That's us pointing to the clouds. Those are clouds
of birds, now we see, one whole cloud of birds.

There we are pointing out the car windows.
October. Gray-blue-white olio of birds.

Never-ending birds, you called the first time --
years we say it, the three of us, any

two of us, one of those just endearments.
Apt clarities. Kiss on the lips of hope.

I have another house. Now you have two.
That's us pointing with our delible whorls

into the faraway, the trueborn blue-
white unfeathering cloud of another year.

Another sheet of their never ending.
There's your mother wetting back your wild curl.

"My daughter leaned hard to the side in her car seat, stuck her finger to the window and said, 'Those are the never-ending birds.' She was 5 or 6, and this was years ago...we could not see the beginning or ending of the massive migration," writes Baker in Poet's Choice. "My wife is now my ex-wife. Our daughter is a high-school senior...we are still our own kind of family. We are doing just fine. And today, in early October, in Ohio, the sky is full." He adds, "Some poems are close to memoir in their recounting of autobiographical fact. Some are like short stories, fictive and imagined. All the good ones, I believe, whether they are fiction or fact, convince us by their authenticity."

We spent Saturday enjoying the Countryside Artisans October Studio Tour, when Sugarloaf Mountain artists host open houses and demonstrate their crafts, plus many of them have cider, homemade baked goods, and Halloween treats. We started at Something Earthy Pottery, which is new to the tour and which has wonderful, useful serving pieces, where we bought an owl garlic keeper. There was also a lot of lovely, inexpensive jewelry for sale, plus several goats and a pony outside. Then we went to Art of Fire, the glass studio which gives demonstrations -- they are also the glassblowers at the Maryland Renfaire. My kids love that one both because they get to watch projects from molten glass till they go into the oven to be annealed, plus there are several cats on the premises. From there, we went to Iron Antler Forge, a metalworking shop, where Daniel Stuart was demonstrating fairly traditional blacksmith techniques but whose fabulous sculptures, tables, and fantasy art were on display next door.

Since we were right near Little Bennett Regional Park, we decided to go hike a bit in the woods -- the leaves upcounty are changing more quickly than down here, so it was very pretty outdoors. Then we stopped at Dusty Road Pottery, a pretty studio in an old dairy barn, and A Paca Fun Farm, which was not in fact on the studio tour although they do sell wool and woven crafts, but they had signs on the road announcing that they were open for visitors and we can never resist because they have more than a hundred alpacas plus two huge sheepdogs that visitors are allowed to pet if the animals permit. We ended up at Sugarloaf Studio and Dancing Leaf Farm, which are next door to one another, the former the studio of a painter and sculptor who has beautiful watercolors of local scenery as well as drawings and paintings of nature from all over the world, the latter a farm that sells hand-dyed yarns, some made from the sheep grazing outside. 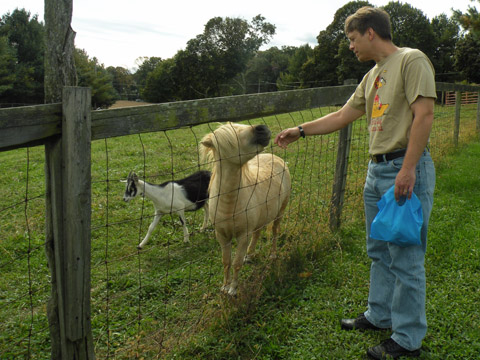 Paul was greeted by the pony plus a goat at Something Earthy Pottery Studio. This is the owl garlic keeper that we bought there, since last night our garlic was sprouting under the sink. Plus it's adorable. Many of the regulars at Art of Fire were away at the Renfaire, but we got a demonstration of how to create a blown glass pumpkin anyway. We also got a demonstration of metalworking at Iron Antler Forge, where the artist was making decorated tongs. The trees at Little Bennett Regional Park were showing signs of autumn. Most of the alpacas at A Paca Fun Farm were out enjoying the sunshine. 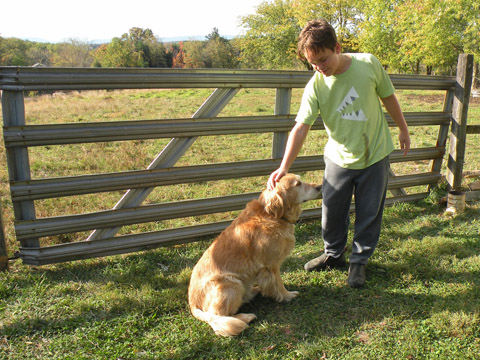 Adam is always happy to see the animals at Dancing Leaf Farm... ...while I am always happy to see the yarn and woolens there.

We had a late dinner of leftovers, watched Due South's "Easy Money," and now I must go to bed because we promised to take the kids back to the Renfaire Sunday since it's likely the last free day everyone has before it closes! Kat, I will take photos for you!
Posted by littlereview at 12:04 AM