I washed my hair the morning I got married put
on
red boots found license woke C. set off for City
Hall
had ceremony drove to Fairway got cups of tea
sat
at bench on boardwalk watched man & woman
at
next bench come almost to blows over her having
put
ketchup on his egg sandwich too bad they couldn't
just
trade hers had the sausage Don't ever put ketchup
on
my egg sandwich he clenched You handed it to me
she
cawed meanwhile their aged father paying no heed
was
pulling out bits of paper one after the other That's not
it
he'd say That's one from four years ago beautifully
mild
he searched on his wife I bet kept track of the list
when
she was alive bluish mist lifted sank on the water a
statue
(Liberty) slid us a wave from way across the bay.

I had the pleasure of lunch with Hufflepants, originally scheduled for my house with bad TV, but we ended up meeting at the mall, where we went to pretty much every store Dementordelta and I didn't hit on Monday plus some that we did -- Bath & Body Works (because I had to buy Twilight Woods roll-on perfume), Temptation ($3 peace-sign bracelets), Old Navy (Halloween t-shirts on sale for $3.75), Hot Topic, Spirit of Halloween, and the food court, to which I brought a peanut butter sandwich because I still haven't figured out what in the mall I can safely eat, which sucks, though means I have more money for stupid stuff like roll-on perfume and bracelets. In the late afternoon my mother came over with old family photos that my sister wanted scanned for a project for her daughter's Bat Mitzvah, so I present to you some not-very-cleaned-up historical family photos scans: 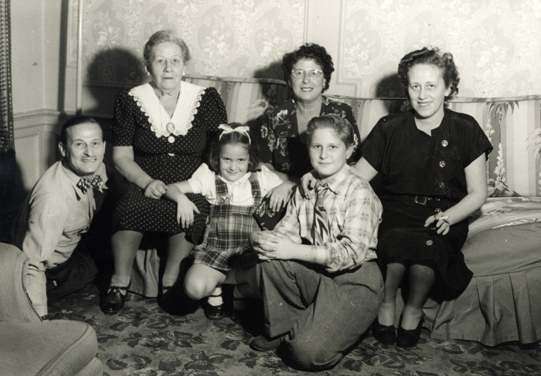 My mother's father, grandmother, aunt, mother, and brother, clockwise around her in the middle.


Glee pleased me this week, not because any of my complaints about the characters or the writing have diminished -- I can't care about anyone, can't feel sorry for anyone, but I love the music despite the bad lip-syncing and I can only be relieved to have an episode with no Terri. Spoilers: Though having Sue's teeth blunted over some caricature of lurve makes me very sad, though the sight of her in that suit was almost worth the price of admission. Did we know before that Puck's name was Noah or that he was supposed to be Jewish, because oh please, his mother is a worse stereotype than Rachel whom I can forgive at moments when I remember that she has two daddies...anyway, his "Sweet Caroline" made the first half-hour for me, and Emma's Audrey Hepburn impression made the second half-hour (the bad lip syncing there is forgivable because "I Could Have Danced All Night" is just as off in the movie). Really, though, as favorite moments go, the Sue/Will jitterbug wins it all -- I am thinking that Sue and Terri should shack up together and I might forgive some of the rest. Either that or Puck should get Terri pregnant. Also, I really howled over Finn's "Leaders are supposed to see a future where things are better, like Thomas Jefferson or that kid from the Terminator movies."

Eastwick remains my Wednesday night unapologetic guilty pleasure (spare me the insensitivity-to-Wiccans speech, it's Halloween season and there are more damaging witch stereotypes on half the doors in my neighborhood, plus Eastwick takes itself even less seriously than Glee). Spoilers: I love "The Naked Now" episodes -- well, I suppose this is more the Red Hour from "The Return of the Archons," but it falls into that same fine "hey, let's find an excuse for an orgy!" category, and is just plain fun -- whereas Heroes has to slap its desperate-for-ratings lesbian kiss all over YouTube before the episode airs, Penny and Joanna just go there, and it's awesome -- the first Joanna moment I've loved all series! Okay, Roxie needs to respect Mia and stay out of her diary, and Kat needs to knuckle down and just decide to be who she is -- if she wants to run a 5K for charity, she should tell Darrell to go fuck himself and do it, THEN sing in a piano bar. Oh, and isn't pastor wife also Finn's mother? I had a very confused crossover moment there! I wish they'd drop the ominous predictions and just have fun, because I get the impression from its ratings that the series isn't going to be around long enough to solve its mysteries.