Letter to Tsvetaeva
By Nina Zivancevic
Translated by Charles Simic

Ah, now our time has come, Marina.
You visit me at night while I sit alone
with a glass of wine in hand
—you who do not need a key—
for you the most secret door of my room
is always open:
abandoned by our mothers,
we both loved children and poetry,
and hated Paris and poverty,
wearing the one and only dirty dress,
we kept clear of landlords and cops.
We both had blue eyes, many lovers,
and the incapacity to live with anyone.
Ah, I almost forgot: our fathers, too,
had similar jobs—they occupied themselves
with museums and art . . .
Still, I got angry yesterday
when someone called me Marina . . .
I'm neither important nor odd enough
to send daily reports to Beria . . .
How furious I was that you hanged yourself!
What courage, what a double cross, what a lie,
what a betrayal of poetry . . .
Marina, I'm a child as you can see,
about you and life I really know nothing.

It was a busy yet unexciting day -- many dozen photos cropped, color-corrected and otherwise manipulated, three loads of laundry washed, sorted and folded, two packages wrapped, addressed and taken to the post office, one long walk enjoyed since the weather was gorgeous, things like that. I tried to read the news but between not being able to figure out who's standing where on the public health care option, not seeing what the problem is if there's no McDonalds in Iceland and not being happy with the direction of Change We Can Believe In, I decided to let Adam try to explain Spore to me instead -- which was probably an even bigger mistake! I did refrain from buying my penguin Tarot cards, which I consider an accomplishment -- I did not refrain from buying myself Tarot cards with my $5 plus 30% off coupon at Borders over the weekend. There was a petting zoo that included these sheep... ...and some small round goats and chickens, who were sharing a pen. It is rare for me to think that a cow is particularly pretty -- usually I just think they're adorable, if they're clean -- but this one had unusual markings and was really quite beautiful. 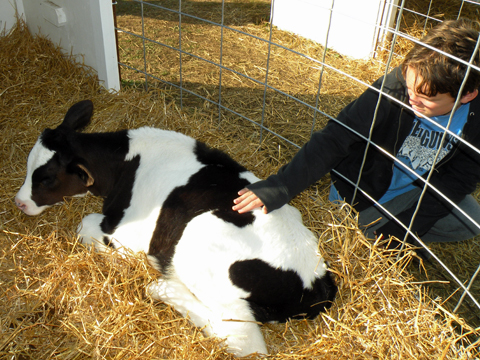 Adam got to pet another calf as well as several at South Mountain Creamery earlier in the day. Smaller children could have pony rides at Jumbo's. 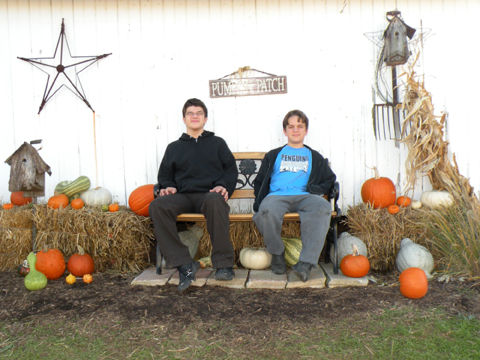 Here are my kids surrounded by a very few of the pumpkins for sale there. I'm not sure what kind of squash these are -- I don't think I've ever eated one -- but they were my favorites in the "weird pumpkins" patch!

After dinner (tuna pomodoro, mmm) we watched last week's two-part Sarah Jane Adventures episode, "The Mad Woman in the Attic," which despite being a reset-button episode was very enjoyable -- more so than the season premiere, I thought. Spoilers: I love that everyone still thinks about and talks to Maria even if she's not appearing and Rani resents how much attention she gets (are we to understand from the alternate future-forward at the end that Rani marries Luke and they go visit Maria in America?). I love the seaside resort, which reminds me of the one we visited in Plymouth a few years ago; younger son won a free game of miniature golf there, and still has the token to go back and use. I didn't mind Sarah Jane's expected speech about friends being all you need -- it reminded me of Lisa Moscatiello's song "In the Here and Now" (which, really, could be my theme song for Sarah Jane, and I'd make a songvid if I made songvids). I particularly love the flashbacks with previous Doctors, even alongside the prediction of Ten returning when such predictions always turn out to mean bad news in Whoverse.

Then we watched Heroes, which is like three different shows as it follows three different storylines, and as has been happening for the past two seasons for me, it feels so disjointed that I have trouble having any overall positive feeling. Spoilers: I am very, very tired of the Sylar-in-Matt's-head storyline, I don't think Greg Grunberg is a good enough actor to play it really well, of course they wrote Janice preferring Sylar in bed to Matt, it all feels vaguely icky and badly done. Whereas now that they got their gratuitous lesbian kissing out of the way, I actually really like Claire's uncertainty with Gretchen, which makes sense to me for someone who's been through what she has (and I'd sort of forgotten about the fact that she's a virgin). I'm wary of it because I have no confidence that these writers will do anything besides exploit the whole two-college-girls-together thing, but I appreciate how it was handled this week. As for HRG and Tracy, Ali Larter and Jack Coleman are two of my favorite actors in the franchise, but they seem to be floundering for things to do with them, and I only felt badly up to a point for the boy who can't help killing people...he could so easily have grown up to be Sylar.
Posted by littlereview at 12:30 AM