Poem for Monday and Fredericksburg Battlefields

The Crossing At Fredericksburg
By George Henry Boker

I lay in my tent at mid-day,
Too full of pain to die,
When I heard the voice of Burnside,
And an answering shout reply.

I heard the voice of the General,--
'T was firm, though low and sad;
But the roar that followed his question
Laughed out till the hills were glad.

"O comrade, open the curtain.
And see where our men are bound,
For my heart is still in my bosom
At that terrible, mirthful sound.

"And hark what the General orders,
For I could not catch his words;
And what means that hurry and movement,
That clash of muskets and swords?"

"Lie still, lie still, my Captain,
'T is a call for volunteers;
And the noise that vexes your fever
Is only our soldiers' cheers."

"Where go they?" "Across the river."
"O God! and must I lie still,
While that drum and that measured trampling
Move from me far down the hill?"

"How many?" "I judge, four hundred."
"Who are they? I'll know to a man."
"Our own Nineteenth and Twentieth,
And the Seventh Michigan."

"O, to go, but to go with my comrades!
Tear he curtain away from the hook;
For I'll see them march down to their glory,
If I perish by the look!"

They leaped in the rocking shallops,
Ten offered where one could go;
And the breeze was alive with laughter
Till the boatmen began to row.

Then the shore, where the rebels harbored,
Was fringed with a gush of flame,
And buzzing, like bees, o'er the water
The swarms of their bullets came.

In silence, how dread and solemn!
With courage, how grand and true!
Steadily, steadily onward
The line of the shallops drew.

Not a whisper! Each man was conscious
He stood in the sight of death;
So he bowed to the awful presence,
And treasured his living breath.

'Twixt death in the air above them,
And death in the waves below,
Through balls and grape and shrapnel
They moved--my God, how slow!

And many a brave, stour fellow,
Who sprang in the boat with mirth,
Ere they made that fatal crossing
Was a load of lifeless earth.

And many a brave, stout fellow,
Whose limbs with strength were rife
Was torn and crushed and shattered,--
A helpless wreck for life.

But yet the boats moved onward;
Through fire and lead they drove
With the dark, still mass within them,
And the floating stars above,

So loud and near it sounded,
I started at the shout,
As the keels ground on the gravel.
And the eager men burst out.

Cheer after cheer we sent them,
As only armies can,--
Cheers for old Massachusetts,
Cheers for young Michigan!

They formed in lines of battle;
Not a man was out of place.
Then with levelled steel they hurled them
Straight in the rebels' face.

"O, help me, help me. comrade!
For tears my eyelids drown,
As I see their starry banners
Stream up the smoking town.

"And see the noisy workmen
O'er the lengthening bridges run,
And the troops that swarm to cross them
When the rapid work be done.

"For the old heat, or a new one,
Flames up in every vein;
And with fever or with passion
I am faint as death again.

"If this is death, I care not!
Hear me, men, from rear to van!--
One more cheer for Massachusetts,
And one more for Michigan!"

I spent the day in and around Fredericksburg with my family and Dementordelta, who came up from Richmond. We had never visited those battlefields, though my in-laws were there recently -- Paul's mother's ancestor fought at Totopotomoy Creek and was wounded before Cold Harbor -- so we went to the sites of the battles at Chancellorsville, the Wilderness, and Spotsylvania Court House, plus the Chatham mansion which was used as a Union headquarters and hospital and the Old Salem Church which harbored refugees and wounded soldiers. We saw two short films about the battles in the park visitor centers and had lunch at a picnic table in the gardens at Chatham, which its last private owner had designed to look like an English country estate. Fredericksburg's Sunken Road and the heights that were devastating to the Union plan of attack. Bullet holes remain in this house, which was blasted during the battle. This is the woman who described the battle from the point of view of a civilian in the town. 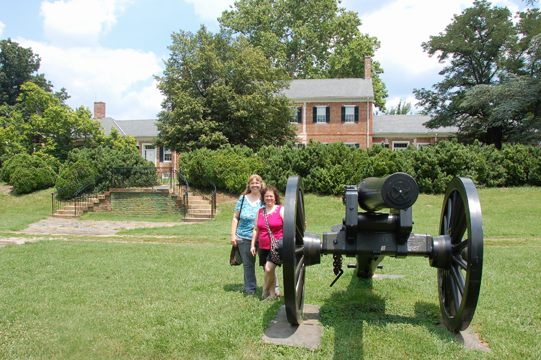 Me and Delta behind Chatham Manor, a Georgian mansion built by a Revolutionary War patriot who owned many slaves. They later rebelled and the Union seized the property from later owners. 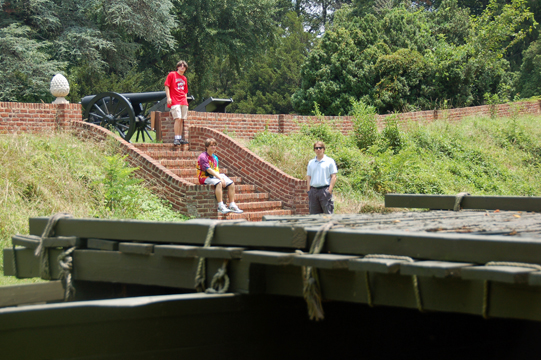 Here is my family near a replica of one of the pontoon boats used to cross the Rappahannock River. This marker is supposedly at the spot where Stonewall Jackson fell after being shot accidentally by Confederate troops. Earthworks and markers at the Bloody Angle, Battle of Spotsylvania Court House. The Old Salem Church, which twice wound up in the middle of the fighting and tried to protect civilians and the wounded.

After several more hours of driving and hiking around the more remote battlefields talking to some rangers and a woman reenacting the role of a Fredericksburg resident, we had dinner at Carlos O'Kelly's which may be the only Irish Mexican restaurant I've ever heard of. We hit some traffic driving home, so we had a quiet evening and watched Harry Potter and the Chamber of Secrets, whose Quidditch scenes still go on too long, as does the final battle with the basilisk, but which has so much delicious Lucius Malfoy (even that ridiculous last scene where he tries to curse Harry) that I forgive it.
Posted by littlereview at 12:04 AM