The Bottom
By Denise Duhamel

I stopped drinking on my way down the hill
to the liquor store when two guys pulled up
and tried to drag me into their pickup. I crossed the street
then ran in the opposite direction, puffing
against the incline. The stranger thrust into reverse
and, when I wouldn't talk to him,
threw a bag of McDonald’s trash at me,
Stuck up bitch. I stopped drinking
when I realized I was fighting
for the vodka at the bottom of the hill
more than I was fighting against the terrible
things that could have happened to me
inside the cab of that rusty Chevy. I stopped drinking
before cell phones. I stopped drinking
after Days of Wine and Roses. I stopped drinking
even as I kept walking to El Prado Spirits
and the guy behind the counter who recognized me
asked if I was alright. I didn't tell him
what had happened because he might have called
the police and then I would have had to wait
for them to arrive to fill out a report, delaying my Smirnoff.
I stopped drinking even before I had that last sip,
as I back ran up the hill squeezing a bottle by its neck.

This was the poem of the day yesterday at the Academy of American Poets. It stuck with me, so I am swiping it. Ka-Ching! is her 2009 collection.

My Tuesday consisted largely of chores and schlepping. Adam had plans to go see Harry Potter with his friends, but the friend's mother who was going to drive couldn't do it, so I ended up taking them. Then I had to rush back to grab lunch and take Daniel to his driver's ed class, and after an hour of reading news about the potential impending collapse of Britain's government and catching up on mail, I had to go out again to retrieve Adam and friends, then wait for Daniel.

I did get the laundry folded, and I did get to watch the very black comedy Keeping Mum, which Dementordelta loaned me when she was here over the weekend. It has Maggie Smith in a hilariously wicked role, plus Rowan Atkinson, Kristin Scott Thomas, Patrick Swayze, Emilia Fox, and a ridiculously young Tamsin Egerton -- and its exteriors were filmed in Cornwall and the Isle of Man, so it's really gorgeous. Here are some more photos from Kenilworth Aquatic Gardens last weekend: 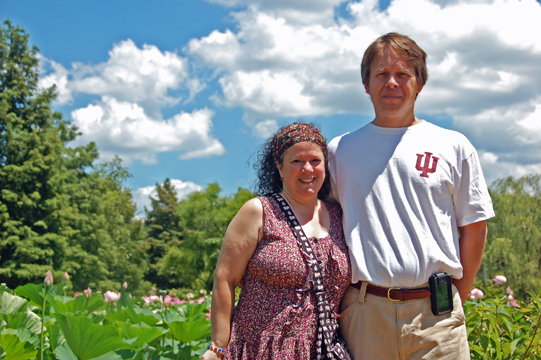 Happy Birthday, Adam!
Posted by littlereview at 12:02 AM