Poem for Tuesday and Baltimore Aquarium

Postcard from Rockport
By April Lindner

Cold as a slap, this indigo sea,
where we clamber on blonde-fringed rocks,
where someone's tarted up the fishing shacks
with red paint and artful nets.

The sun floats like ice in a highball.
Condos train their plate-glass gazes
on the horizon, amnesiac
to past conspiracies of cloud,

storms that shook homes and swallowed boats.
Just north, a granite wall's etched with the lost—
decades of their half-remembered names.

Imagine waking always to this spread—
each day the ocean swelling
to loll at your feet, exotic pet.

The galleries glow, ripe with impasto,
sunsets we could be bite into:
raspberries, marzipan, seafoam like cream.

Their artists shoot for the numinous,
overlook the jagged and impermanent:

Since we did not receive the predicted snow on the day before President's Day, we spent Monday in Baltimore at the National Aquarium -- with Adam's girlfriend, with Dementordelta who managed to drive up into Maryland even though southern Virginia did get several inches of snow on Sunday (Paul made us hoecakes to make up for the ones we didn't get at Mount Vernon for George Washington's birthday), and with Hufflepants who came over and met us in Baltimore (we were hoping to see Emynn too but traffic thwarted that). The aquarium was as crowded as I have ever seen it -- packed exhibits, completely full dolphin show -- but the flying foxes and sloth put in appearances and all the puffins were out, so it was a lovely afternoon. 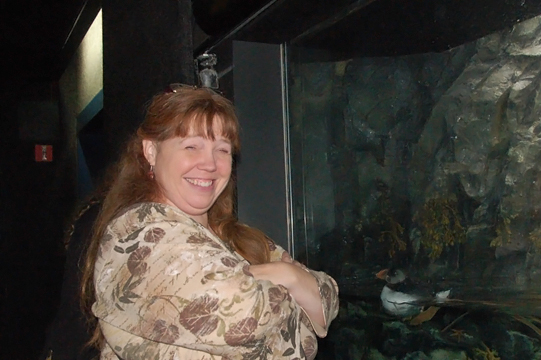 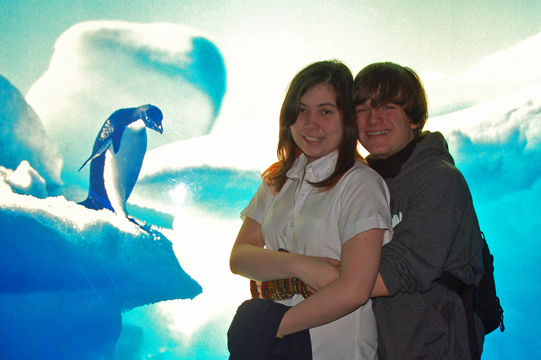 We all had dinner at the Noodles & Company in Harborplace, which is looking very different than the last time we were there -- Phillips Seafood has moved into the old Power Plant building across the harbor, there are a bunch of new clothing stores in what used to be the main food building -- but the food was good and the company was too. Then we came home to watch Smash, which I'm enjoying greatly apart from how horrid they're making Tom's assistant. Now we are watching Jon Stewart's wonderful commentary on the contraception debate -- nothing shockingly original but he has a much bigger audience than people passing around memes on Facebook, and he's trying to drag Brian Williams into the debate and HE has an even bigger audience.
Posted by littlereview at 12:18 AM