Poem for Thursday and Broken Arm

When I saw you ahead I ran two blocks
shouting your name then realizing it wasn’t
you but some alarmed pretender, I went on
running, shouting now into the sky,
continuing your fame and luster. Since I've
been incinerated, I've oft returned to this thought,
that all things loved are pursued and never caught,
even as you slept beside me you were flying off.
At least what's never had can’t be lost, the sieve
of self stuck with just some larger chunks, jawbone,
wedding ring, a single repeated dream,
a lullaby in every elegy, descriptions
of the sea written in the desert, your broken
umbrella, me claiming I could fix it.

Today was Daniel's last official day of high school -- he still has a graduation rehearsal, the senior picnic, and graduation itself, but today was the final day of classes and exams. This is, needless to say, a somewhat traumatic moment for me, since I just graduated from high school myself a few short years ago. I remember vividly when Daniel was a very small boy, the first time we saw a clip from Toy Story -- he must have been two or three. There was a Disney Store in our local mall then with a big flat-screen on which they showed previews and scenes from upcoming Disney movies all day long, and they showed the scene in which Buzz Lightyear, having discovered that he is not an action hero but only an action figure, tries to fly and ends up crashing and his arm falls off. I was afraid my little boy was going to be traumatized by this, but he only announced, "Broken!" (which in those days was pronounced "Boken!") and, for several hours afterward, kept repeating at odd moments, "They need to fix that man's arm." Apparently he always had complete confidence that they could do so.

Well, I just spent Daniel's last day of high school getting his arm fixed. His Origins of Science teacher challenged his math teacher from last year to a kickball game, and recruited students who didn't have an exam that period to play, and the field was muddy and Daniel slipped and put out his hand to break the fall and shortly afterward I got a call from the health room nurse, telling me that my son really needed to have an x-ray but he was refusing to go home until he'd taken his last test, so he wouldn't have to be the only senior in a school full of freshmen through juniors in two days. Since we live half an hour from the school, there wasn't a lot I could do to stop him; at least he hadn't injured the hand he writes with, and he had an A in the class, and the exam didn't count for a big part of the grade, and I was hoping that the fact that he felt well enough to go take a test and pick up his yearbook meant that it was only a sprain. So he took the test, and I went to pick him up, and we went to his pediatrician who said that she could get us into an orthopedist instead of making us deal with the hospital after she took a look. She took off the Ace bandage and it was immediately obvious even to me that there was a bone sticking out at an angle bones aren't supposed to stick out.

So off we went to the orthopedist, whose office is thankfully a five-minute drive from the pediatrician, and who got him in the back for an x-ray less than fifteen minutes after we arrived even though they'd sandwiched us in as a last-minute emergency. The break was actually not in a bone in the wrist but near the bottom of the radius (the long bone in the arm) and the doctor said Daniel must still be growing because the fracture went across the growth plate; he told me a Salter-Harris designation but I don't remember. They used one of those casts made of soft material that wraps around wet and then hardens, so son got to pick the color -- I told him to get red so it will match his graduation robes, since the boys at his school wear red and the girls wear white. He goes back in two weeks for an x-ray to see how the bone is mending, but he will still have a cast on for graduation the second week in June -- the first one he's ever had, after a childhood without a single broken bone. :( 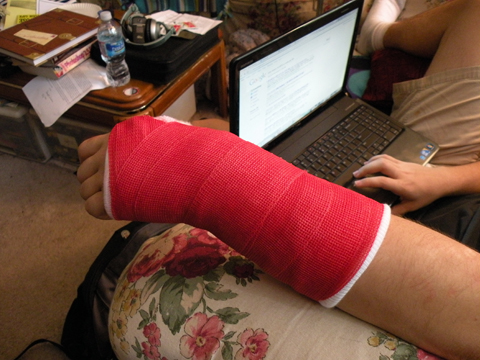 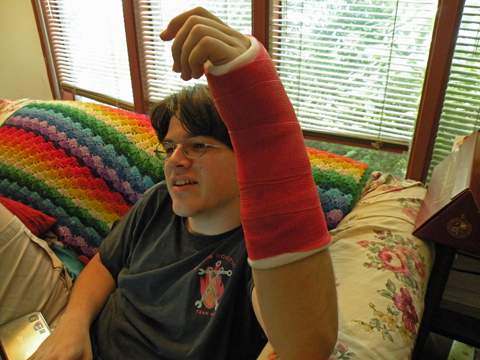