In My Craft or Sullen Art
By Dylan Thomas

In my craft or sullen art
Exercised in the still night
When only the moon rages
And the lovers lie abed
With all their griefs in their arms,
I labour by singing light
Not for ambition or bread
Or the strut and trade of charms
On the ivory stages
But for the common wages
Of their most secret heart.

Not for the proud man apart
From the raging moon I write
On these spindrift pages
Nor for the towering dead
With their nightingales and psalms
But for the lovers, their arms
Round the griefs of the ages,
Who pay no praise or wages
Nor heed my craft or art.

It took me all morning to do a few minor chores and get laundries in, and I'm not sure where the afternoon went. Daniel came home and announced that he had taken his Tuesday math test on Monday so he doesn't have to go to school tomorrow. Adam and I spent half an hour trying to capture a cicada killer wasp which had somehow gotten into the house and was buzzing furiously against the front window (those things are two inches long and buzz like lawnmowers -- I've heard that they don't sting but I did NOT want to find out that was incorrect).

After dinner we all watched the final episode of The Chicago Code, a show we all really enjoyed and thought was very well acted -- I am sorry to see it leaving broadcast and pleased that the writers wrapped up the major storylines of the short season (and I hope Jason Clarke is back on TV soon). Then we watched the Memorial Day episode of Sanctuary, which was crack -- Evil Abnormal Nazi weapons, Hitler doubles -- but Amanda Tapping in a beret and the return of Peter Wingfield make up for a lot. Here are some more photos from Homestead Farm on Sunday: 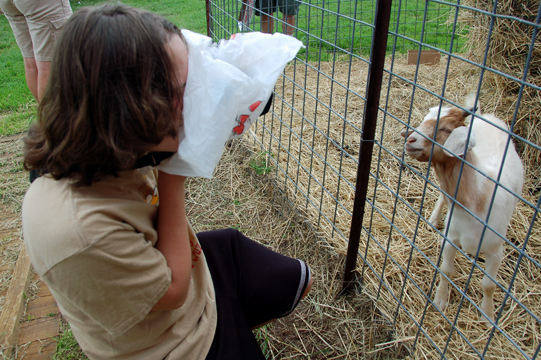