Two or more strands twisted together,
Oxides and baser salts, admixture
Of carbon, metal of lash and scourge,
Strung like a virus, barbed intervals,

Stapled by hand to bois d'arc poles,
Woven by machine, "devil's rope"
Of vast interior plains,
Of meadows bruised by their own

Unloved, unloving; that to name these
Does no political good, but as precision
Is polemical, against vague statement
And circular evasion, as the sharp angle of sun

And crossed wires together body forth a spark,
It is some kind--cold, unmusical, utterly itself,
Keeping cattle in, or the enemies of sheep
Out.

It was a fairly uneventful Wednesday. I did a bunch of work in the morning and I thought I was going to take Daniel out to try on tuxedos in the afternoon, but by the time he got home, he ended up having too much homework, so that got postponed a day. I was trying to find a program to create AVI files from DVDs and tested it on a DVD I had made from an ancient videotape of my father's parents on The John Davidson Show in 1980 or '81, and since it worked, I posted it on YouTube.

In fact, most of the entertainment of my afternoon and evening took place online courtesy Geoffrey Rush, so here he is on last night's Colbert Report talking about Colin Firth's debilitating British accent, Barbossa working for Colin's great-great-great grandfather, and not being a method actor, and here he is at the National Movie Awards saying of winner The King's Speech, "I've often felt the film was like a royal wedding between a monarch and an Aussie, and it also felt like we had two billion viewers."

Evening television was Doctor Who's "Curse of the Black Spot" and this week's Confidential, "Ship Ahoy," which entertained me in a very superficial way and had the awesome Hugh Bonneville making up for a lot, yet failed to move me even a little bit in the way that pretty much every Rose Tyler did. Spoilers: Given the title and preview, I was hoping for either a POTC homage or a POTC parody -- we were clearly getting death marks on the palm and magical coins and walking the plank and all the usual pirate cliches that Bruckheimer et al had such fun with -- but it looked instead like they blew their budget on the ship and fighting effects, and couldn't quite be bothered with anything else.

The abandoned-child storyline was so rushed that when the kid disappeared, I couldn't feel anything either for him or for the father, and the siren never looked other than cheesy to me, plus her hospital looked so much like a Torchwood set that since I'd already guessed the missing crewmembers weren't dead but transported, I immediately guessed the rest of the episode...though the CPR, with no water whatsoever coming out of Rory's lungs, was so fake that for a moment I thought he was really going to be dead, again, and that was why Amy's pregnancy was so off-again, on-again. A pair of sheep get the spa treatment at the Maryland Sheep and Wool Festival last weekend. The festival takes place at the Howard County Fairground, and features many breeds of sheep from all over the country. ...and rabbits, both wool-producing angora bunnies and these adorable pet bunnies. 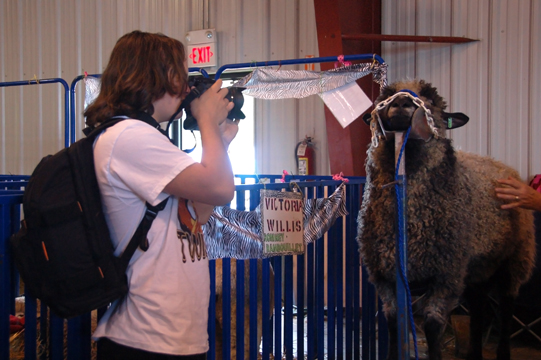 Adam photographed distressed diva sheep being readied for their close-ups. The sheep come in all sizes, colors, and thicknesses...