Spent the morning being Rita Skeeter...err, that is, writing up a Shatner interview and doing news bullets, and then had to get organized for son's science fair in the evening. The school always arranges to have a number of speakers, though they did not have anyone this year quite so exciting as local celebrity weather forecaster Doug Hill, who was there last year. We were surprised to see that there was a panel on the science of nuclear bombs and unsurprised when the principal announced that that had been cancelled! We went to a very fun seminar on the National Zoo, taught by a science teacher from another middle school who volunteers weekends and is working very closely with the newborn sloth bear (previously he worked with the baby cheetahs and tigers) but he talked mostly about the baby panda since that is what people want to know about...he joked about how the hairless baby sloth bear is just not as cute and nobody names the invertebrates when they cite their favorites (though my younger son said the kiwi, which also just had a baby). 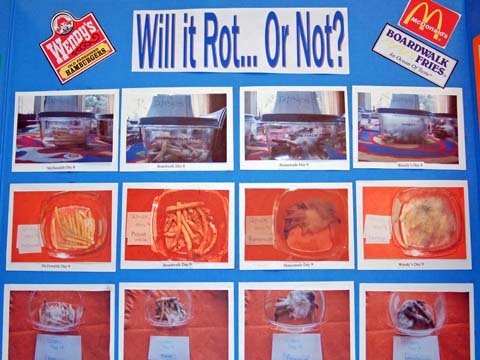 There are always a large number of students who work on egg parachutes, whether playing different kinds of music affects plant growth and what kinds of Lego bridges can support the most weight, but some students work on really practical things. Here someone took french fries from McDonalds, Boardwalk, Mom's kitchen and Wendys to see which would decompose the fastest. As you can see from this photo, the McDonalds fries, which are on the far left, showed no change at all after nine days left out in the sun. Conclusion: McDonalds fries are not actually made with organic material. At least, that was my conclusion! 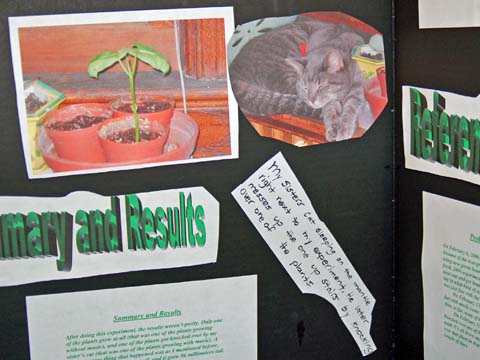 Here a student has learned an important lesson: if you leave the science fair project where the cat can get at it, the cat will have a significant impact on the experiment's results. (There are people who have cats AND plants? How is this managed?)

Using pets in experiments is, however, apparently very popular. As I should know well. The first gerbil I ever owned, I got for a science experiment to see whether it would respond to a bell summoning it to food. (The gerbil responded any time anyone was around whether there was food or not!) This student concluded from her parakeet's behavior that a parakeet prefers toys made of natural wood to plastic toys. She attributed this to the bird living in the wild in Australia. I attribute this to the wood tasting better. 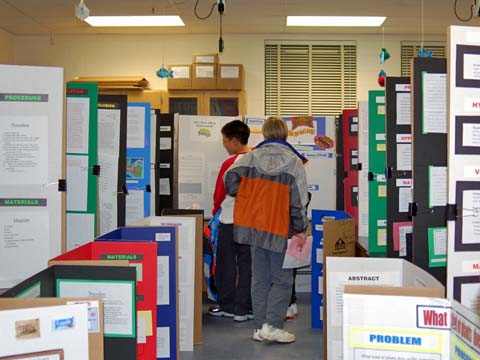 And it is always fun to hear what students have to hear about other students' projects and how they would have done them better.

Since I talked about rodents,
Posted by littlereview at 12:05 AM