Poem for Sunday and Port Discovery

Flat you are as a door mat
and as homely.
No crust, no glaze, you lack
a cosmetic glow.
You break with a snap.
You are dry as a twig
split from an oak
in midwinter.
You are bumpy as a mud basin
in a drought.
Square as a slab of pavement,
you have no inside
to hide raisins or seeds.
You are pale as the full moon
pocked with craters.

What we see is what we get
honest, plain, dry
shining with nostalgia
as if baked with light
instead of heat.
The bread of flight and haste
In the mouth you
promise, home.

From Piercy's The Art of Blessing the Day: Poems with a Jewish Theme.

For this month, since the Maryland Zoo was unable to open on time due to damage from the snow, we were able to get into Port Discovery children's museum in Baltimore, and even though our kids outgrew it more than five years ago, three of the four of us wanted to return for nostalgia's sake (Thing One went grudgingly and walked around looking agonizingly bored the entire time). It's one of many places where I never really took photos because I'd only just discovered digital photography and I always assumed we'd go back eventually...there are lots of things I used to do with my kids that I'd have spent more time enjoying, the last time, had I had any way of knowing that it would be the last time while it was happening.

Thing Two climbed on the big Kidworks structure in the middle, though he's too tall to fit through a lot of the tubes and tunnels now. He said it's not as much fun as the St. Louis City Museum, upon which it is evidently modeled, but he enjoyed it anyway, as well as Miss Perception's Mystery House where the rooms are all out of proportion -- he compared it to being in a Tim Burton movie. We also went to the Adventure Expedition to ancient Egypt, which starts with a manufactured bazaar, then goes into a manufactured tomb. My kids were amused at the kids who were scared of both the tomb and the dark tunnel under the "kitchen sink" in the Mystery House.

We couldn't decide whether to go visit the historic ships in the Inner Harbor -- we're members of the museum -- or go to Harborplace first to get ice cream for older son, who appeared to be greatly beleaguered by being dragged around. On the way to Harborplace, which won out, we spotted Michael Rosman -- the Squire of the Wire from the Maryland Renaissance Festival -- setting up to perform in the amphitheater, and since we all love his Renfaire routine, we sat down to watch. It was his first show of the season and he confessed that he had forgotten his bowling ball so he couldn't do his most spectacular juggling stunt, but he juggled on a rocking surface and on a unicycle, plus did Cirque du Soleil parodies and jokes at the expense of audience members (falling off unicycle into women's laps, getting men to help him fix his wedgie, etc.) We came home for Masala tofu and dal makhani, plus Gigi on TCM (spectacular sets and costumes, enjoyable songs that I've known since childhood, appalling storyline that lacks Colette's biting irony). 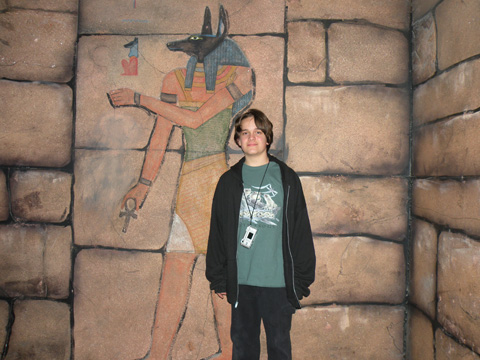 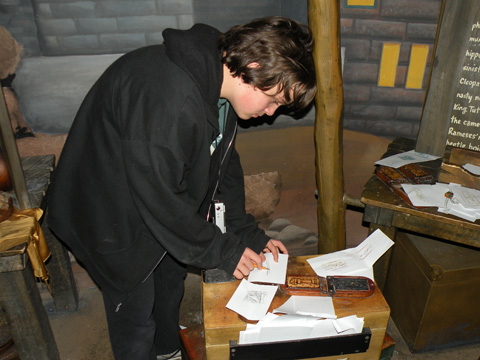 ...and makes a rubbing of a hieroglyphic bird. The massive central climbing structure of the museum... ...even has its own Mount Rushmore. 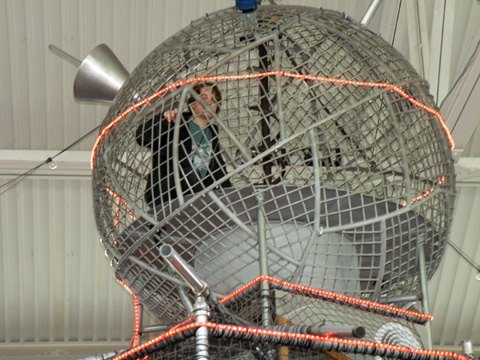 Here is Adam at the very top of the Kidworks construction. The very popular Curious George was visiting the museum in conjunction with an exhibit on being curious about science... 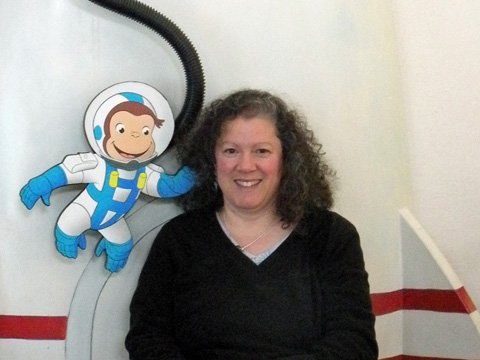 ...but I only got a photo with the cardboard version on the rocket. Michael Rosman rides a unicycle with the USS Constellation behind him.
Posted by littlereview at 12:15 AM