A Spring View
By Tu Fu
Translated by Witter Bynner

Though a country be sundered, hills and rivers endure;
And spring comes green again to trees and grasses
Where petals have been shed like tears
And lonely birds have sung their grief.
...After the war-fires of three months,
One message from home is worth a ton of gold.
...I stroke my white hair. It has grown too thin
To hold the hairpins any more.

Had it not been for my eyeglasses, I would have had a perfectly nice day. I did laundry in the morning while my father played tennis with Adam, then he took both my kids out to lunch and I got some other chores done. In the afternoon while Daniel went over college material since we're going to visit some schools in and near Philadelphia this weekend, I took Adam out to get a new inner tube for his bike tire and new Rollerblades, since the plastic back on one of his old ones had cracked. Unfortunately, I went first to Lenscrafters to drop off my old glasses to have the finally-arrived, presumably-correct lenses put in, and after I picked them up on the way home and we had frozen yogurt in the mall -- I told Adam that we'd run into my mom there, and I was right -- I put them on at home to see how well I could read with them and discovered that I was just as blind as I had been wearing progressives.

Went back to Lenscrafters for the third time that day; they showed me reading glasses that didn't have my astigmatism prescription but had the right magnification, and I couldn't use them either. They want me to talk to my doctor because based on how I read with no glasses at all, with my distance glasses, and with my old glasses (which it turns out were the same prescription as my distance glasses -- neither the doctor nor the Lenscrafters techs noticed this), they think the new prescription is much, much more powerful than I actually need and is obviously doing more harm than good. The only good to come out of this is that I have my $500+ back -- both for the reading glasses which have never enabled me to read, and for the distance glasses which I now know I didn't need because the pair I've had for the past two years has the identical lenses. Arrrgh.

Evening: meatless sloppy joes for dinner, a bite of chocolate cheesecake for dessert (nope, not keeping Passover all week -- that much matzah and I start praying to destroyer goddesses to end the world), then A Funny Thing Happened on the Way to the Forum on cable because Zero Mostel plus ridiculously young Michael Crawford make many things better even if the plot rivals Gigi in sexism. Hopefully my blood pressure is now low enough to sleep! I got some resolution, at least, on a misunderstanding with an old friend that distracted me for much of the weekend, so that's good news. Buildings high over the rocks of Ellicott City. The Tiber running under the Tea on the Tiber tearoom's rear balcony. 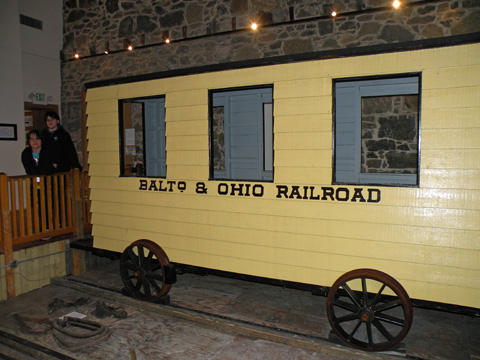 My kids next to The Pioneer, built in 1830 as one of the B&O Railroad's earliest passenger cars. It was pulled by horses. The home within the station of the manager of the freight. One of the restored offices/lounges in the passenger area of the station. A miniature railroad model of the Thomas Viaduct, the first curved multi-span masonry railroad bridge in the U.S., the world's largest bridge of its kind. 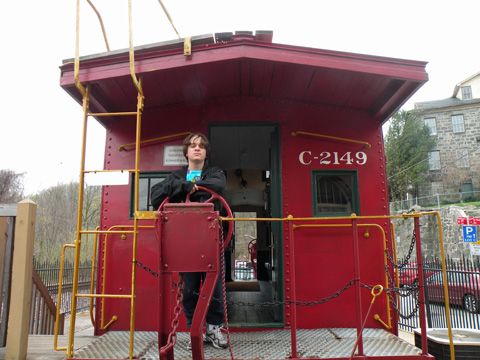 Adam at the rear of the caboose... ...from which there are terrific views uphill of the town.
Posted by littlereview at 12:08 AM