This is the illustration in the print newspaper for this Washington Post article, entitled "What I Bring To the Podium" -- TV producer Peter Mehlman's mock application for the job of White House Press Secretary: 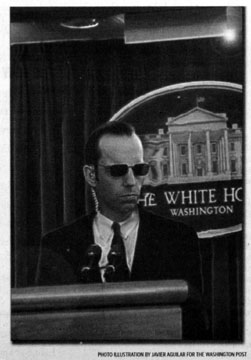 Spent the afternoon admiring my father's new flat screen plasma television that he bought himself for his 65th birthday (we all watched Spider-Man), then playing out back for awhile before going out for teriyaki noodles. My mother made German chocolate cake. Yep, that makes it four days in a row that I've had cake. Blaargh!

In other news, I am finding myself more irked about some aspects of the ending of Angels and Demons the more I think about them. I am really glad I read The Da Vinci Code first and was less focused on exactly how much of a grudge Dan Brown might have against the Catholic Church.

Happy Father's Day everyone!
Posted by littlereview at 10:26 PM