Got A Woman's Guide To Adultery in the mail yesterday. Have not had a long enough stretch with sleeping children to watch much yet but I did put it in long enough to see if the disc was all right, whereupon I discovered that I MUST HAVE SCREEN CAPS FROM THIS MOVIE. Anyone know where I can find any?

And oh! PSA for U.S. shoppers that I forgot to mention. The other day, when I was shopping with my kids, KB Toys had Lord of the Rings playing cards -- two decks, heroes and villains, together in a tin with Frodo etched on it. And even though the packaging has TTT art, the cards are from FOTR so Boromir's on all the threes. Have I mentioned that in addition to Tarot decks, of which I have about fifty, I also collect transformation decks and decks of ordinary playing cards with interesting backs? I appreciate interesting court cards, like the Grateful Dead deck with skeleton aces, jacks, queens, kings and jokers, but much prefer decks where the twos through tens have art on them as well, which these LOTR decks do. They're not quite as nice as the Star Trek decks which have glossier, thicker cards with no repetitive images, but the LOTR tins were only $3.99!

Today, in theory, we are going to the county agricultural fair. I say "in theory" because it is supposed to be over 95 degrees, and I may traipse across the fairgrounds to Borders and sit and read while my husband and kids go on the rides. I don't want to miss the pig show, though. 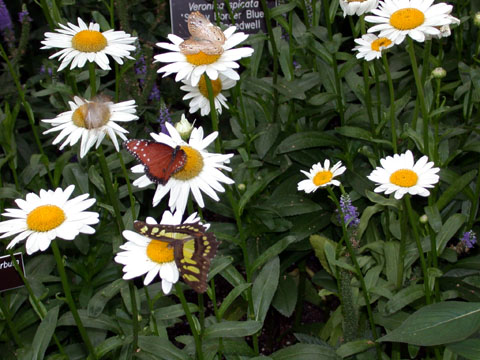 In the Butterfly Garden, Brookside Gardens, Wheaton, Maryland
Posted by littlereview at 12:26 PM