Those who lack a talent for love have come
to walk the long Pier 7. Here at the end
of the imagined world are three low-flying gulls

like lies on the surface; the slow red
of a pilot’s boat; the groan
of a fisherman hacking a small shark—

and our speech like the icy water, a poor
translation that will not carry us across.
What brought us west, anyway? A hunger.

But ours is no Donner Party, we who feed
only on scenery, the safest form
of obfuscation: see how the bay is a gray

deepening into gray, the color of heartbreak.

November is ending the same way most of the month's weekends have gone -- unseasonably warm, absurdly beautiful. We went downtown to the Smithsonian to see exhibits at the Freer and Sackler Galleries and had to avoid stepping on grasshoppers in the parking lot behind the American History museum. The Freer Gallery had a tour of the Peacock Room that also visits several other exhibits, including some of the Japanese scrolls collected by Freer that influenced his aesthetics and several paintings by Whistler that characterize his style and in some cases reflect his interest in Asian art. We walked through the lower-level gift shops and into the Sackler Gallery, which has a current exhibition, Falnama: The Book of Omens, about the art of divination in the Islamic world and how the illustrated Falnama, or Book of Omens, of the 16th century were used to tell fortunes and reflect the culture in the Persian and Ottoman Empires. This exhibit is particularly interesting because many of the stories used as augurs are familiar in Western culture as well (the exile of Adam and Eve, the piety of Abraham, the wisdom of Solomon, the virtue of Mary) but the focus in terms of what's important about the stories is somewhat different particularly in most branches of Christianity. Whistler's The Princess from the Land of Porcelain -- modeled by the daughter of a Greek ambassador to London -- was always intended by patron Frederick Leyland to be the focal point of the Peacock Room. 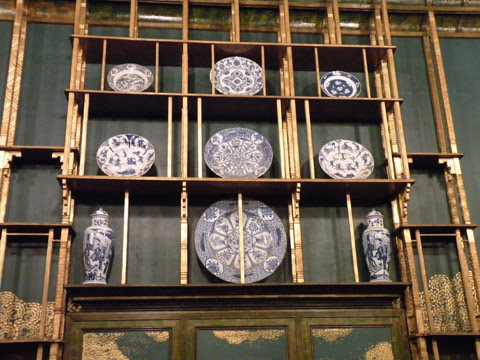 Leyland wanted the room to be his family's private dining room and a place to show off his porcelain collection. (None of the porcelain pieces are Leyland's originals; these are meant to be representative, since the porcelain didn't come with the room when Freer bought it.) 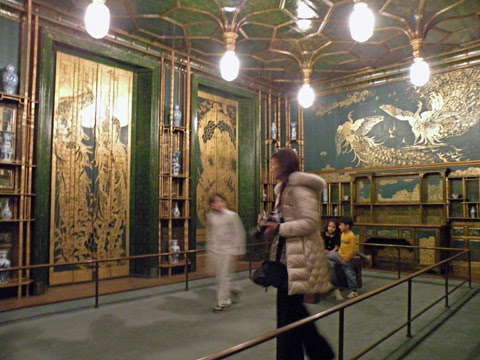 Whistler, who first visited Leyland's home to make small improvements to the painting and its display, did not like Leyland's taste and made many changes while Leyland was away... 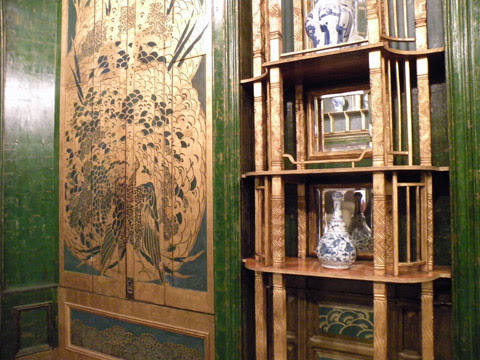 ...including the painting of the peacocks, the gilding of the walnut shelves... 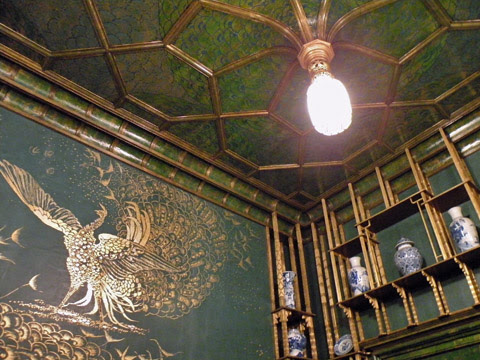 ...and the lacquered peacock feather pattern on the ceiling, which Whistler thought would distract from what he considered to be the ugly lamps. Leyland, who hadn't authorized these changes, refused to pay for all of them and then insisted on paying Whistler in pounds rather than guineas. 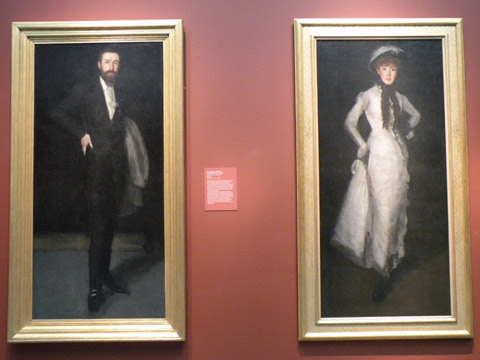 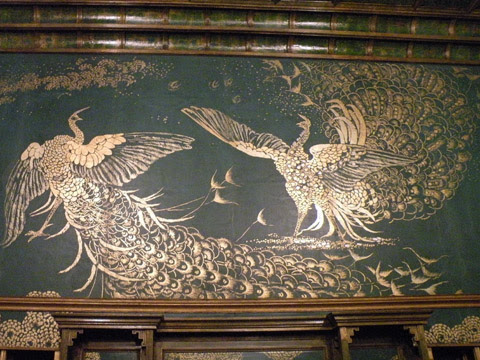 When Whistler became angry with Leyland, he finished the room, but characterized Leyland as a defensive peacock with a white ruffled belly, giving the peacock representing himself a longer, more regal train of feathers. 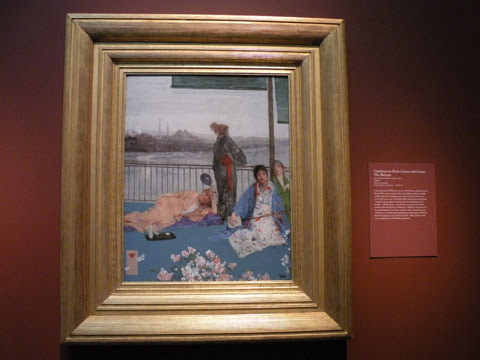 Freer, who adored Whistler's work and was encouraged to study Asian art by Whistler, bought many of his paintings with Asian themes, including this one (Variations in Flesh Colour and Green: The Balcony) which shows women in exotic outfits lounging on a balcony in view of industrial London.

We stopped at the Smithsonian Castle briefly, where we had a snack and looked at the representative collection there from all the museums, plus Smithson's crypt. When we left the museum, the Redskins and Eagles were tied, but the Redskins had managed to lose before we crossed the Maryland-DC line. We came home for dinner -- Paul made jambalaya -- and watched the fourth episode of this season's Merlin, "Lancelot And Guinevere," which is definitely my favorite so far this season though people keep telling me the newest one is excellent -- for all the anachronisms and absurdities of this series, its version of Guinevere is so much more interesting than just about any other in pop culture, including Marion Zimmer Bradley's -- I love just about all her women but not Gwenhwyfar is really hard to like -- that I can forgive almost anything. And Merlin and Arthur are delightful. Twice during this episode when Arthur tossed Merlin into a situation that should have been over his head as a non-knight, declaring, "You think of something," I was positive that Arthur knew Merlin could do magic and was counting on it -- of course then Arthur got to tell Merlin he was an idiot, but I'm starting to think that by the time Merlin gets around to revealing his secret, Arthur will merely say, "I know." Now the Ravens and Steelers are in overtime and I'm exhausted!
Posted by littlereview at 12:33 AM