Saturday we got up, left Catford after a brief visit to the aviary in the courtyard of the place where we were staying, and drove through lovely, occasionally sheep-filled countryside to Bath. We went first to have lunch Seafoods Fish & Chips, reputed to have excellent cod, which reputation it happily deserves. Then we went to the Jane Austen Centre, which was very interesting even though Jane Austen has never been one of my favorites (don't fret,
Posted by littlereview at 6:46 PM No comments:

On Friday we took the train from Catford to the Docklands Museum, which is terrific...a history of London via the Thames, including a full reproduction of "Sailortown" in the 1800s with a model pub, animal emporium and nautical equipment. The museum traces the history of London from the Romans to the present, and as an extra surprise there was a replica of the Discovery -- one of the ships that founded the colony at Jamestown -- docked just outside, along with a couple of other historic ships. We met one of
Posted by littlereview at 7:45 PM No comments:

I expect to be too tired for poems on this trip, sorry! (I expect to be too tired lots of days to answer comments too, sorry again!) Our flight from Dulles to Heathrow felt very fast. Younger son and I watched Happy Feet -- I specifically wanted to watch something I had seen before in case I fell asleep, and even though they were showing Bobby, I would rather rent that and see it uncut -- while older son and
Posted by littlereview at 4:42 PM No comments: 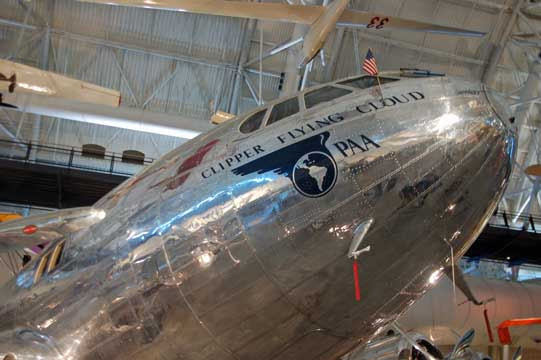 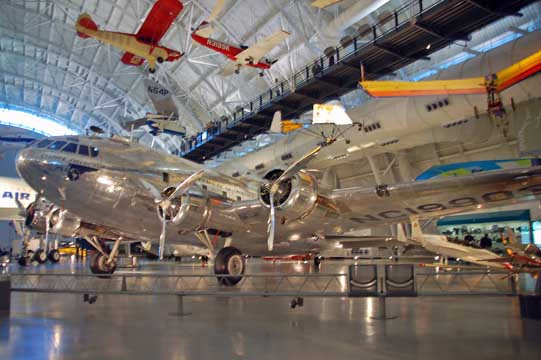 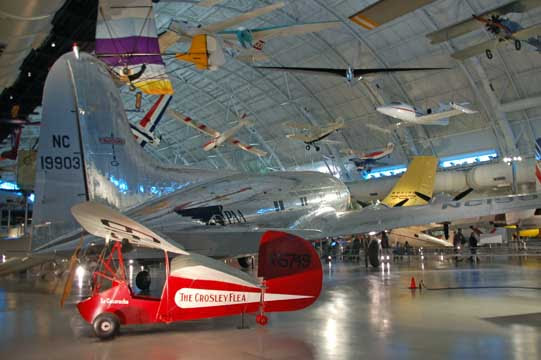 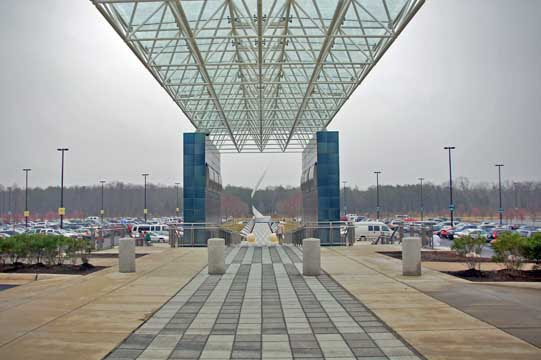 What percentage of British electrical outlets are the round two-prong as opposed to the rectangular three-prong? How do I know which kind of plug I need for what? We're taking the red-eye Wednesday night so I ought to be around till tomorrow afternoon, if anyone desperately needs to talk to me. (I know I was discussing with someone in Birmingham possibly hooking up when I was over there, and now I can't find the exchange of comments even though I was sure I had put it in memories...if that was you and you still want to see about maybe meeting up, perhaps at the Dudley Zoo, let me know!)
Posted by littlereview at 12:01 AM No comments:

Am starting to be crazed with trip preparations, so will keep this short. Had lunch with
Posted by littlereview at 12:22 AM No comments:

I spent most of Sunday being spiritual, first at younger son's Hebrew school where they were having a Life Cycles exploration including a mock Bar Mitzvah and a mock wedding, then celebrating Ostara at
Posted by littlereview at 12:04 AM No comments:

It was my husband's birthday, so we spent the day with his parents. Our original plan was to go downtown to various museums, but we had forgotten that the DC marathon was Saturday morning and traffic was expected to be disastrous, so instead we went out to lunch at the Corner Bakery and then went to the National Air & Space Museum's Udvar-Hazy Center, which they had never visited. It wasn't quite as colorful as the last time we were there (Halloween), as the guards weren't dressed as stormtroopers, but the crowds were much smaller and we spent more time looking at the early aircraft and World War I exhibits than we had previously. My father-in-law wasn't feeling terrific -- his pacemaker has been giving him trouble -- and my mother-in-law was somewhat subdued because they are leaving Sunday morning to go to her brother's funeral, but we had a nice afternoon with them chatting about how much money is wasted on war technology instead of technology for the betterment of humankind and things like that. 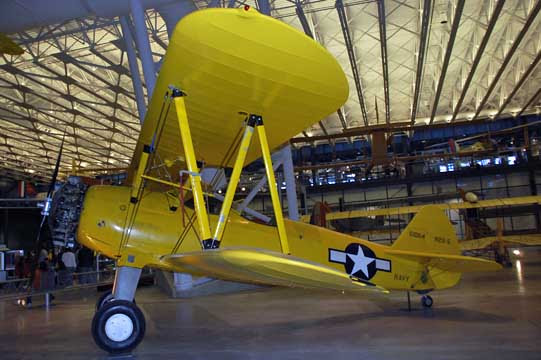 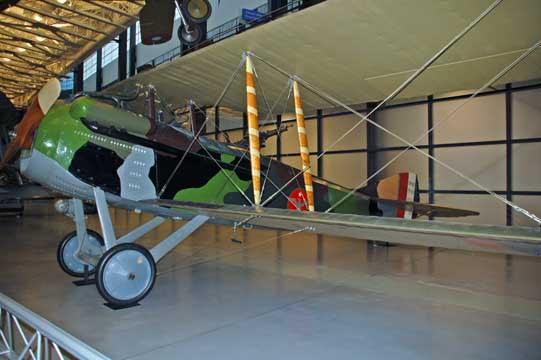 The French SPAD XVI, introduced in January 1918, so named because it was built by the Societe Anonyme Pour l'Aviation et ses Derives. 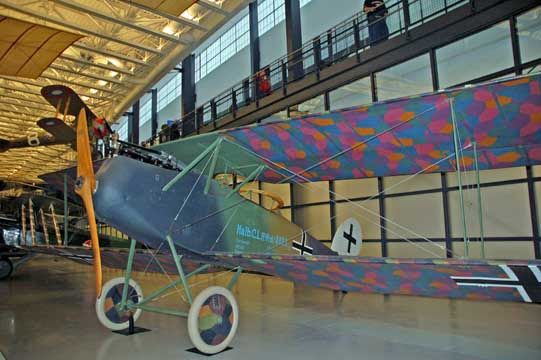 Germany's Halberstadt CL.IV, which the museum called one of the best ground attack aircraft of World War I. This one was captured and transferred from the US Air Force Museum. My son's favorite aircraft name: Focke-Achgelis Fa 330A, a rotary-wing kite used in the 1940s by German submarines to locate enemy targets in the Indian Ocean. 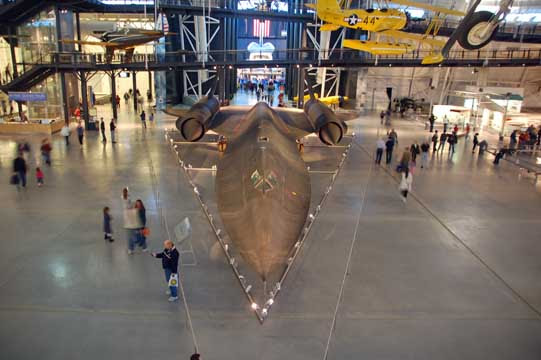 The SR-71 Blackbird Stealth, built by Lockheed, a Mach 3 reconnaissance aircraft retired in 1998. It was never invisible on radar but it was able to outfly anything fired at it. You can see the shuttle Enterprise in the hangar behind it. 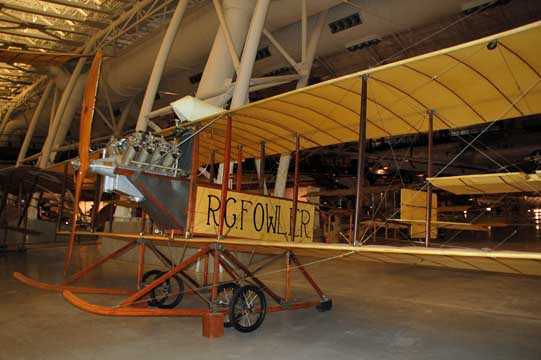 And a non-warplane, the Fowler-Gage Biplane, flown ocean to ocean across Panama by Robert G. Fowler in 1913.

When we got back to Maryland from Virginia, we stopped at Borders because I wanted to pick up Out of Egypt (had it on reserve and had a coupon only good through Sunday), as I intend to read everything Andre Aciman ever wrote and although I can get False Papers for fourteen cents plus postage from a used dealer, it won't arrive before we leave on Wednesday. Then we went to Tara Thai, where we tore through five main dishes plus soup, and then came home for birthday cake. So I am quite contentedly stuffed, though I feel weird talking about how much pleasure I get from food right now because I just got a snide comment from a non-LJ friend about how I should work out more and maybe I won't get headaches. Another is lecturing me on how narrow-minded I am not to want to pay $10 to see 300, yet another is giving me tsuris about fannish stupidity...do other people ever have days when they think they must be really fucked up if even their friends have so many issues with them? I would have had a pretty nice day without this in spite of the fact that my in-laws are grieving.

My father is doing really well in his office NCAA pool and Kansas losing helps, since he picked Ohio State. I am now reluctantly rooting for Georgetown to beat NC. Was thinking of The Prestige when I read "Why Not Just Hold a Seance?", an article about how a bunch of not-terribly-successful Houdini authors got one of his relatives to go along with a plan to exhume his body to see whether he was murdered rather than dying after unsuccessful treatment for a burst appendix after being punched in a stunt gone wrong. It was his rival, Angier! Have just watched Daniel Radcliffe on Jonathan Ross courtesy The Leaky Cauldron and am howling both at Dan explaining how many people have criticized his sexual technique while Ross protests that he's too young and at Ross' "Go see Equus if you want to see great theatre or you just want to see Harry Potter's cock!"
Posted by littlereview at 12:10 AM No comments: