Older son had high school orientation this morning...he wasn't thrilled about being in school in the summer and I am distinctly ambivalent about having a child in high school! My mother was out in the same direction picking up the Bar Mitzvah albums (FINALLY -- they were finished months ago but she wanted to pick out frames for photos and this was the first time she and the photographer managed to get together) so she picked son up and we met at a local shopping center where she was meeting a friend for lunch. I took the kids to do a couple of chores, then home for awhile, then my father took them to the pool while I wrote Trek news (Quinto braces self for Trekkies who know ten thousand times more about Spock than he does, Shatner and Collins flirt on Fan Collective - Captain's Log and waaah why can I not get my CBS contact to write me back about a review copy of this one because although I have all the episodes, I want that commentary!).

Had dinner with
Posted by littlereview at 12:19 AM No comments:

My parents took the kids to Baltimore for the Orioles/Yankees game, where they had good weather but a most unfortunate result.
Posted by littlereview at 12:11 AM No comments:

We got up insanely early this morning to go to Breakfast with the Penguins at the Maryland Zoo in Baltimore. Younger son and his best friend -- who was still not asleep at 1 a.m. -- were wide awake and very chatty the whole way there. To our surprise there was already a big crowd when we got there, so we were in the later group for breakfast (eggs, pancakes, croissants, fruit, has browns, plus bacon and sausage that I didn't eat) and for throwing fish to the penguins in the water. Ascot, the penguin we met as a baby at the breakfast last year, is now an adult and still a "penguin ambassador" so he was waddling around on the grass with a keeper, and some of the other staff were showing penguin eggs and bones, showing photos of the nest boxes (there are several breeding pairs at this zoo with new babies every year) and running a silent auction, at which we won a painting by a penguin named Honkers. *g*

After we fed the penguins, we walked around the zoo, beginning in the African section since that's where the penguins are -- disinterested giraffes, chimpanzees with adorable babies and a lion who roared loudly all through the breakfast but had roared himself to sleep by the time we saw him -- then the Maryland section, which has a bog with local turtles and frogs, a cave beneath an otter pond and, at the moment, a bunch of African spoonbills and cranes who've been moved out of the watering hole because it's being renovated. There are also kids' things to climb on and a farm with goats that they can brush. And Italian ices! 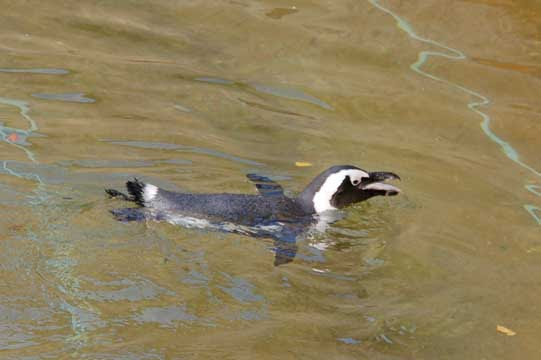 This lucky bird at Breakfast with the Penguins has caught a fish which it has in its mouth. 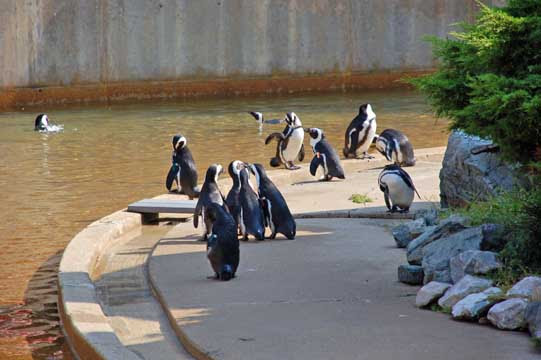 Other penguins waited for more fish. It was 94 degrees, so many of the penguins spent a lot of time in the water. 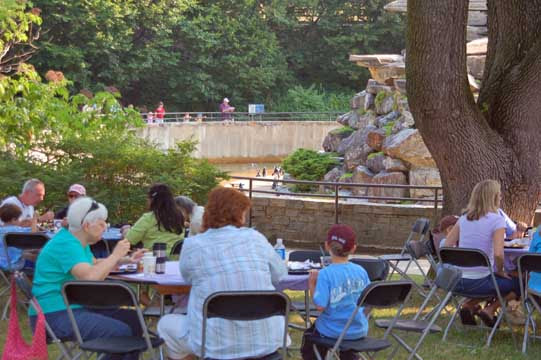 Here are the people eating breakfast before the birds got theirs. The tables were set up in a lovely shady area behind sunny Rock Island. This is Ascot, one of the Maryland Zoo's ambassador animals, with a keeper. 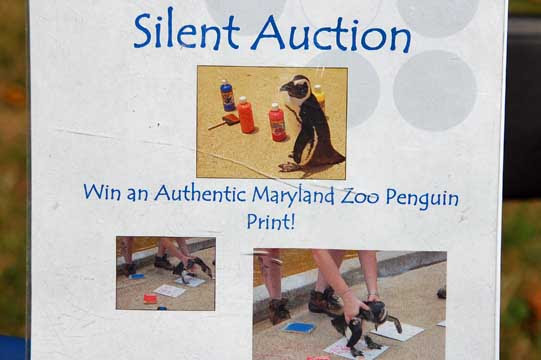 The zoo had an auction of art created by the penguins (at gala nights these go upwards of $100). This is the painting we won, made by a bird who apparently prefers knocking paint cans over to actually walking around in paint. The money goes to penguin rescue. 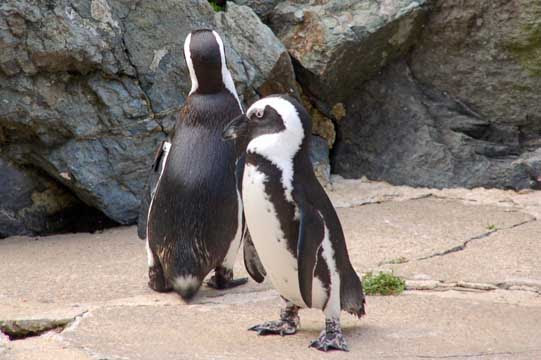 We think the bird with her back to the camera is Honkers, the artist, since she has a brown wing band, but she was not in the mood for meeting her public! 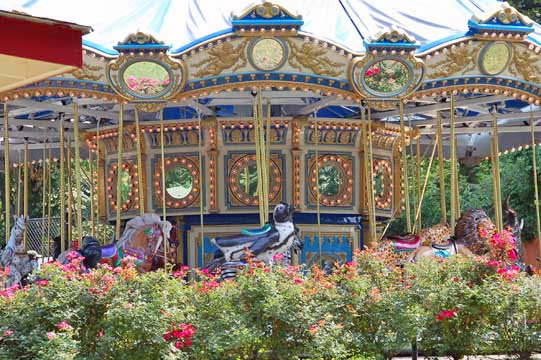 Penguins are a big deal at this zoo. Even the carousel has one!

Sunday my parents are taking the kids to the Orioles-Yankees game (they had four tickets and I think were hoping
Posted by littlereview at 12:01 AM No comments:

I tried to sleep late Friday to regain my equilibrium because I have to be up very early Saturday for Breakfast with the Penguins in Baltimore, but I only succeeded in giving myself one of those all-day-sleepy headaches from lying in bed too long. I was supposed to have lunch with
Posted by littlereview at 12:35 AM No comments:

TV Review: Star Trek: The Next Generation's "Home Soil
Posted by littlereview at 11:58 PM No comments:

I had a very quiet Thursday, which I suspect I needed as the headache and aching sinuses I had all morning are finally not bothering me so much. Wrote one of the Star Trek stories I didn't get to yesterday while I was sick, tried to keep up with Comic-Con news -- original Star Trek Remastered on HD-DVD holds no appeal for me whatsoever, I'd rather watch the grainy originals as I remember them even if the new ones weren't going to cost $200+ for a single season -- and maybe I'm really just past my capacity to enjoy new Star Trek because I felt far more enthusiastic about Enterprise than I feel about Abrams!Trek. Maybe if I'd liked a single one of his TV shows or movies for more than a couple of episodes, I'd feel differently. Even Armageddon only works for me because I can't resist most of the cast.

Meanwhile real space news coming out of NASA was scary and the top law enforcement official in the US is also the biggest crook and today's top search on Yahoo is Lindsay Lohan, who along with Paris and Britney must be on someone's payroll to distract the world from anything that matters. Well, and professional athletes and people connected with them. I'm cranky because once again I see very little evidence that blogging is power at all and Obama should shut up and work on his own platform before he starts criticizing Clinton's and it's never good when I spend too much time reading internet news! The sundial at Brookside Gardens, with numbers movable for Daylight Savings Time. 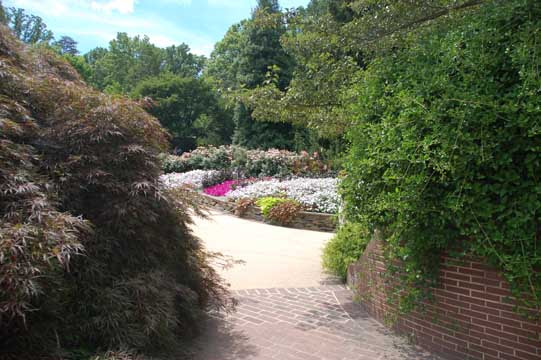 July is a very colorful month in the gardens. Lots of varieties of roses, and lots of late summer annuals. 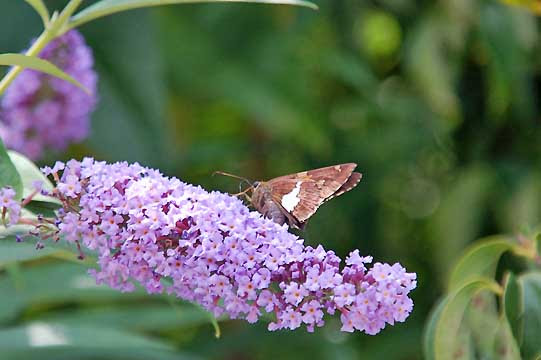 Plus butterflies and moths even on the outdoor plants... 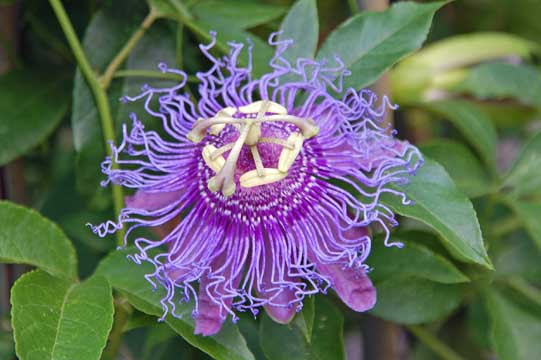 ...and gorgeous passion flowers (thank you,

Friday evening for younger son's birthday we are taking him to see The Simpsons with his best friend. I hope it's good!
Posted by littlereview at 12:05 AM No comments:

THIS Is What They Kept Us Waiting For?

Quinto confirmed as Spock though staying on Heroes, Kirk not yet cast, and a poster that makes the London Olympics graphic designers look brilliantly creative?

Spent the middle of the afternoon at the doctor's office after twice blowing my nose and ending up on the floor because the room was spinning for five minutes. Had to call
Posted by littlereview at 12:11 AM No comments:

Yay yay yay LJ came back before I managed to get to bed! I haven't posted a nightly entry in GreatestJournal since January 15th, 2005, and boy did it feel strange. If I didn't know that much of San Francisco had suffered a blackout, I'd wonder whether LiveJournal pulled the plug so all of us threatening to bail over terms of service realized how much more convenient it would be just to stay put. On the other hand, I found a surprising number of people over on GreatestJournal and InsaneJournal, so obviously there's a decent amount of emergency organization going on elsewhere.

I had a pretty good day. Lunch with
Posted by littlereview at 12:32 AM No comments:

I would hereby like to announce that summer colds suck. Not that I want to complain too much, because I am so glad that if I had to be sick, it was this weekend when I intended to stay in reading anyway and this week when the kids are in camp and I don't have to schlep all over the place, nor am I at the beach, but I took Nyquil last night and slept insanely late and still feel like there's cotton in my head and I have to get up insanely early because
Posted by littlereview at 12:02 AM No comments:

Slept late after not sleeping much at all in the early hours of the night; I still have a raging sore throat, which seems ridiculous in July, but if it had to happen I am just glad it's now and not in two weeks when we're going to the beach. Spent the late morning answering comments and jotting down ideas that range from crack to complete and utter crack, then gathered up the kids and went to Brookside Gardens at Wheaton Regional Park, which was having its annual butterfly show, Wings of Fancy, in the greenhouse. 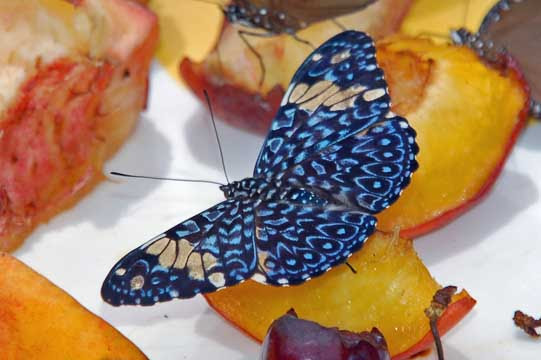 A Red Cracker (don't ask me why they're called that when they have no red, I'm just going by the chart) tastes a peach at the butterfly display. 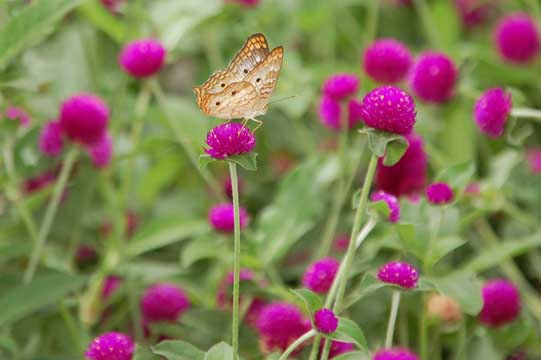 I believe this beauty is a White Peacock... 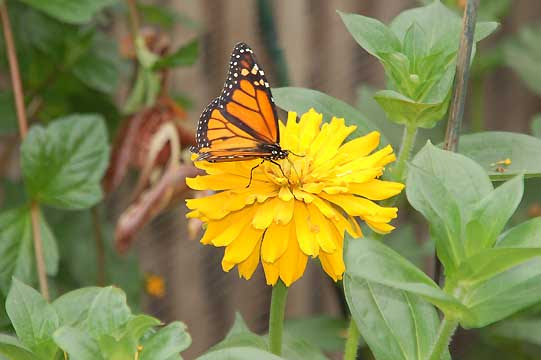 ...while this is either a monarch or its imitator, a viceroy... 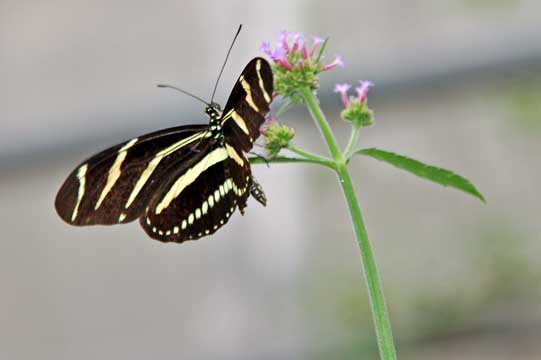 ...and this is a zebra longwing. 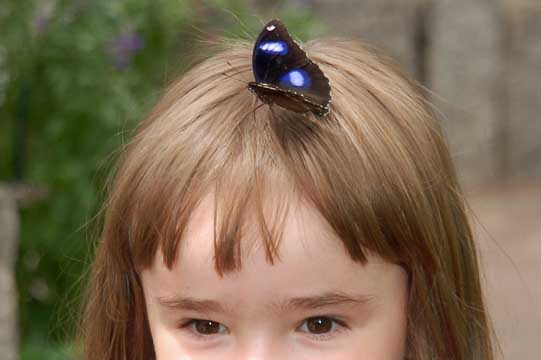 One of the lovely things about the exhibit is that butterflies and children actually mix quite well. It's quite easy to find oneself with a Grecian Shoemaker on one's sleeve (this is me, photo taken by my husband)... 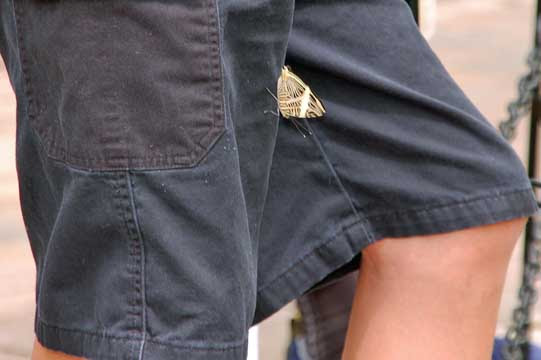 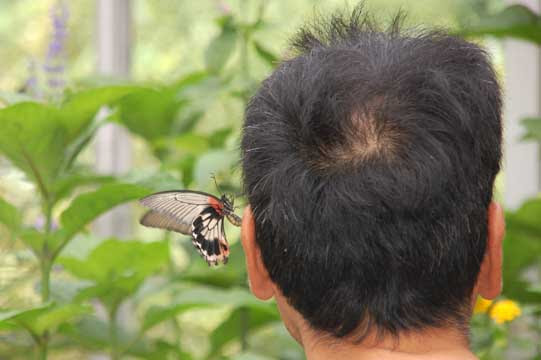 ...or, if one is very fortunate, flapping wings in one's ear (this is a complete stranger, as is the little girl in the top photo, and I cannot positively identify either butterfly either).

And other than a visit to Rodman's for some necessary food items like P&G Tips, that was my excitement for the day. Though I'm sure I had something else to say, but have spent all evening under the influence of Very Evil People and have forgotten. *smooches Very Evil People in gleeful delight* Tomorrow I must catch up on Star Trek gossip ("Leonard Nimoy says absolutely nothing at convention!") and e-mail with relatives...apparently my cousin took offense at my non-absolute adoration of DH. Hopefully by dawn the Nyquil will have worked and I will be able to breathe and swallow normally again!
Posted by littlereview at 12:16 AM No comments:

Guess what I did pretty much all day! I won't lie, I got a head start and read as much as I could stand yesterday. Slept late because my throat and head are still not right, had lunch with my kids, sent them off to my parents and sat down to take notes. Drank tea, ate German Chocolate Cake ice cream, kids came home and started reading their copy, kept taking notes till our late dinner, then typed and here I am trying to catch up on everyone else's notes!

Am feeling a bit down, but that's because several of the people I usually chat with about fannish things are out of town, doing their own thing, still reading or completely apathetic, not because of anything that happened in DH or the sense of anti-climax though I am sure that will come. This fandom has seen me through a number of friendships, writing partnerships and social groups online, and I'm expecting a slow diffusion like with Star Trek and LOTR. Will dig in my heels and hope the people who say they're sticking around really do, one way or another. 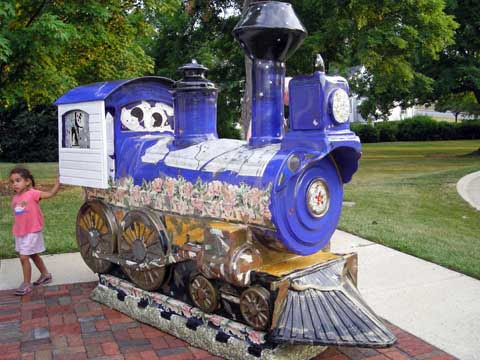 The night we saw As You Like It in Gaithersburg, this art by Michael Griffin Kane was on display. It's for a City of Gaithersburg "Art in Public Places" program. I am trying to find out whether there are others besides this one at City Hall near the train station. 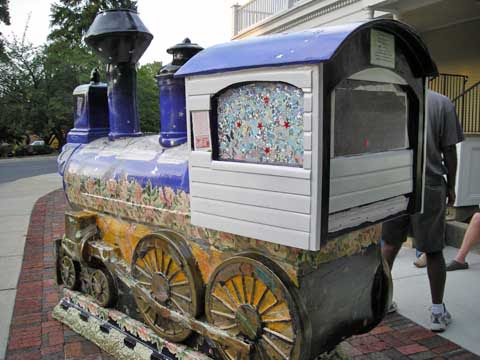 I like the stained glass window effect and the flower collage, too.
Posted by littlereview at 12:32 AM No comments: