TV Review: Star Trek: The Next Generation's "Too Short a Season"
Posted by littlereview at 12:59 AM No comments:

I completely lost three hours of today to one of the worst migraines I've ever had, and I'm still a bit fuzzy (I took a double dose of Imitrex, which my doctor said it would be all right to do but I've only ever done once before -- I just hope the weather has pushed through, if that was a factor, because it wasn't nearly as hot today as yesterday and that time of the month is almost past). Didn't do a great deal, anyway; took the kids to the library and afterward stopped in the mall in search of penguin Jibbitz for younger son but they were all out, though we did find older son a Halo t-shirt he desperately wanted and since we were in Hot Topic, I had to buy myself one of the brand new awesome Snape t-shirts.

Wrote a review of "Too Short a Season", which was somewhat better than I remembered, though still not precisely good. The kids wanted to watch Click which is on On Demand for free till the end of the month, so I figured we should grab it while we could. Parts of it I really liked and parts of it I really couldn't stand, which has tended to be my reaction to every Adam Sandler movie I've ever seen. For one thing, it's painfully male-focused, about a guy whose regrets in life nearly all have to do with his father and his son (his wife's just kind of there, and all he really seems to notice about her is that she's hot, which, being Kate Beckinsdale, she can't really help; if I were her I'd have run off with Sean Astin as soon as he showed up), and for another thing, some of the humor is just so unnecessarily mean-spirited that it's hard to watch. The movie's saving grace is Christopher Walken, playing a riff off his character from The Prophecy, which is really too delightful for words.

Lost dinnertime to migraine (my parents probably think I was avoiding them but there is not a damn thing I could do about it; I could barely hold my head up, if husband had not woken me I would have slept the entire time they were gone). But I was delighted to read about how my cats have domesticated me: "Why Do Cats Hang Around Us? (Hint: They Can't Open Cans)".

Posted by littlereview at 12:08 AM No comments:

The major events of my day were an hour-long traffic jam on a ride that should have taken less than fifteen minutes, picking
Posted by littlereview at 12:02 AM No comments:

I don't have a heck of a lot to report. Father took kids to the pool. Wrote up an entertaining interview with Nana Visitor and a boring article on the latest on fan films (curious: does anyone besides fan filmmaking fanboys actually watch those things?) Was listening to Kate Rusby and realized that her song "Exile" is also Lisa Moscatiello's song "Exile" and I love both versions of it. Oh, and we watched the wonderful Paul Simon tribute on PBS from the The Library of Congress Gershwin Prize for Popular Song, with Simon and lots of his cohorts over the years, including not only the obvious (Garfunkel, Ladysmith Black Mambazo) but old footage with George Harrison and on Saturday Night Live and new performances by Alison Krauss, Marc Anthony and lots of others. If this is on in your area I highly recommend it. 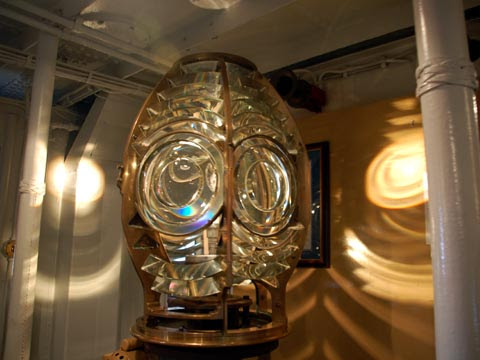 This was formerly the lens of the light aboard the Lightship Portsmouth, built in 1915. 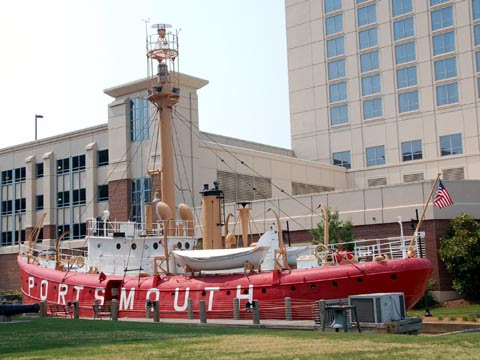 The ship is now in permanent drydock near the Portsmouth Naval Museum. This is the kitchen... 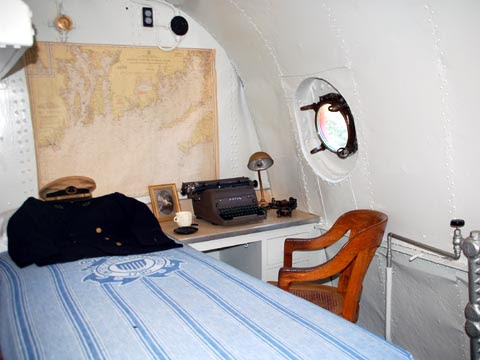 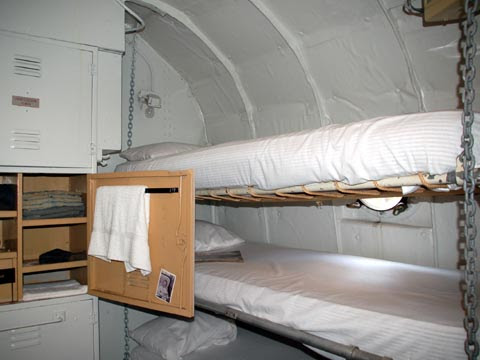 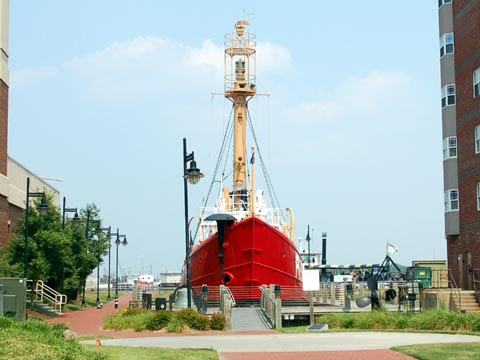 And here is a view from the street side, with a riverboat ferry passing behind the ship in the Elizabeth River.
Posted by littlereview at 12:03 AM No comments:

I don't have a lot to report, other than my kids' clothing drawers are cleaned out (though do not tell younger son that yes I AM throwing away his ripped gray sweatpants, nor that the school t-shirt he wore today was his brother's yesterday until I put his size eight in the giveaway pile). Most of older son's stuff is still in wearable condition after 2-3 years of ownership. Most of younger son's stuff is ready for the scrap heap after six months, whether it was new or a hand-me-down. I don't understand exactly what he is doing to his clothes!

All this was accomplished while younger son was visiting a friend and older son was distracted outside on his scooter. Husband's laptop screen appears to have died, so there was no online gaming possible (this means no TV for me if I want to be on the computer, as I can't see the TV from my computer and can't use the laptop, so let's hope it's a quick fix). I would like to mention that if I have to write up one more interview with Kurtzman and/or Orci explaining that they love Star Trek but they can't talk about the movie, I will scream -- I am hoping that Patrick Stewart's 40-years-younger girlfriend gets pregnant or something just to have something else to write about. These are the penguins of the Virginia coast. Well, actually they're from Africa, living at the Virginia Beach aquarium... 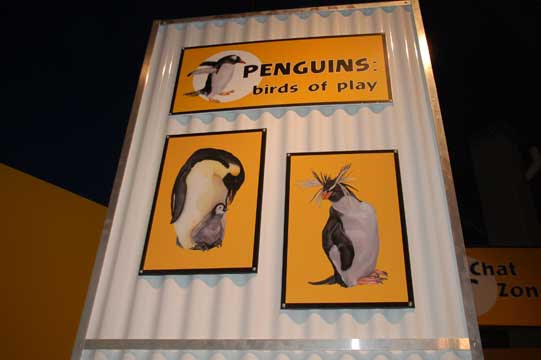 Because there are only six penguins, a lot of the exhibit is interactive, like this race to see whether people can carry eggs on their feet the way Emperor penguins do. 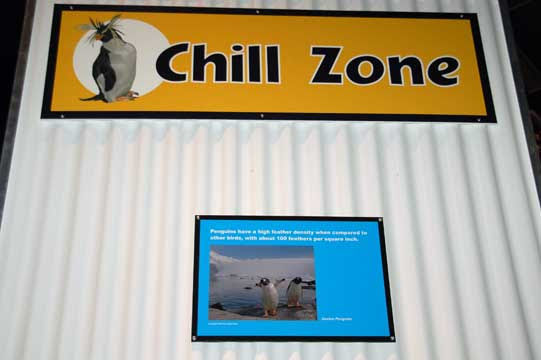 There are also video segments on how other species of penguins live in other parts of the world. 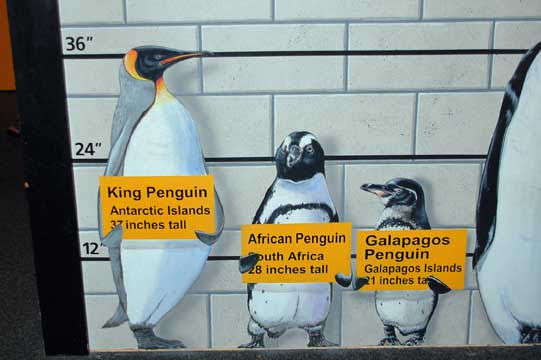 Little kids could measure themselves up against various penguins. 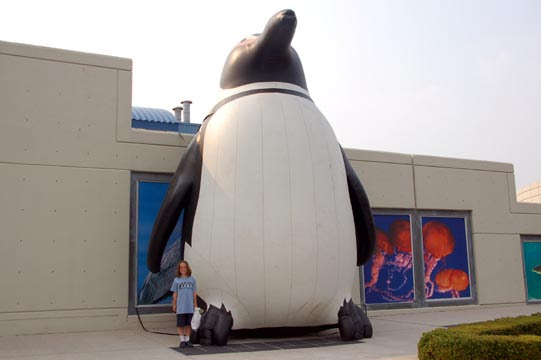 Though no one could beat the giant inflatable penguin outside the aquarium.

Live Free or Die Hard! Do I lose all my PC credentials if I am looking forward to this? Oh, and if you want to follow my every Twitter movement here:
Posted by littlereview at 12:02 AM No comments:

I have had a very lovely day with
Posted by littlereview at 12:03 AM No comments:

So the hot tub I thought was so wonderful on our trip because it had such marvelous hard jets? Is apparently the most likely culprit in older son's rash, even though he was in it for less than five minutes, because the nurse he saw today at the clinic (doctor's office being closed Sundays) was quite certain that what he has is folliculitis and she asked almost immediately whether he had been in a hot tub. The good news is, it's not contagious and is treatable with antibiotics because the infection is bacterial in nature, so at least we don't have to worry about keeping him home or out of the sun for the foreseeable future.

Since our original plan for the day was to spend nearly all of it outdoors at Mount Vernon and an evening concert, we scrapped that idea (Mount Vernon will still be there in the future and Laurie & Peter are playing in Gaithersburg in a couple of weeks) and instead went to see Evan Almighty (my choice was Nancy Drew but the animal-loving testosterone brigade in my family heavily outvoted me). I actually liked it better than I expected -- certainly better than Bruce Almighty, which was a lot more mean-spirited and made the female characters look stupid and shallow. In Evan, the female characters are very much supporting cast in every sense of "supporting," but they all have better chemistry with Steve Carell than Jennifer Aniston did with Jim Carrey, and I think Evan is more appealing than Bruce despite being just as self-absorbed. Plus, as younger son pointed out, there are penguins on the ark. And John Michael Higgins was my camp counselor a million years ago -- I have a photo of me and him when I was fifteen and he was eighteen and extremely good looking -- and he has a pretty big part in the movie and that's good enough for me. 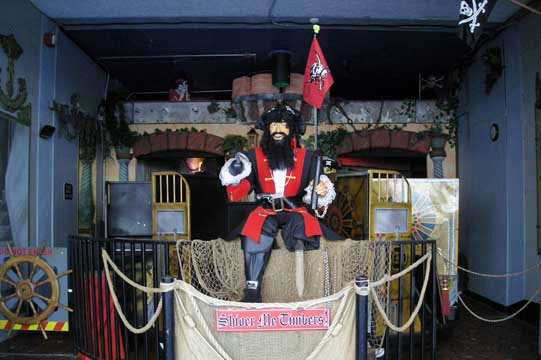 Did I mention that pirate rides, attractions, bars and decor are very popular in Virginia Beach? 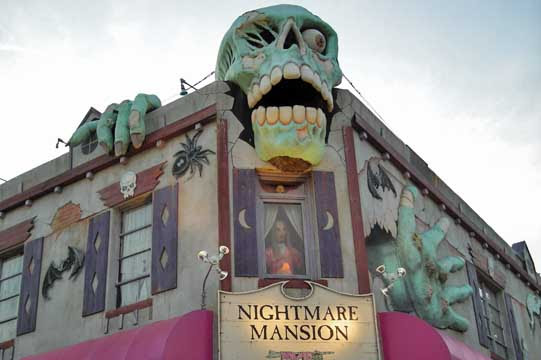 And for some reason, haunted houses are too! 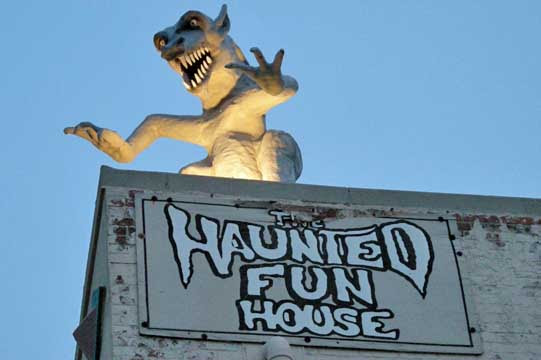 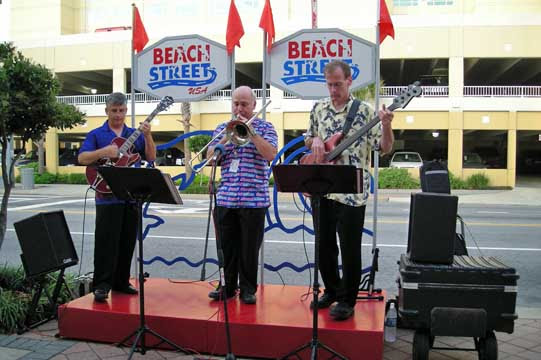 But of course there is also beachside music... 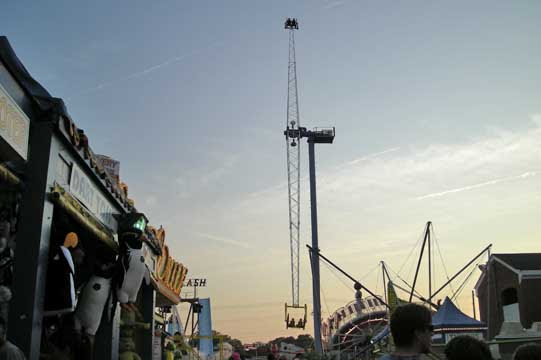 ...and the inevitable arcades, fun houses and amusement rides. 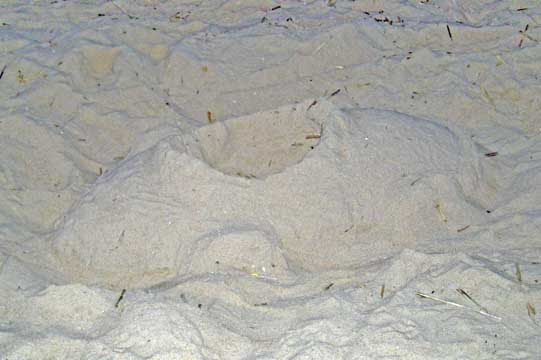 And the beach has other pleasures, like making sand convertibles. 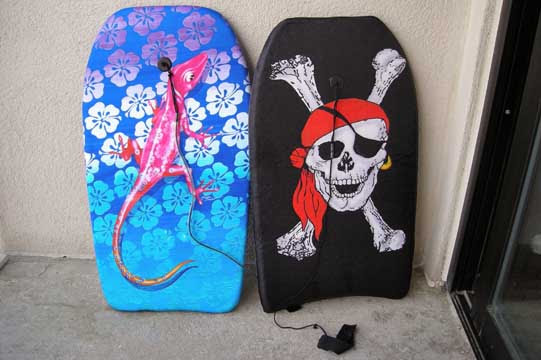 And body boards! Here are mine and

Speaking of pirates, I am going to see them again Monday. My kids and
Posted by littlereview at 12:05 AM No comments:

Older son has a rash over nearly his entire body that seems to have exploded since 10 p.m., so I am distracted from recalling most of the day (from what I can tell, it could be anything from food-related hives to a sun reaction to fifth disease -- he had a bright red face a couple of days ago which we assumed was sunburn even though none of the rest of us were nearly so affected, but he might be having an allergic reaction to the sunblock itself;
Posted by littlereview at 12:30 AM No comments:

Younger son got his retainer this morning, much to his chagrin -- a few weeks with no braces and he was really enjoying having his mouth all to himself. Ultimately he will need braces on the lower teeth, too, poor guy. I dragged older son out with us so I could go buy them both new shoes after the orthodontist...younger son now wears a size bigger than I do in Merrells, which we both love, while older son is rapidly catching up to
Posted by littlereview at 12:06 AM No comments: