Poem for Monday and William Morris at UMCP

A Garden By The Sea
By William Morris

I know a little garden-close,
Set thick with lily and red rose,
Where I would wander if I might
From dewy morn to dewy night,
And have one with me wandering.

And though within it no birds sing,
And though no pillared house is there,
And though the apple-boughs are bare
Of fruit and blossom, would to God
Her feet upon the green grass trod,
And I beheld them as before.

There comes a murmur from the shore,
And in the close two fair streams are,
Drawn from the purple hills afar,
Drawn down unto the restless sea:
Dark hills whose heath-bloom feeds no bee,
Dark shore no ship has ever seen,
Tormented by the billows green
Whose murmur comes unceasingly
Unto the place for which I cry.

For which I cry both day and night,
For which I let slip all delight,
Whereby I grow both deaf and blind,
Careless to win, unskilled to find,
And quick to lose what all men seek.

Yet tottering as I am and weak,
Still have I left a little breath
To seek within the jaws of death
An entrance to that happy place,
To seek the unforgotten face,
Once seen, once kissed, once reft from me
Anigh the murmuring of the sea.

It was visiting weekend at the University of Maryland these past two days, so on Sunday we went to College Park, which was pretty quiet since most of the festivities were scheduled for Saturday to coincide with the football schedule (and with the Ravens, Redskins, Nationals, and Orioles all playing big games on Sunday, I suspect lots of people were glued to their TV sets). We met my in-laws and walked around a bit in my quest to see all of the remaining Fear the Turtle statues on campus, but apart from seeing Daniel, the highlight by far for me was the small but superb exhibit in Hornbake Library, How We Might Live: The Vision of William Morris: 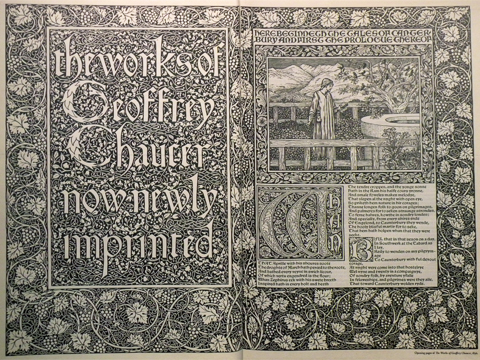 Facsimile pages from the Kelmscott Chaucer, often cited as one of the most beautiful editions ever printed, with 87 illustrations by William Morris's longtime friend Edward Burne-Jones... 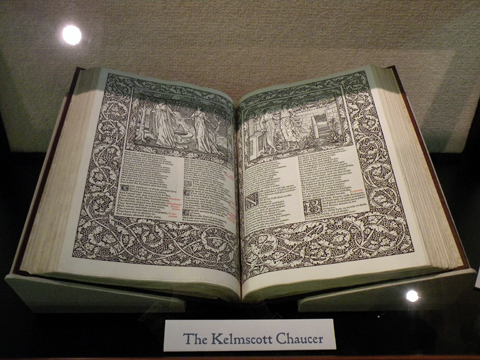 ...and one of the 425 copies of the Kelmscott Chaucer printed by Kelmscott Press with a typeface created by Morris. 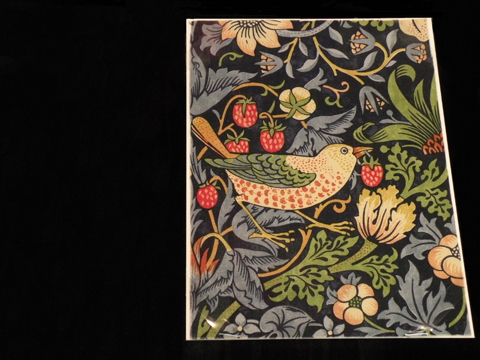 In addition to the poetry, prints, and textiles for which Morris is most often remembered... 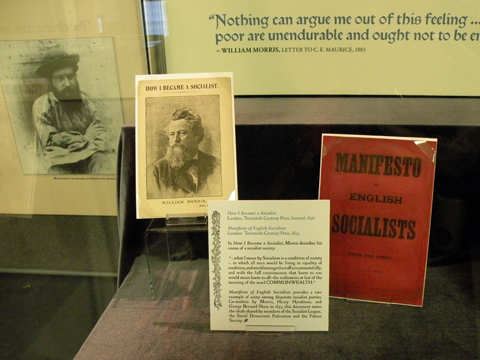 ...Morris was a socialist who was active in politics until the anarchists and Bloomsbury group caused schisms. 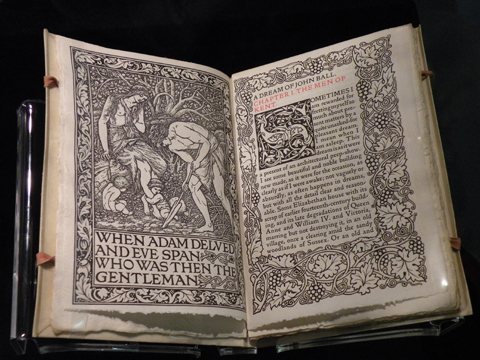 His Dream of John Ball and a King's Lesson is a fictional account of the Peasants' Revolt of 1381. 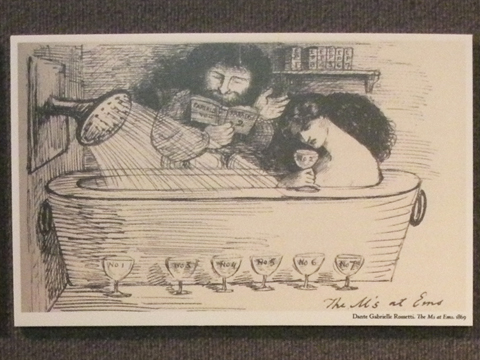 Dante Gabriel Rossetti drew this cartoon of Morris and his wife Jane (also famous as Rossetti's lover, muse, and model). 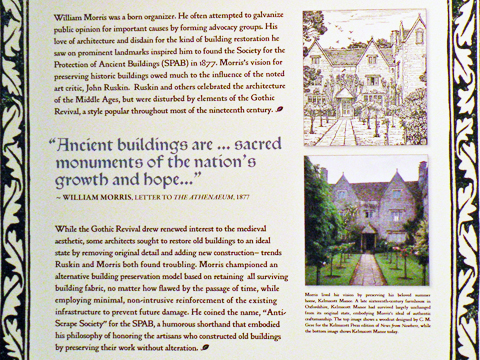 This is their home, Kelmscott Manor, which Morris preserved as nearly in its original 16th century state as possible (the woodcut above the contemporary photograph was designed for Kelmscott Press). 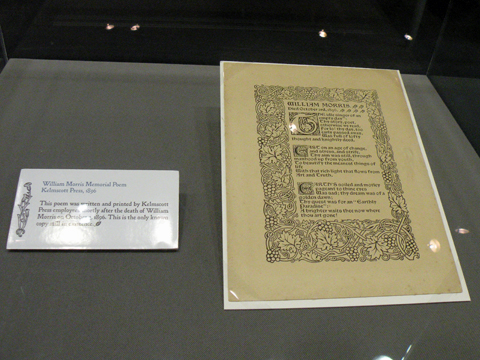 This is the only surviving original copy of a poem published by Kelmscott Press upon the death of William Morris in 1896 reflecting on his belief in an earthly Paradise.

We went to dinner at Noodles & Co., then dropped son off at his dorm and said goodbye to my in-laws. Though we didn't see any of the games, we were happy to learn that the Ravens and Nationals had both won. The Orioles, delayed from rain, are still playing now, though before they resumed play we watched Once Upon a Time, which has lots of potentially interesting stuff going on though I feel like it's kind of slow getting started this season, and the beginning of the second season of Upstairs, Downstairs, which goofs around with history (just as well, since Neville Chamberlain infuriates me) but the characters are less histrionic than Downton Abbey's!
Posted by littlereview at 12:01 AM