Poem for Saturday, Yellow Dubmarine, To the Death

The Paltry Nude Starts on a Spring Voyage
By Wallace Stevens

But not on a shell, she starts,
Archaic, for the sea.
But on the first-found weed
She scuds the glitters,
Noiselessly, like one more wave.

She too is discontent
And would have purple stuff upon her arms,
Tired of the salty harbors,
Eager for the brine and bellowing
Of the high interiors of the sea.

The wind speeds her on,
Blowing upon her hands
And watery back.
She touches the clouds, where she goes,
In the circle of her traverse of the sea.

Yet this is meagre play
In the scrurry and water-shine,
As her heels foam--
Not as when the goldener nude
Of a later day

Will go, like the centre of sea-green pomp,
In an intenser calm,
Scullion of fate,
Across the spick torrent, ceaselessly,
Upon her irretrievable way.

It was a very hot Friday but I got a lot done! In the morning I worked on a review of Deep Space Nine's "To the Death" (neither one of my favorites nor a great episode) while Adam (who got 5s on his world history and statistics AP exams and a 4 on English language -- he'll take literature next year) played tennis with my father and went out to lunch with him. Later I took a walk, took a shower, and we took Adam to a party at his girlfriend's while Daniel went to have dinner with my parents.

Then we picked up Angela and Kevin and we went to Rockville for dinner at Tara Asia and to see Yellow Dubmarine, a local Beatles reggae tribute band who were playing three sets at Rockville Town Square. After the second set we came back to our house and watched Love Never Dies, since neither of them had seen it and wanted to, though we all agree it's no Phantom of the Opera. Here are a couple of pics of me, Paul and Angela at the concert: 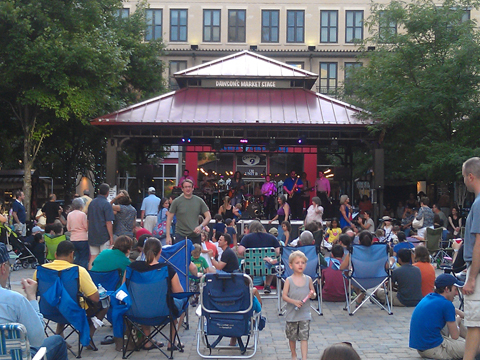 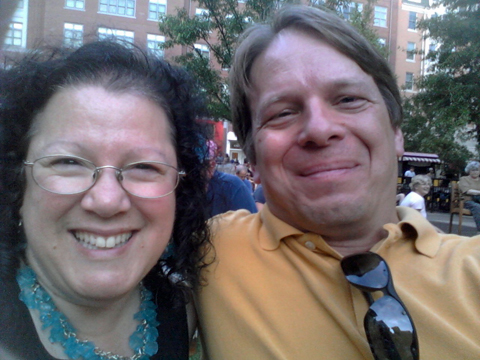 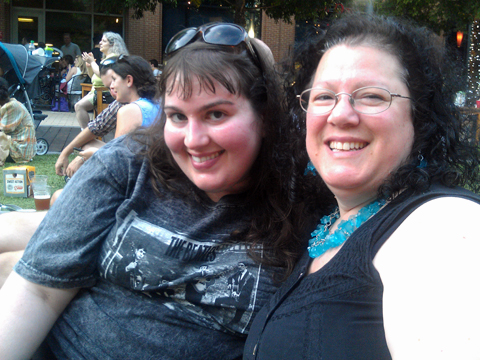