Poem for Saturday and Kayaking Crab

so now you come back as both substance
and shadow. You aren't even a woman now,
the soul beyond female and male, or something
comprising the two. But I'm bound
by human image. I look into the sea
and only find myself, the same me, limited to flourish and sweep.
I want to see you again, the woman-you,
the one I spoke to here in letters, and you held on to them
for your husband to return afterward, their messages
turned back on their owner with the indifference of mirrors.

You who wouldn't speak of dying,
what am I to think—that love was enough?
The understood as plain
as this ocean stretching before me, or the mote I ignore
floating in front of everything I see?
The sacred is one step away from the profane,
you said that once, as if I'd asked the question.
There's no answer out there in the miles of choppy water,
not one white wave to follow in. But the eye
is never what it seems, its matter separate
and distinct, the cornea a transparent rigid shell,
while the body languishes in its ropy
strands of tissue, entirely perishable.

Running late, was working on a photo book and working on plans for various weekend and later-in-the-summer trips. I had a nice day: lunch with Karen and Angela at Lebanese Taverna, a bit of shopping at the Container Store since I was over there, figuring out how the new Pokemon Go gyms work (at one point I had four Pokemon in gyms, a record for me, which made me happy and probably means the hardcore players are all annoyed that middling people like me can actually enjoy themselves).

We had dinner with my parents and watched the beginning of the Nationals game, which turned out to be a good enough game after starting badly that we watched all the way to the end when the Nats won in the tenth (as opposed to the Orioles who lost by ten runs without having to go into extra innings, ha). Since I'm running late, going to PA tomorrow to see Paul's family, and since Adam went kayaking in Greece, here is a photo from last summer kayaking in Delaware's Assawoman Bay of a crab swimming by my paddle: 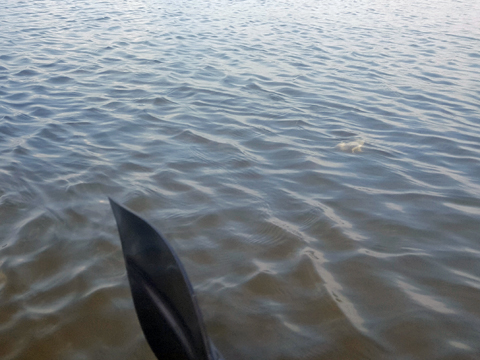 Posted by littlereview at 12:50 AM