Quiet day. My lunch date cancelled out, which was fine as I was working very slowly, trying to iron out Bar Mitzvah stuff and figuring out what in StarTrek.com's coverage of Comic-Con we had not already posted at TrekToday and reading about lakefront property on a Saturn moon discovered in satellite photos of Titan (and given that the temperature the rest of this week in the DC area is supposed to be over 100, it doesn't even sound all that unpleasantly cold, heh). The kids had camp but after soccer early in the morning, they were not allowed to go outside after lunch due to the county heat warning. Younger son played basketball, but older son played chess most of the afternoon and was then restless when he got home. He has been ordered to play basketball or some other indoor sport tomorrow!

It's funny how things work. In the evening The Patriot was on -- a movie I have scrupulously avoided for years because of Mel Gibson, even though it has several other actors I like very much in major roles, including Jason Isaacs, Heath Ledger, Joely Richardson, Chris Cooper, Rene Auberjonois, and Adam Baldwin whom I would not have noticed had it not been for Serenity a few days ago but who's really fun playing sort of the opposite of Jayne. As you can guess, I watched it...I figure now that Gibson is self-destructing so spectacularly in public, I don't have to boycott him as thoroughly (will go back to it if people actually buy this "Boo hoo, I'm sorry, I didn't mean it" crap he's spouting -- which didn't he mean, the drinking or the blaming Jews for everything in the history of the world?) I really liked it, too, particularly the excesses which made it so easy not to take it seriously when I didn't want to think of it as a good or important movie, just an entertaining one. Isaacs is amazing -- there's a teeny bit of Sharpe in him when he's telling off Cornwallis, the fat rich British guy who thinks Tavington isn't good enough in any way, but he's also utterly selfish and brutal, and it's kind of refreshing when we have to listen to Mel go on about how he used to be just as selfish and brutal but now, because he's doing it for his family, it's okay to kill other people. 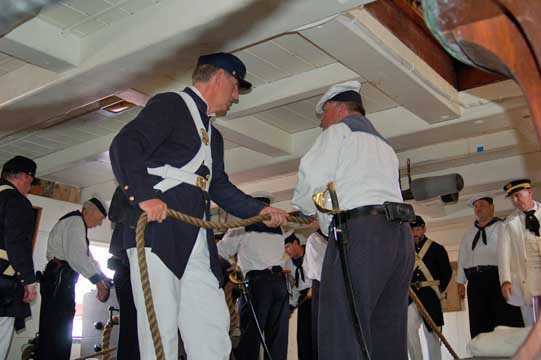 Reenactors at a firing demonstration aboard the USS Constellation... 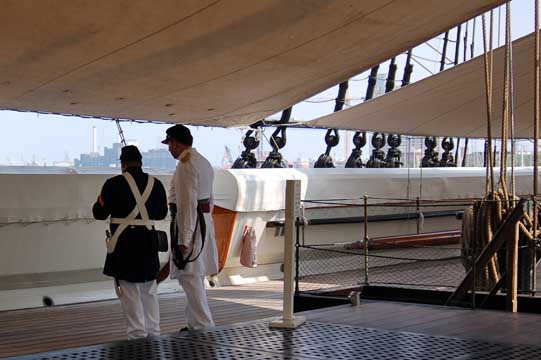 ...and on deck in their uniforms, sweltering in the heat. The restored wardroom, directly below the captain's cabin... 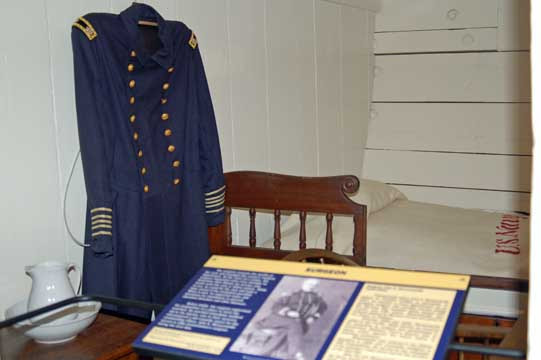 ...with the officers' cabins restored as well. This one belonged to the ship's surgeon. 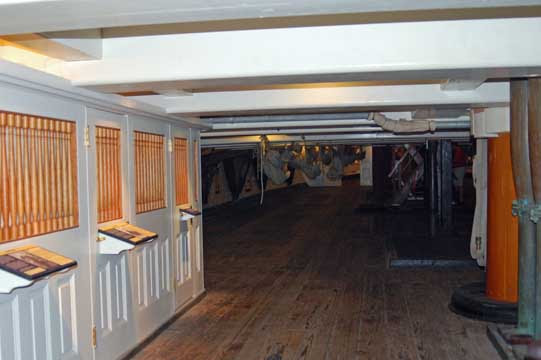 From here you can see some of the hammocks where those not lucky enough to have one of these cabins slept. 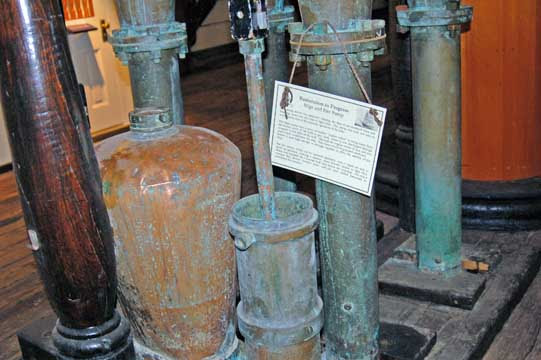 And still in need of restoration that is underway now, the bilge and fire pump.

Have a very happy Lughnasadh/Lammas -- I am not celebrating properly till this weekend with my pagan group!
Posted by littlereview at 12:34 AM