MY E-MAIL IS STILL DOWN. Hostway says it's back, but I have only received two pieces of e-mail in the past 24 hours, and I know I received nearly 40 LJ comments in that time that haven't arrived yet, so I can only imagine how many e-mails have not been delivered. If I owe you a tag or a comment to your comment or anything, I apologize. Please if you want to get ahold of me for anything, write to me at my user name here @ gmail!

It was mostly a quiet Friday, since we're doing lots of stuff this weekend and I've had to take headache medicine every day this week, including Excedrin with a chaser of Imitrex last night. My father took the kids swimming in the afternoon, and our original plan was to eat dinner early and then go see a free production of The Two Gentlemen of Verona in Laurel outdoors on the grounds of the Montpelier Mansion, but it was still 90 degrees at 6:30, the traffic reports weren't promising, the kids don't know the play at all -- they are far more attentive when they're somewhat familiar with the source material, like Midsummer Night's Dream or Much Ado or Macbeth which we are going to see at Blackfriars in a few weeks -- so instead we went to Toys R Us and another store to look for stuff younger son might want with his birthday money (and POTC action figures I might want but refrained from buying...well, okay, not completely, I did order an Elizabeth in boy's clothes off eBay because I just cannot resist). 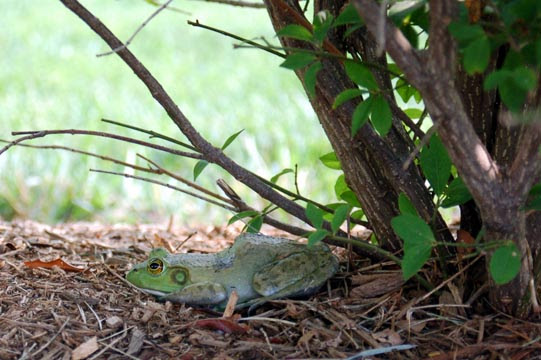 Frog hiding from the heat under a bush.