Last laundry isn't folded yet but most of the other chores are done. Kids played with older son's friend Omar, who is leaving for England and then Bangladesh for a month in the morning; I tried to keep my head up, as whatever is going on with my lymph nodes hasn't gone down and I'm tired and stiff and sore and really hoping this is all stress and I'm not coming down with anything. Had dinner with parents, finalized lists of who's bringing what. Half-watched Animal Planet to which the kids got addicted while traveling; this time it was the San Francisco animal patrol and Meerkat Manor. 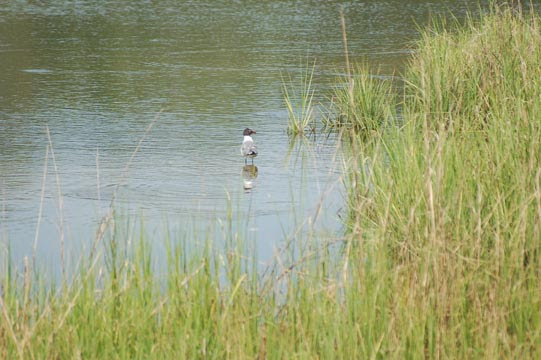 Something I hope to see lots of in coming days...a laughing gull hanging out in the water.

Saturday on the way east we are stopping at the Chesapeake Bay Maritime Museum in St. Michaels to see the replica of John Smith's shallop. Then it's on to Bethany!
Posted by littlereview at 12:12 AM