Poem for Friday and Stargazing Farm

in my body, 4 a.m. in my body, breading and olives and
cherries. Wait, it's all rotten. How am I ever. Oh notebook.
A clown explains the war. What start or color or kind of
grace. I have to teach. I have to run, eat less junk. Oh CNN.
What start or color. There's a fist of meat in my solar plexus
and green light in my mouth and little chips of dream flake
off my skin. Try saying wren. Try saying
mercy.

I started Thursday morning by trying to post yesterday's blog entry to LiveJournal, without success. This made me grumpy, so I got off the computer and made a couple of pairs of earrings out of beads and charms I already had. After lunch, Adam again went to the track with friends and Daniel again went to driver's ed. The University of Maryland finally got Daniel's AP scores, so now he has 30 college credits -- nearly a full year -- including so many history credits that he's dropping the history class for which he originally signed up, meaning he's taking five classes instead of six, which I think is all to the good. He may minor in history but he has plenty of time for those classes later.

I had dinner at the mall with Gblvr, where we both had Indian food and did a bit of shopping -- I found a skirt on Old Navy's clearance rack for $1.49, a charm necklace at Laila Rowe for $5, and glittery purple flats at Forever 21 for $9 (these are a necessity to go with my sparkly purple bat peplum skirt). Bath & Body Works already has Halloween merchandise on display! When I got home, we watched the animated Trek episode for the week, then the Orioles losing to the Blue Jays (the Nationals had already lost to the Marlins), then Futurama, which was utterly hilarious -- it involved time travel, the fathers of our country, and Benjamin Franklin doing awesome things with lightning.

As promised, Star Gazing Farm photos, assuming they will load by the time you see them: 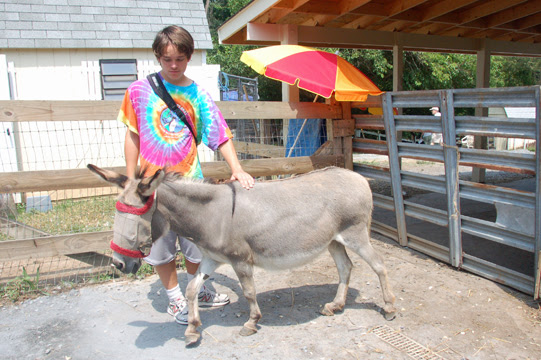