Roads Go Ever On And On
By J.R.R. Tolkien

Roads go ever ever on,
Over rock and under tree,
By caves where never sun has shone,
By streams that never find the sea;
Over snow by winter sown,
And through the merry flowers of June,
Over grass and over stone,
And under mountains in the moon.
Roads go ever ever on
Under cloud and under star,
Yet feet that wandering have gone
Turn at last to home afar.
Eyes that fire and sword have seen
And horror in the halls of stone
Look at last on meadows green
And trees and hills they long have known.

I got up early on Tuesday morning to take Daniel to get his wisdom teeth extracted. Only one of them was badly impacted, but both his dentists agreed that they should all come out, and the oral surgeon said he would probably be more comfortable with general anesthesia since that one tooth was going to have to be drilled apart. We were in the office for nearly two hours, though the extraction itself was quicker than I'd thought it might be and Daniel has had relatively few complaints -- more annoyance with having to wear ice packs and eat yogurt than pain or swelling, knock wood. We were home before 11 a.m., when my father arrived to take Adam out for lunch and miniature golf.

It was a pretty quiet remainder of the day around here changing gauze and reading, with Daniel busy setting up his new computer, so I guess it was a good day for him to be stuck in the house relatively immobile. Other than making the mistake of watching the Casey Anthony verdict and reading some of the insane things people were saying about the jurors, I had a pretty low-key afternoon. I finished up some stuff that I worked on while Daniel was having his teeth pulled, we watched some more Gargoyles, the cats paced around and whined for food since they were sure they'd been deprived of a meal. Paul made zucchini "crab cakes" for dinner and we watched some National Geographic specials about animals in Yellowstone and Death Valley. 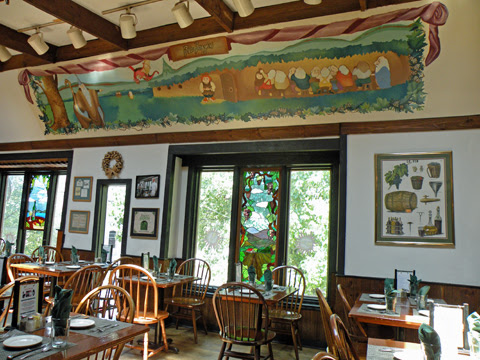 This is the mural upstairs at Bilbo Baggins restaurant in Alexandria, Virginia -- I posted a photo of it in 2005 but I guess I am entitled to another. We had lunch downstairs in the Green Dragon Pub for our anniversary last weekend. The food and decor both are a lovely mix of rustic European and contemporary American; we ate French onion soup with Creole cilantro fries. Sadly, we were too full for the Lord of the Rings.
Posted by littlereview at 12:41 AM