Poem for Tuesday and Fort McHenry

A Supermarket in California
By Allen Ginsberg

What thoughts I have of you tonight, Walt Whitman, for I walked
down the sidestreets under the trees with a headache self-conscious looking
at the full moon.
In my hungry fatigue, and shopping for images, I went into the neon
fruit supermarket, dreaming of your enumerations!
What peaches and what penumbras! Whole families shopping at
night! Aisles full of husbands! Wives in the avocados, babies in the tomatoes!
--and you, García Lorca, what were you doing down by the watermelons?

I saw you, Walt Whitman, childless, lonely old grubber, poking
among the meats in the refrigerator and eyeing the grocery boys.
I heard you asking questions of each: Who killed the pork chops?
What price bananas? Are you my Angel?
I wandered in and out of the brilliant stacks of cans following you,
and followed in my imagination by the store detective.
We strode down the open corridors together in our solitary fancy
tasting artichokes, possessing every frozen delicacy, and never passing the
cashier.

Where are we going, Walt Whitman? The doors close in a hour.
Which way does your beard point tonight?
(I touch your book and dream of our odyssey in the supermarket and
feel absurd.)
Will we walk all night through solitary streets? The trees add shade
to shade, lights out in the houses, we'll both be lonely.
Will we stroll dreaming of the lost America of love past blue automo-
biles in driveways, home to our silent cottage?
Ah, dear father, graybeard, lonely old courage-teacher, what America
did you have when Charon quit poling his ferry and you got out on a
smoking bank and stood watching the boat disappear on the black waters of
Lethe?

We decided to spend Independence Day at Fort McHenry, where the original Star Spangled Banner was flying when Francis Scott Key watched the bombardment and wrote down the lyrics that became our national anthem. I'd never been there before and was expecting a smaller fort, something more barren like Fort Sumter. The fort itself is actually quite large and spacious, with its barracks and storage buildings restored with exhibits about both the War of 1812 and the Civil War -- the cannons aimed at the Patapsco River date from that conflict, then the fort served as a hospital and training station during the World Wars. Because July 4th was an important holiday in early America, the fort had reenactors firing cannons, playing music, teaching historic games, and reading the Declaration of Independence aloud to a crowd that cheered the statements of rights and booed the King's misdeeds. 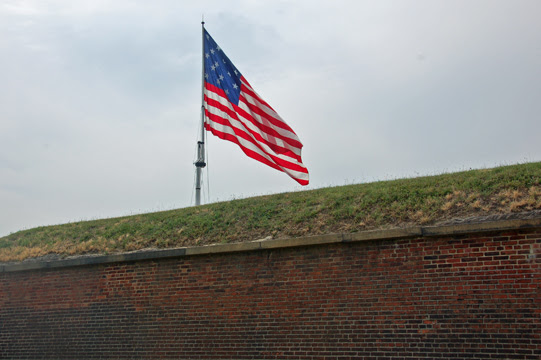 Outside the fort, costumed soldiers read the Declaration of Independence aloud, asking visitors to participate by reading lines. 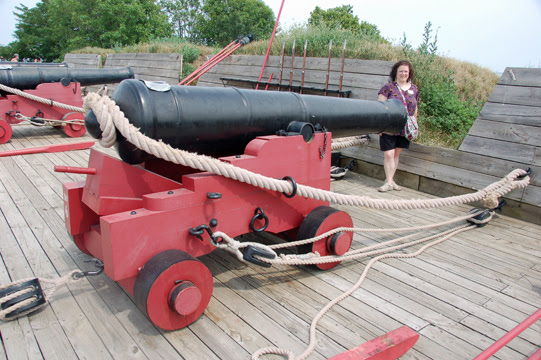 Here I am by one of the cannons facing the Patapso River... 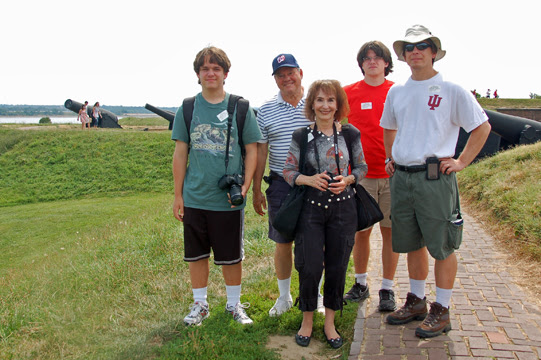 ...and here is my family on the upper wall by the Civil War guns. 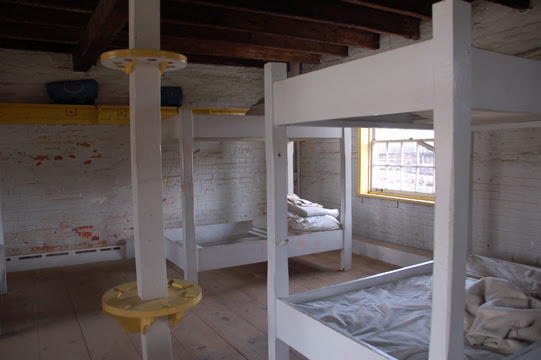 Some of the barracks remain inside the fort... ...in buildings that also house exhibits on the War of 1812 and Francis Scott Key. Guests in the national park visitor's center look out at the flag after seeing a short movie about the Star Spangled Banner. 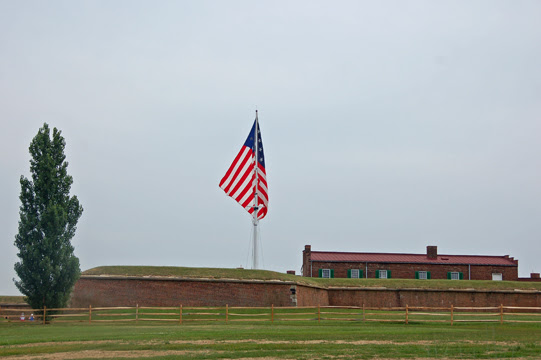 This is the view of the fort from the park entrance.

We had gone to the fort with my parents and we went out to dinner with them at California Pizza Kitchen late in the afternoon (we were all hungry after being in the sun all afternoon and the restaurant closed at 6 for the holiday). Then we came home and watched A Capitol Fourth, mostly because we wanted to see Steve Martin and the Steep Canyon Rangers playing banjo (I liked Josh Groban's version of Paul Simon's "America" and thought Kelli O'Hara and Matthew Morrison did "Tonight" sweetly if blandly, but my adored Jimmy Smits has had much too much Botox, he can't even move his eyebrows). The DC fireworks show is long and lovely and better in person, but it can take two hours to get home from it and Daniel is having his wisdom teeth out bright and early Tuesday morning so it was not an option.
Posted by littlereview at 12:08 AM