Out of the night that covers me,
Black as the Pit from pole to pole,
I thank whatever gods may be
For my unconquerable soul.

In the fell clutch of circumstance
I have not winced nor cried aloud.
Under the bludgeonings of chance
My head is bloody, but unbowed.

Beyond this place of wrath and tears
Looms but the Horror of the shade,
And yet the menace of the years
Finds, and shall find, me unafraid.

It matters not how strait the gate,
How charged with punishments the scroll.
I am the master of my fate:
I am the captain of my soul.

We watched Invictus, having realized that it was the last night it was free on On Demand, and now I have no idea why it took us so long -- I often loathe the treatment of women in Clint Eastwood movies (they're pretty marginal in this one) and I'd heard that Matt Damon wasn't the greatest, but I'm a total sucker for sports movies, I know too little about rugby to have any idea how well they recreated the big matches, and I thought that, apart from his accent being a bit inconsistent, Damon was quite good (Freeman was, of course, extraordinary, though I don't think I've ever seen him be less than good even in bad movies).

Otherwise, it was a quiet day; my father played tennis with Adam in the morning, then took both kids out to lunch before Daniel had driver's ed and Adam did his health homework. I finished and folded the laundry, worked on some article stuff, and saw both a fawn and a bunny in the woods. The Orioles beat Toronto by 8, the Nationals lost to Florida by 9, I have nothing useful to contribute to the national debt debate hysteria, and Juan Williams was just very impressive on The Daily Show. Here are the National Arboretum bonsai from a couple of weekends ago, the final two from an exhibit on how a bonsai is created: 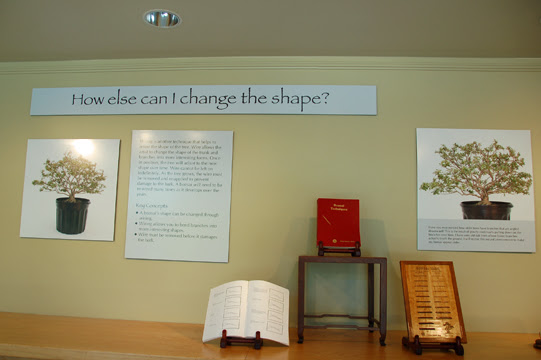