Younger son was feeling somewhat better this morning, so after he went to Hebrew school we all went down to the National Arboretum, where the azaleas have just begun to peak. They were magnificent -- even more spectacular than Garrett Park's, in shades of peach and violet and fuschia-and-white-striped that we don't see in the neighborhoods around here. The big bumblebees seem to prefer the pink ones, particularly in the sun; those bushes were buzzing! There were many people on the azalea walk and many more around the National Capitol Columns and the koi pond outside the visitor center, but because the arboretum is so big, it never feels crowded.

We had hoped to stop at Shakespeare's birthday celebration at the Folger Library -- our kids are too old for the face painting and stuff, but there are usually high school performances and sword demonstrations and they have birthday cake for everyone -- but younger son was looking droopy, so since he had a violin recital in the evening, we came home for some down time. After dinner we went to St. Jane de Chantal church for a brief rehearsal and then the concert, which was five Vivaldi pieces: Concerto in D, which younger son was playing in a group; then a mandolin concerto adapted for strings and organ; a double violin concerto in A minor; "Winter" from The Four Seasons in its entirety with three different soloists; and the first movement of "Spring" in honor of the current season. 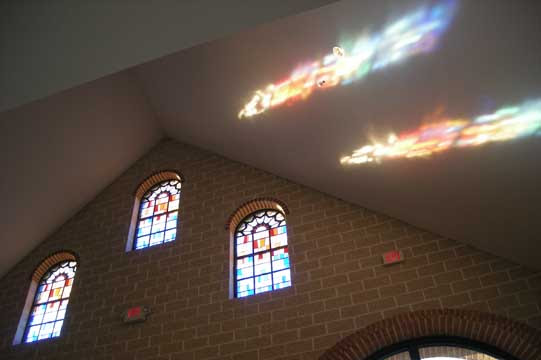 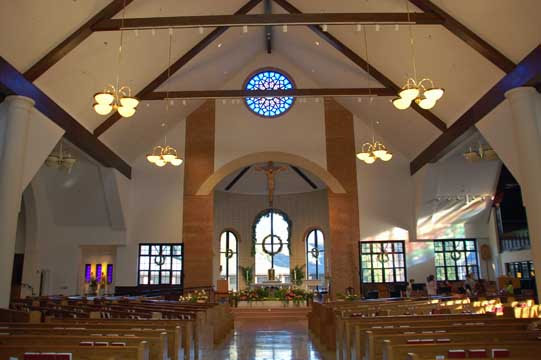 Though the church has been in Bethesda for decades, this new church building is only six years old. 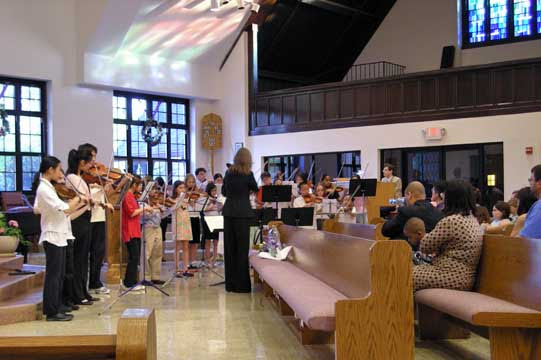 Here for instance is how the light looked during the violin recital. 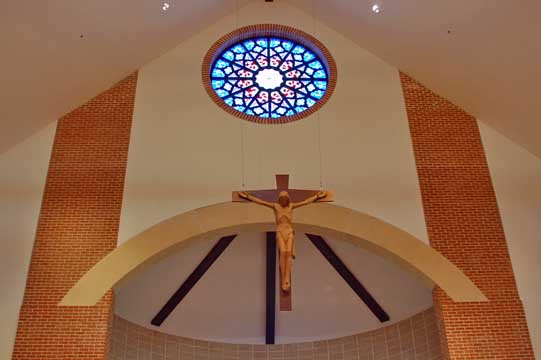 The rose window is small but colorful. 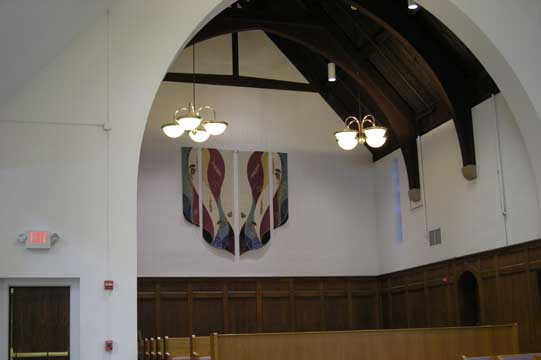 The church has very pretty artwork as well... ...and carved wood Stations of the Cross all around the central seating area. 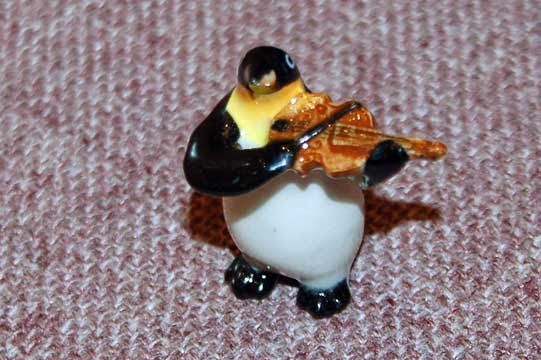 This is the little glass penguin playing the violin I got son in lieu of flowers. And because I saw so many gorgeous flowers today, here are the flowers from the entrance of the church (with the baptismal font, if that's what it's called in Catholic churches, visible through the glass).

My new camera worked wonderfully both indoors without flash in the church and outdoors in close-up mode with the flowers! I owe azalea photos...shall post both arboretum and domestic ones during the week. Am slowly catching up on The Tudors while folding laundry...it's beautifully filmed and well-acted, but I keep seeing Jonathan Rhys-Meyers and not Henry VIII no matter how hard I try. I'm enjoying it, but considering that I thought HBO's Elizabeth I was a bit soap-opera-ish when I watched it, this puts that to shame in that regard! *g*
Posted by littlereview at 12:04 AM