Poem for Saturday and Family Stuff

Pangur Bán and I at work,
Adepts, equals, cat and clerk:
His whole instinct is to hunt,
Mine to free the meaning pent.

More than loud acclaim, I love
Books, silence, thought, my alcove.
Happy for me, Pangur Bán
Child-plays round some mouse’s den.

Truth to tell, just being here,
Housed alone, housed together,
Adds up to its own reward:
Concentration, stealthy art.

Next thing an unwary mouse
Bares his flank: Pangur pounces.
Next thing lines that held and held
Meaning back begin to yield.

All the while, his round bright eye
Fixes on the wall, while I
Focus my less piercing gaze
On the challenge of the page.

With his unsheathed, perfect nails
Pangur springs, exults and kills.
When the longed-for, difficult
Answers come, I too exult.

So it goes. To each his own.
No vying. No vexation.
Taking pleasure, taking pains,
Kindred spirits, veterans.

Day and night, soft purr, soft pad,
Pangur Bán has learned his trade.
Day and night, my own hard work
Solves the cruxes, makes a mark.

Adam and I had lunch with Alice and her son at the Silver Diner, then hung out at home for a while before Paul arrived and we went to have dinner with my parents. Then we watched Bad Times at the El Royale, which has a bunch of actors I like but otherwise is way too violent neo-noir for my taste, and this week's Graham Norton, which has Olivia Colman and Keira Knightley and really what more does it need. Now I'm working on my Kindle library and it's late so here are some domestic scenes: 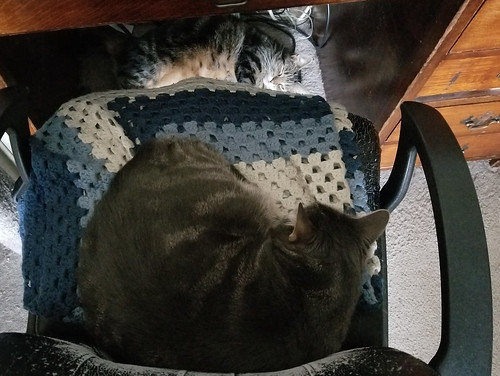 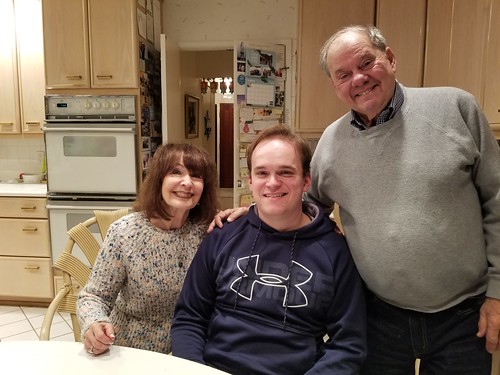 Posted by littlereview at 1:36 AM