If seasons all were summers,
And leaves would never fall,
And hopping casement-comers
Were foodless not at all,
And fragile folk might be here
That white winds bid depart;
Then one I used to see here
Would warm my wasted heart!

One frail, who, bravely tilling
Long hours in gripping gusts,
Was mastered by their chilling,
And now his ploughshare rusts.
So savage winter catches
The breath of limber things,
And what I love he snatches,
And what I love not, brings.

We had snow all day -- barely half an inch accumulation, but it was so cold that it all stuck, making the roads slippery -- and lost our power from a bit before 6 p.m. to a bit after 9 p.m., so I had a chaotic evening and this will be a rush post. Not that I have a lot to report: I had lunch plans with both Hufflepants and Gblvr, both of whom wisely decided not to fight the traffic and deal with the unplowed local streets, so I stayed in and read and ate leftover peanut soup, Paul got sent home from work early and the kids' schools canceled afternoon activities, so Daniel had no robotics and Adam was furious not to have been dismissed after lunch as it was first reported that they might be. I had intended to exercise and shower and stuff late in the afternoon but the flickering power even that early made me nervous about potentially being down the basement or in the bathroom in complete darkness, which turned out to be wise.

My parents rescued us -- fed us dinner, let the kids use their internet so homework could be completed (our county still hasn't made any announcements about whether schools will open on time tomorrow, though our neighborhood is so icy now and it's supposed to stay in the teens tonight so I'm not sure how they can even consider it). We came home a little before ten to rescue our poor cold hungry cats, who of course went and sat on the vents as soon as the heat came back on. I even managed to get into Superpoke Pets to get the rare items and switch my pet to the new format. So it would have been a good evening despite the power issues if I hadn't arrived to the news that Yahoo is shutting Delicious -- augh! Someone tell me about other bookmarking sites (I have Google's but I don't like their organization/notes nearly as much). The South Mountain Heritage Society is housed in a historic church in Burkittsville, ostensible home of the Blair Witch. We visited it on the Frederick Museums by Candlelight tour, when we also stopped at the Brunswick Railroad Museum, whose model train railway reflects the tracks, roads, and fairgrounds of a previous era in Maryland. The Dahlgren Chapel is no longer an active Catholic church but it was open as well for visitors, who were allowed to climb to the balcony and bell tower and ring the bell. We stopped at South Mountain Creamery to see the calves and get eggnog, but we also got to visit with the chickens and turkeys, whom I gather lay eggs all year. These are the sheep at Kiparoo Farm... ...who provide the wool that gets spun into the yarn for which the farm is beloved among knitters. 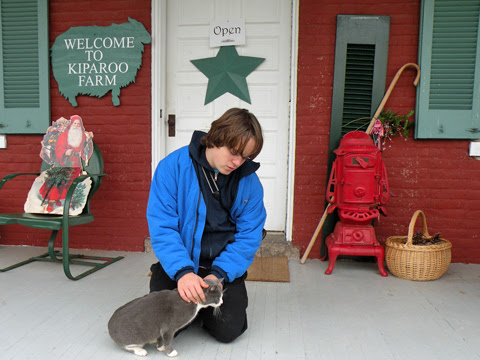 Younger son found cats to bond with at Kiparoo and South Mountain Creamery. This cat, however, was unhappy about the presence of an interloper tomcat and tried to hide.
Posted by littlereview at 12:28 AM