I
Is the total black, being spoken
From the earth's inside.
There are many kinds of open.
How a diamond comes into a knot of flame
How a sound comes into a word, coloured
By who pays what for speaking.

Some words are open
Like a diamond on glass windows
Singing out within the crash of passing sun
Then there are words like stapled wagers
In a perforated book—buy and sign and tear apart—
And come whatever wills all chances
The stub remains
An ill-pulled tooth with a ragged edge.
Some words live in my throat
Breeding like adders. Others know sun
Seeking like gypsies over my tongue
To explode through my lips
Like young sparrows bursting from shell.
Some words
Bedevil me.

Love is a word another kind of open—
As a diamond comes into a knot of flame
I am black because I come from the earth's inside
Take my word for jewel in your open light.

Happy Kwanzaa! We had a fairly low-key day because of the weather forecast, which dropped from potentially ten inches of snow to five inches of snow to three inches of snow to less than two inches of snow...ultimately we ended up with less by nightfall than we got a couple of weeks ago, though considering what fell both south and north of us, we got lucky. When it was obvious by lunchtime that we were in no danger of a blizzard, we decided to go see The Voyage of the Dawn Treader in 3D, since the rest of the family hadn't seen the film at all and I'd only seen the standard print. This is definitely my favorite of the Chronicles of Narnia thus far -- I can't resist sea voyages or dragons, and I really think the young actors playing Edmund and Lucy are stronger in those roles than Peter and Susan ever were, even though Aslan is more explicitly Jesus in this installment. Younger son, who never read the book, had many criticisms of the story, but I think it holds together a lot better than Prince Caspian.

Our lucky unwatched football streak continued, as the Redskins beat the Jaguars and the Ravens beat Cleveland -- the latter clinching a playoff berth, woohoo! -- while we were ignoring their games at the movies. My parents invited us over for dinner, a combination of leftovers and other things since so many of us have different dietary demands, plus I ate way too many chocolate covered pretzels...at least I'd managed to exercise earlier, and we watched part of the comedy of the Packers slaying the Giants. In the evening, older son was finishing up college essays and younger son was working on photos, so we watched the second Night at the Museum movie since they'd seen it before -- the one with Amelia Earhart, who is the saving grace for the sillier parts. It's supposed to be very, very cold tomorrow, though without additional snow, so I'm still not sure what we'll be doing on Monday other than the kids have requested no museums. Here are the last photos I'll ever post from Boyds Bear Country, which is closing early in the new year: For many years the shop was filled on four levels from floor to ceiling with "bears and hares you can trust," plus hundreds of other animals. In our family, the various penguin displays have always been most popular... ...but a great many creatures (including some imaginary ones) have always been available for purchase. In addition to stuffed animals, there were resin, porcelain, and wooden critters, plus these locally decorated gourds. Decorations were changed seasonally on the main level of the shop. 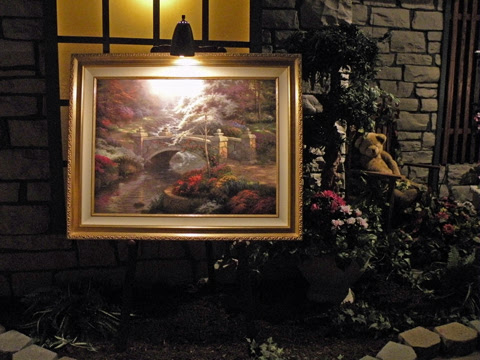 In recent years, other collectibles were given their own galleries, including Jim Shore sculptures, Yankee Candles, and Thomas Kinkade paintings and prints. The slopes of Ski Roundtop are visible from the parking lot.

Belated Fannish5: Name five fictional families that you would like to spend time with.
I couldn't decide between the Weasleys and the Malfoys -- it depends on whether Harry took Snape out for the holidays or vice versa -- so I left out Harry Potter entirely.
1. The Murry-O'Keefes, A Wrinkle In Time etc.
2. Viviane, Igraine, Morgause, The Mists of Avalon
3. Sarah Jane and Luke Smith, Doctor Who/The Sarah Jane Adventures
4. The Kents, Smallville
5. The Bluths, Arrested Development
Posted by littlereview at 12:05 AM