The Garden Year
By Sara Coleridge

January brings the snow,
Makes our feet and fingers glow.

April brings the primrose sweet,
Scatters daisies at our feet.

May brings flocks of pretty lambs
Skipping by their fleecy dams.

August brings the sheaves of corn,
Then the harvest home is borne.

Warm September brings the fruit;
Sportsmen then begin to shoot.

Fresh October brings the pheasant;
Then to gather nuts is pleasant.

Dull November brings the blast;
Then the leaves are whirling fast.

I spent a fabulous day at Winterthur with my family and Dementordelta enjoying the Yuletide decorations and the grounds in the snow. We went up in the morning, driving past fields of geese hunting for food, and had an indoor picnic in the cafe before our tour of the house, which currently has both themed Christmas trees and some of the decorations from the wedding of Henry Francis du Pont's elder daughter Pauline on display amidst the decorative arts and architecture. We also visited the museum galleries, which have a big exhibit on Betsy Ross -- her background as a seamstress, her three marriages, the likelihood that she actually knew George Washington, her Revolutionary and abolitionist leanings. It was chilly but not too cold to walk a bit in the gardens afterward; currently the only azaleas blooming at Winterthur are on one of the Christmas trees, rather than the path through the woods, but the grounds were paved enough to walk past the stone circle and wooden huts in the children's garden, and we got to see a beautiful sunset and sheep grazing in the snowy fields.

We stopped for dinner at a Subway in Delaware, then drove down I-95 to the Mormon Temple in Kensington, which has a free holiday lights show every winter with hundreds of light-covered trees, plus a life-sized Nativity scene in the gardens and indoor displays of mangers and Christmas trees adorned with dolls from around the world. Then we came home, had ice cream sundaes, said goodnight to Dementordelta who had to drive home, and watched the Kennedy Center Honors show, which had many lovely moments -- of course I loved all the Paul McCartney song performances and I even enjoyed hearing how Oprah became the most powerful woman in media, but my favorite part was seeing 90-year-old Carol Channing on stage singing with the not-much-younger Angela Lansbury and Chita Rivera during the Jerry Herman tribute. Between the La Cage Aux Folles songs and Bill T. Jones' choreography, it was also a very gay-celebratory show. And the Vikings beat the Eagles, which delights me. Christmas trees decorate many of the rooms at Winterthur in December. The dining room is set for the holidays... ...and many of the living rooms, like the Port Royal Parlor, have examples of the flowers and food the du Ponts would have enjoyed. 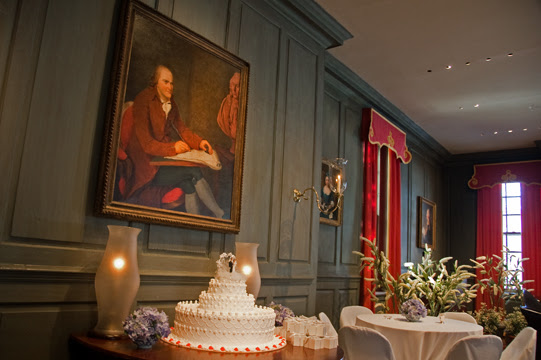 The Marlboro Room and Montmorenci Stair are decorated as they appeared for one of du Pont's daughter's wedding... ...as is the conservatory, which overlooks the snowy gardens. This tree is decorated with dried flowers which were grown at Winterthur in warmer weather. Here is the stone circle in the snowy woods. The Mormon Temple at right overlooks the LDS visitor center and some of the colorfully lit trees surrounding it.
Posted by littlereview at 12:10 AM