The Lights at Carney's Point
By Alice Moore Dunbar-Nelson

O white little lights at Carney's Point,
You shine so clear o'er the Delaware;
When the moon rides high in the silver sky,
Then you gleam, white gems on the Delaware.
Diamond circlet on a full white throat,
You laugh your rays on a questioning boat;
Is it peace you dream in your flashing gleam,
O'er the quiet flow of the Delaware?

And the lights grew dim at the water's brim,
For the smoke of the mills shredded slow between;
And the smoke was red, as is new bloodshed,
And the lights went lurid 'neath the livid screen.

O red little lights at Carney's Point,
You glower so grim o'er the Delaware;
When the moon hides low sombrous clouds below,
Then you glow like coals o'er the Delaware.
Blood red rubies on a throat of fire,
You flash through the dusk of a funeral pyre;
And there hearth fires red whom you fear and dread
O'er the turgid flow of the Delaware?

And the lights gleamed gold o'er the river cold,
For the murk of the furnace shed a copper veil;
And the veil was grim at the great cloud's brim,
And the lights went molten, now hot, now pale.

O gold little lights at Carney's Point,
You gleam so proud o'er the Delaware;
When the moon grows wan in the eastering dawn,
Then you sparkle gold points o'er the Delaware.
Aureate filagree on a Croesus' brow,
You hasten the dawn on a gray ship's prow.
Light you streams of gold in the grim ship's hold
O'er the sullen flow of the Delaware?

And the lights went gray in the ash of day,
For a quiet Aurora brought a halcyon balm;
And the sun laughed high in the infinite sky,
And the lights were forgot in the sweet, sane calm.

I got to spend Tuesday with Dementordelta! She brought me birthday presents (Sun Creme from the Maryland Renfaire, Barbie clothes from Mount Vernon, a Geoff Hunt book) and took me out to lunch at Tara Thai, where we shared lots of tofu and curry, then did a bit of shopping (some costume jewelry, a sweater, and Kindle accessories may have been acquired), then we came back to my house and watched Pocahontas II: Journey to a New World (because she'd never seen it, and it's the only Disney made-for-video sequel I've ever found worth rewatching) and Mrs Henderson Presents (because I'd never seen it, and any film with Judi Dench and Bob Hoskins -- especially one set in a theatre in pre-WWII London -- is by definition fantastic, and I liked seeing the woman who played Watson's fiancee in Sherlock Holmes again too). In between the movies, we got Adam to tennis and ate M&M blondies that Paul made. All afternoons should be so good.

Paul made alfredo noodles and barbecue for dinner -- well, not actually using the grill since it's very, very cold outside, and not involving meat for myself and Adam -- then, since the kids had finished their homework and we missed it in the movie theater, we watched Toy Story 3. People had warned me that it was sad, but I was more shocked at how mean-spirited parts of it were, given that it's targeted at children as much as adults nostalgic for the first two Toy Story films, with which this one shares gender and cultural biases despite indications of its modernity -- we were all happy to see a plush Totoro. So the message is...stick with your friends and maybe they'll manage to get you out of terrible situations into merely traumatic ones? Or nothing lasts and the more fun you have now, the sooner the fire waits for you? I actually found Mrs Henderson Presents to be more uplifting, despite some very sad incidents based on historical events, though younger son thought it was very imaginative and said it made him think about how much less imagination he has now than as a kid. Here are some photos of the Kalmar Nyckel and her shipyard on the Christina River in Wilmington... 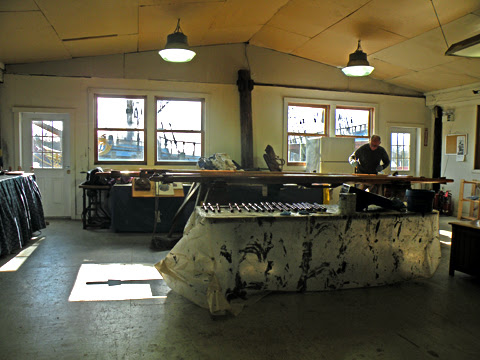 ...where she docks for restoration and repair in the winter. We've seen her during the summer at Lewes. We got to see the sails being stitched and the yards being waterproofed. We also got a tour of the visitor center, which has exhibits about the Swedish and Dutch settlements and interaction with the Native American residents of Delaware. The ship's deck was under wraps for renovations... ...though the carvings were still in place. 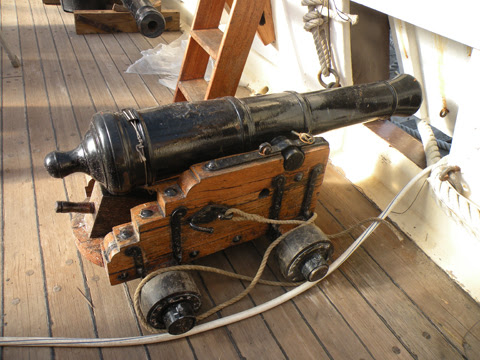 So were the guns, like this reproduction of a 1620 cannon. And the captain's cabin was fully decorated.
Posted by littlereview at 12:24 AM