The second half of my life will be black
to the white rind of the old and fading moon.
The second half of my life will be water
over the cracked floor of these desert years.
I will land on my feet this time,
knowing at least two languages and who
my friends are. I will dress for the
occasion, and my hair shall be
whatever color I please.
Everyone will go on celebrating the old
birthday, counting the years as usual,
but I will count myself new from this
inception, this imprint of my own desire.

The second half of my life will be ice
breaking up on the river, rain
soaking the fields, a hand
held out, a fire,
and smoke going
upward, always up.

I had a delightful pre-birthday morning with Gblvr, who brought me presents (jewelry and a Vera Bradley bag she knew I coveted) on the way to see The Voyage of the Dawn Treader, which was my favorite of the Chronicles of Narnia books and which I enjoyed much more than the heavy-handed Prince Caspian. Of course the fact that it centers on a tall ship and a sea voyage (with sea monsters and dragons!) is a huge point in the new film's favor, plus I was never impressed by the kid who played Peter and didn't miss him, while I thought Eustace was perfectly cast -- voice of Draco Malfoy, face of Dudley Dursley. And there was very little Aslan and a bit of the White Witch, neither of which parallels my memory of the book but both were fine with me. (Side note: Lucy and Edmund were in DC to name one of the lion cubs at the National Zoo yesterday.) When we walked out of the film to walk to Tara Thai for lunch and looked out the big windows at the back of the complex, we saw the first snowfall of the year, which was a delightful surprise! The seagulls at Washingtonian Lake did not appear particularly pleased about the first snow of the season. They were hopeful, however, that we might have popcorn or something for them... ...and flew into most of the photos I was trying to take. The Canada geese huddled at first under the trees where they were sheltered from the falling snow, though later they ventured out onto the ice. The ducks seemed to prefer standing on the ice to being in the icy water... ...though they took turns standing and swimming. 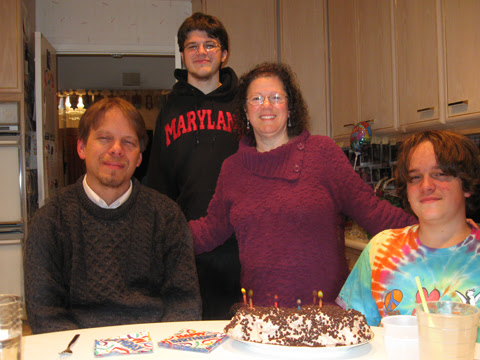 My dad took this photo of my family and my early birthday cake; in the first, Paul's eyes were closed and in the second, Daniel's head was cut off at the top, so Adam used Photoshop to produce this version!

After lunch and a bit of shopping in the bargain section of Charming Charlie, I left Gblvr and came home to post my review of "Firstborn", not Next Gen's finest hour -- stealing from the animated series rarely is -- but a better episode than I had remembered. The low point of my day was learning in the late afternoon that Daniel did not get into Penn early decision; I am trying not to hold this against my alma mater too much, considering that they received more than 4500 early decision applications and accepted less than 9 percent of those, but I'm still pretty angry right now, and now the bulk of the application-and-waiting stress begins (which I remember all too well, having been sent an early decision deferral). We had dinner with my parents (and chocolate roll, yay), and they gave me money and dichroic glass earrings. So now I just have to decide between the Kindle and Nook, and order one or the other.

TV Spoilers! I am really loving Smallville this season -- I adored the Lois/Clark engagement scene even though my kids were going, "CHEESY!" and yay for Oliver as best man, even though a lot of the episode was sad -- if I needed a redemptive moment, though, Lois saying, "Women's lib got me pants and a fair wage; I figure I'd make the most of it" would be sufficient! Sanctuary has picked up its game too, though admittedly whenever John Druitt is around, the show picks up for me, and Tesla as well. I was sure Will's old friend was going to turn out to be the villain, especially after he didn't recognize her -- I was almost disappointed when she turned out not to be in league with the priest! But he needs a friend he doesn't work with, so it's all good. I forgot to mention that anyone who missed Stephen Colbert's interview and art criticism with Steve Martin should go watch it on the web, because it's brilliant and hilarious!
Posted by littlereview at 12:19 AM