Poem for Sunday and Christmas Celebration

The minstrels played their Christmas tune
To-night beneath my cottage-eaves;
While, smitten by a lofty moon,
The encircling laurels, thick with leaves,
Gave back a rich and dazzling sheen,
That overpowered their natural green.

Through hill and valley every breeze
Had sunk to rest with folded wings:
Keen was the air, but could not freeze,
Nor check, the music of the strings;
So stout and hardy were the band
That scraped the chords with strenuous hand.

And who but listened?--till was paid
Respect to every inmate's claim,
The greeting given, the music played
In honour of each household name,
Duly pronounced with lusty call,
And "Merry Christmas" wished to all.

We spent a very nice, fairly low-key Christmas at Paul's parents' house with my parents, who came up in the late morning once it had been determined that the blizzard wouldn't hit the east coast till early Sunday morning. We spent pretty much the entire day eating with a few breaks to play Uno (both Harry Potter and Red Sox), plus younger son and I took a walk between courses to look at neighborhood decorations and take a few photos. I got to have both veggie Swedish meatballs and tofurkey and potatoes with gravy, plus cheese, lingonberries, bread, chocolate covered pretzels, cookies, and I don't even want to think about what else since Christmas calories don't count. My in-laws gave me a Bonnie Rideout CD and some money, the kids got t-shirts, we all got caramel popcorn, and a good time was had by all! A few photos: Santa and his helpers take the long way up onto a neighbor's roof in Hanover, Pennsylvania. The Holy Family was gathered on a nearby lawn. This very old house is on the grounds of the YMCA, practically across the street from my in-laws' home. We went looking for the groundhog, but he was somewhere far down in his winter hole. At this time of year, this was practically the only outdoor color that wasn't wrapped around a tree and plugged in. 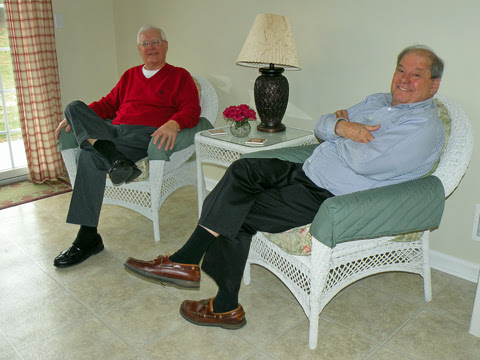 Here are my father and father-in-law waiting for dinner. 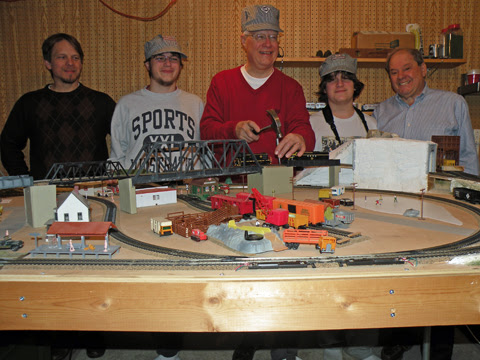 The latter decided that we had to have a golden spike ceremony to celebrate the completion of the second level of his model train display. 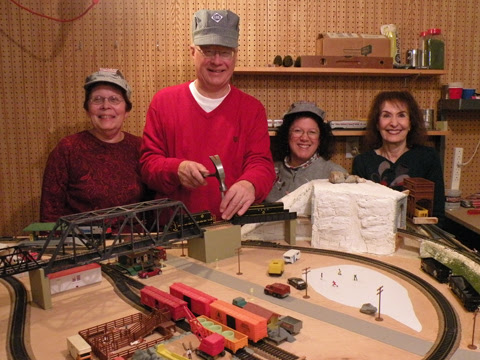 At first he insisted that it should be men only, but the women objected, so here we are too. One photo from Christmas Eve, when we made a huge mess and had a fabulous time eating cheese fondue.

We had flurries in the air for most of the day, but nothing stuck, and the big snow isn't supposed to hit till early morning -- the predictions have been anywhere from three to ten inches depending on how far east the storm moves. We came home and unpacked before 8 p.m., in part in case of icy roads and in part so we'd be here for the Doctor Who Christmas special, which BBC America was smart enough to air here the same day as Britain. We all enjoyed it, though we could not resist remarking that the franchise has finally jumped the shark -- spoilers! -- not that I object to a giant shark pulling a sleigh through the air, it's no sillier than a flying reindeer. Plus it's hard not to enjoy a holiday special that begins with, "The ship is going down. Christmas is canceled" (of course I thought of the Sheriff of Nottingham), and all the references from Dickens and earlier Doctor adventures. I generally dislike very Christmas-y Christmas specials, so the fact that this is a Christmas Carol with minimal bite doesn't distress me. Fine for fans of all ages.

I still can't take Amy seriously at all, and I don't take Eleven much more seriously. I thought the dialogue in "A Christmas Carol" was much sharper than in a lot of the previous season -- some specifically Whovian, "In 900 years of time and space I've never met anyone who wasn't important before," some just fun, "Santa Claus...or as I've always known him, Geoff" -- and casting Michael Gambon was a stroke of genius, though the whole engaged-to-Marilyn business was a pathetic shadow of married-to-Gloriana, and I'm refusing to think about how come Kazran could hug himself without causing the sort of temporal paradox that resulted from Rose holding Baby Rose. Plus I won't get started about women dying of Luminescent Gorgeous Glowing Disease because that's certainly not just science fiction -- it's Love Story and a whole host of supposedly-based-on-real-events TV movies -- but really, after all this time, can't this Doctor even face death looking like death? Having watched several Nine episodes recently, I must admit that even at his best, Matt Smith feels like Doctor Lite to me on every level -- acting, character interaction, depth of story -- fun while it lasts, but no more special than Merlin or Smallville or anything else I've watched.
Posted by littlereview at 12:32 AM