Poem for Sunday and Countryside Artisans

This is what life does. It lets you walk up to
the store to buy breakfast and the paper, on a
stiff knee. It lets you choose the way you have
your eggs, your coffee. Then it sits a fisherman
down beside you at the counter who say, Last night,
the channel was full of starfish. And you wonder,
is this a message, finally, or just another day?

Life lets you take the dog for a walk down to the
pond, where whole generations of biological
processes are boiling beneath the mud. Reeds
speak to you of the natural world: they whisper,
they sing. And herons pass by. Are you old
enough to appreciate the moment? Too old?
There is movement beneath the water, but it
may be nothing. There may be nothing going on.

And then life suggests that you remember the
years you ran around, the years you developed
a shocking lifestyle, advocated careless abandon,
owned a chilly heart. Upon reflection, you are
genuinely surprised to find how quiet you have
become. And then life lets you go home to think
about all this. Which you do, for quite a long time.

Later, you wake up beside your old love, the one
who never had any conditions, the one who waited
you out. This is life’s way of letting you know that
you are lucky. (It won’t give you smart or brave,
so you’ll have to settle for lucky.) Because you
were born at a good time. Because you were able
to listen when people spoke to you. Because you
stopped when you should have and started again.

So life lets you have a sandwich, and pie for your
late night dessert. (Pie for the dog, as well.) And
then life sends you back to bed, to dreamland,
while outside, the starfish drift through the channel,
with smiles on their starry faces as they head
out to deep water, to the far and boundless sea.

We spent a lovely Saturday at the Countryside Artisans' winter studio tour, when the Sugarloaf Mountain craft league members hold open houses -- usually with coffee and cider for guests as well as demonstrations and art displays. We started at the glassblowing studio Art of Fire, which in addition to demonstrations of vases and holiday ornaments was playing host to a dichroic glass artist, a bead-maker who was working in the studio, the Celtic art gallery Tuatha, and the pagan- and pirate-friendly Dancing Pig Pottery. Then we went to Iron Antler Forge, where we watched Daniel Stuart work on a dragon's head for a weather vane and looked at some of his amazing metalwork, including pod lamps and claw clothes hooks. A Paca Fun Farm wasn't technically part of the Countryside Artisans' tour, though we got to see a demonstration of their new felt loom and to visit with the alpacas, plus Paul got a hat as a Chanukah present. And I got rainbow-colored handwarmers at Dancing Leaf Farm, whose sheep (which provide the wool for the homespun yarn) back right up to Sugarloaf Mountain. (Daniel unsurprisingly preferred a Shin Megami Tensei game!) One of the cats at Art of Fire demonstrated who controls the jewelry case. (He was more than happy to swat at anyone who didn't get the message.) 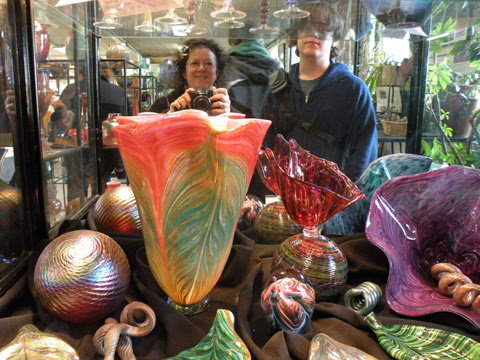 Here are Adam and I in reflection above some of the beautiful blown glasswork. Dancing Pig Pottery was in one of the smaller barns on the property along with Tuatha. This handmade dragon head at Iron Antler Forge had to be heated to 1800 degrees... ...so that it could eventually be shaped like this one... ...and, eventually, attached to a weather vane like this one. 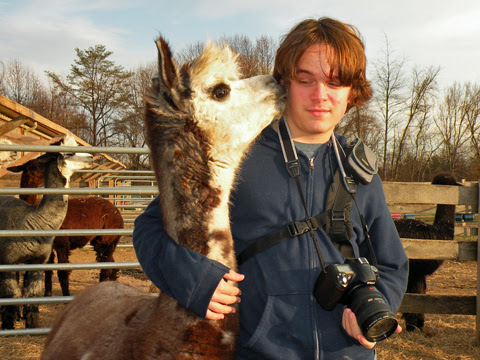 An alpaca got snuggly with Adam at A Paca Fun Farm. 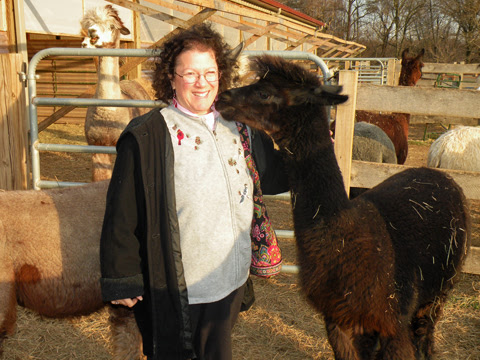 And I got a smooch too! I am not sure there is anything in the world as soft as the wool on an alpaca's neck. But the sheep at Dancing Leaf Farm, here seen in the shadow of Sugarloaf Mountain, come close.

It was already nearly dark when we got home and quite chilly, so we have leftover navy bean soup for dinner along with homemade Italian herb bread and cheese (though Adam and I were completely bummed to discover that our new favorite cheese contains animal rennet -- we never would have tried it in the first place had we known). During the early part of the ACC Championship game, we watched the two-part season finale of Merlin, "The Coming of Arthur," which I loved in some ways and didn't particularly like in others -- I imagine that it will surprise no one when I say I have some issues with how Evil Women are treated on the show vs. Evil Men, but there are lots of enjoyable aspects anyway. As soon as Arthur said "Don't be such a girl" to Merlin in regards to Merlin's not knowing what to pack for their journey to find the Holy Grail, excuse me the Cup of Life, I was rooting for Morgana and Morgause, because let's face it, they're no more evil than Uther and I want to know why Merlin and Gwen in particular are so certain they're better off under Uther's "legitimate" rule than Morgana's usurping the throne.

Of course, Morgana does unforgivable things like killing civilians and threatening to execute all the knights because it's the only way the writers can get us to root against her; I haven't liked her willingness to abuse Gwen, but it's been equally clear that Gwen's loyalty to her isn't even as deep as Gwen's loyalty to Uther, and considering that Uther killed Gwen's father and was willing to banish her a few short weeks ago -- something Gwen forgot to mention to Morgana when she was pledging false loyalty, not that Morgana deserved it because she didn't seem to remember either -- I'm not really sure why Gwen wouldn't think of Morgana's usurpation as a great excuse to get rid of Uther once and for all before bringing her beloved Arthur back. I love that Gwen can do metalworking like her father, and that Arthur seats her as an equal among his knights, though I wonder whether she'll be back to being a servant when the show returns as Merlin seems to be. The fact that Arthur is willing to fight to save Merlin when the slave trader has them is very sweet. And YAY Lancelot and Gwaine -- I hope this means they'll both be regulars next season! It'll be interesting to see for how long Uther remains a broken man...

We got back to football in time to see Virginia Tech beat Florida State, yay, then Oklahoma beating Nebraska, meh, and I'm not staying up till the end of the USC-UCLA game because we're going to Brandywine Valley museums on Sunday, whoo!
Posted by littlereview at 12:27 AM