Poem for Sunday and Lion Cubs

Chosen by the Lion
By Linda Gregg

I am the one chosen by the lion at sundown
and dragged back from the shining water.
Yanked back to bushes and torn open, blood
blazing at the throat and breast of me.
Taken as meat. Devoured as spirit by spirit.
The others will return quickly to drink again
peacefully, but for me now there is only faith.
Only the fact that the tall windows I lived
with were left uncovered halfway up.
And the silence of those days I lived there
which were marked by your arrivals like
stations on a long journey. You write to say
you love me and lie awake in stillness
to avoid the pain. I remember looking
at you from within at the last moment,
with faith like a gift handkerchief, delicate
and almost fragile. This is the final thing.
Purity and faith, power and blood. Is there
nothing to see? Not memory even of forgetting?
Only the body eating the body? What of faith
when it meets death, being when it is hard
to account for? The nipples you bit
and the body you possessed lie buried in you.
My faith shines as the moon in the darkness
on water, as the sky in the day. Does it hover
in the air around you? Does it come like
a flower in your groin? Or is it like before
when you were alone and about to fall asleep
saying out loud in the darkness, "Linda,"
and hearing me answer immediately, "Yes!"

It was warmer Saturday than most of the previous week, and we got up early to go to the National Zoo because we had a reservation to go see the lion cubs at the National Zoo -- two litters born in late summer to sisters Shera and Nababiep, fathered by Luke (a younger man). One of the cubs was named Aslan last week by the Chronicles of Narnia stars who play Edmund and Lucy, and the names of the rest were revealed today: Lusaka, Baruti, Lelie, Zuri, Fahari, and John (the last after the director who brought the parents to the National Zoo). Since we had arrived early, we got to see the giant pandas eating, the elephants walking in the snow, the young gorillas chasing each other, and dozens of other animals. Though crowds stayed away from the zoo due to the cold weather, there were over a hundred people in line to see the cubs when they arrived in their yard at 12:30 p.m., including several with camera lenses that made Adam drool with envy. I finally got to use my Nikon D50 again, since son now has his own Canon 60D: 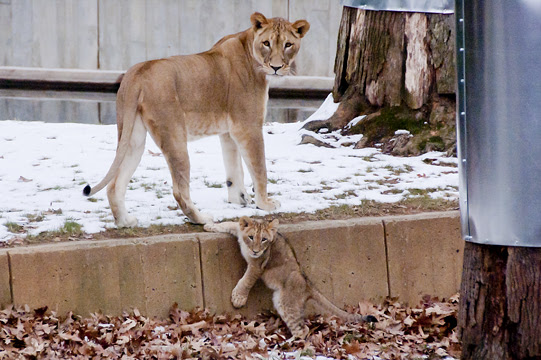 Because of the zoo schedule, we didn't get home and eat lunch till after 3 p.m. We spent the rest of the afternoon half-watching bowl games and following the awesome progress toward ending Don't Ask, Don't Tell. Meanwhile DC's sports crises continued, with Gilbert Arenas being traded to Orlando for a player who probably isn't as good but certainly hasn't been in as much trouble, and Maryland's football coach likely to be fired if he doesn't quit, possibly before their own bowl game. After the fabulous Thai food Paul made for dinner, we watched Shrek Ever After, which I really didn't like at first -- I hate male mid-life crisis movies, the fact that this male is an ogre changes nothing -- but Fiona, Warrior Princess more than makes up for that! I'd prefer a storyline where she saves herself rather than needing true love's kiss. Plus the Carpenters' "Top of the World" was one of my earliest favorite songs, and I can't help liking any movie that includes it.
Posted by littlereview at 12:02 AM