Poem for Monday and Museum of Crime

The Trail's End
By Bonnie Parker

You've read the story of Jesse James
of how he lived and died.
If you're still in need;
of something to read,
here's the story of Bonnie and Clyde.

Now Bonnie and Clyde are the Barrow gang
I'm sure you all have read.
how they rob and steal;
and those who squeal,
are usually found dying or dead.

There's lots of untruths to these write-ups;
they're not as ruthless as that.
their nature is raw;
they hate all the law,
the stool pigeons, spotters and rats.

They call them cold-blooded killers
they say they are heartless and mean.
But I say this with pride
that I once knew Clyde,
when he was honest and upright and clean.

But the law fooled around;
kept taking him down,
and locking him up in a cell.
Till he said to me;
"I'll never be free,
so I'll meet a few of them in hell"

The road was so dimly lighted
there were no highway signs to guide.
But they made up their minds;
if all roads were blind,
they wouldn't give up till they died.

The road gets dimmer and dimmer
sometimes you can hardly see.
But it's fight man to man
and do all you can,
for they know they can never be free.

If a policeman is killed in Dallas
and they have no clue or guide.
If they can't find a fiend,
they just wipe their slate clean
and hang it on Bonnie and Clyde.

There's two crimes committed in America
not accredited to the Barrow mob.
They had no hand;
in the kidnap demand,
nor the Kansas City Depot job.

A newsboy once said to his buddy;
"I wish old Clyde would get jumped.
In these awfull hard times;
we'd make a few dimes,
if five or six cops would get bumped"

The police haven't got the report yet
But Clyde called me up today
He said, "Don't start any fights, we aren't
working nights, we're joining the NRA."

From Irving to West Dallas viaduct
Is known as the Great Divide
Where the women are kin, and men are men
And they won't stool on Bonnie and Clyde.

If they try to act like citizens
And rent a nice flat
About the third night they're invited to fight
By a sub-gun's rat-tat-tat.

They don't think they're tough or desperate
They know the law always wins
They've been shot at before, but they do not ignore
That death is the wages of sin.

Some day they'll go down together
And they'll bury them side by side
To few it'll be grief, to the law a relief
But it's death for Bonnie and Clyde.

We had vouchers from The Capitol Deal, so on Sunday we went to the Museum of Crime and Punishment downtown. I must confess that it is not my favorite DC museum, even less so than the Spy Museum -- it certainly does not highlight human nature at its best, and as depressing as I found the medieval and Wild West galleries of torture devices and guns, the exhibits on capitol punishment and the forensics gallery, plus the set of America's Most Wanted, are even more so. Still, I learned quite a bit about the development of the American prison and the displays on crime in popular entertainment (where the criminals are nearly always the protagonists) are very interesting. 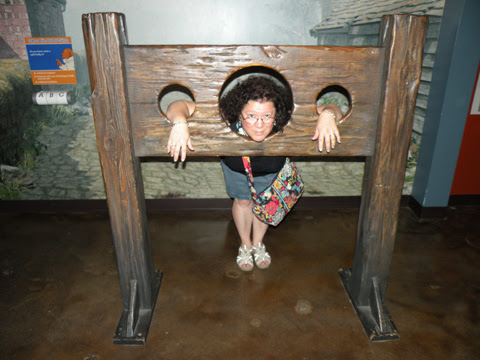 Here I am in the stocks at the National Museum of Crime & Punishment... 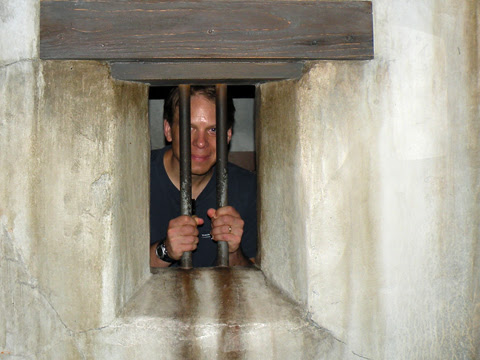 ...and here is Paul in a replica of the old Cochise County Jail. 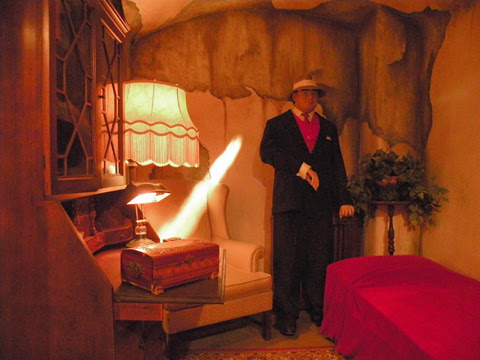 Al Capone is a replica as well, in a replica of his prison cell. 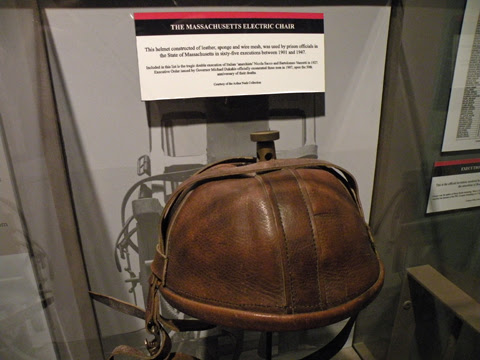 However, this is the authentic helmet constructed of leather and wire mesh used by prison officials for 65 executions in the Massachusetts electric chair. Here are J. Edgar Hoover's FBI Academy cufflinks, on display in the exhibit on law enforcement.

Name that celebrity mug shot! The pictures lift up so you can confirm who's who. (Yes, that's Bill Gates below Jim Morrison -- why they took a mug shot for a traffic violation, we couldn't figure out.) 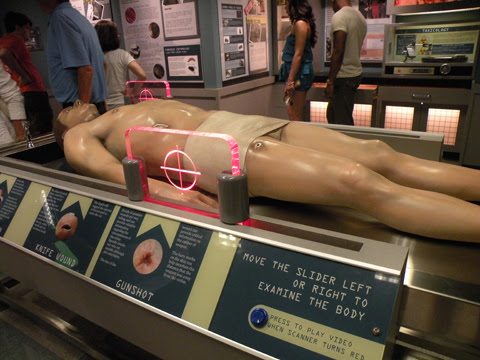 The "corpse" in the CSI lab -- part of an exhibit in which visitors are shown a videotape of a criminal escaping and asked to help "solve" the crime based on the evidence. 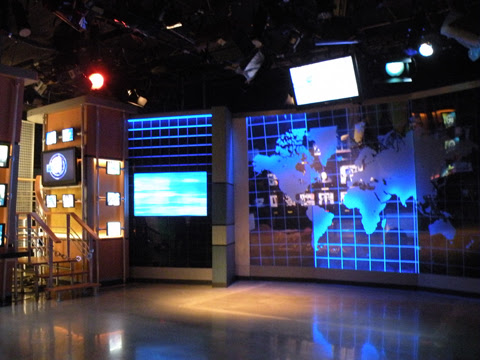 The museum serves as the television studio for America's Most Wanted, which is mostly filmed on location, though host John Walsh still visits sometimes for segments.

We stopped for Starbucks on the way back to the car, which we had parked several blocks away, then came home and had hot dogs (well, veggie dogs) for dinner. Then we watched this week's episode of Queen & Country, "The Queen's Possessions," then the first episode of Political Animals, because I cannot resist Sigourney Weaver and Carla Gugino as the Secretary of State and a political reporter respectively, and to my delight, I discovered that Ciaran Hinds is the love child of Bill Clinton and John Edwards, and Nathan Petrelli is finally the President of the United States. So I will definitely be tuning in again next week.
Posted by littlereview at 12:05 AM