I sniff after the sparrow and the spaniel, flitting around,
barking, digging up the dirt: how could I not be
at one with them? But I'm a spendthrift too, rummaging about

old sport coats, selecting a style, a clash of styles—
in a private moment trying to decide who I am today by trying on
something discarded, something nobody treasured—

I think I want everyone and everything to be loved so much
I get dour, chastising, dark, and sometimes hate
so much I can't go for a stroll without recycling the moment

they dropped acid on my palm, the thousand ways I could ease
their demise—dipping them into a river of invective
that seems futile and enticing—whether it’s the Secretary of State

or a species of white shirts and thin black ties who exude smugness,
who quote from the bible as if it were the Bible. It's like having an affair—
they all end badly, don't they?—thereby the passion flies out of me

like an open window in February: take the heat, world,
disperse it before I undress another thought.

Sunday was a balmy 99 degrees! Well, according to my phone. According to the mall viewscreen it was 101. I had a nice indoor day, though, because after a quiet morning during which Adam went to play tennis early with my father, then we watched the Wimbledon men's final -- I was rooting for Murray but in all honesty I haven't watched more than 10 minutes of the tournament earlier in the week. While we were watching the ceremonies at the end, I got a text from Gblvr telling me that she was in the area, so after brunch I went to meet her and Wolfshark at the aforementioned mall, where we shopped a bit and caught up.

PBS reran the first episode of Queen and Country, which we'd missed last week, so we watched that and then the second episode which was on in the evening. Adam's girlfriend came over for dinner -- she has power now but no air conditioning at home -- and as we were finishing, two other friends of his came over so it was quite noisy for a while. I was having a Sharpe craving so after everyone went home we watched Sharpe's Eagle, which remains utterly awesome. And here, finally, is my anniversary card which Paul made for me -- belatedly, since we had no power over our anniversary a week ago -- featuring lots of Colin Firth! 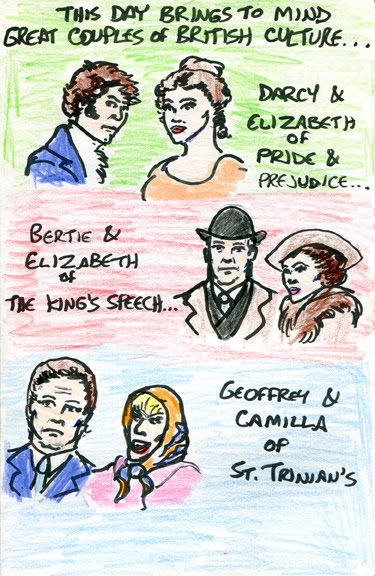 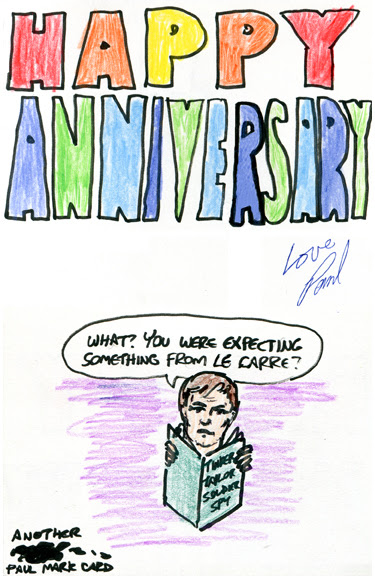