I hear America singing, the varied carols I hear,
Those of mechanics, each one singing his as it should be blithe and strong,
The carpenter singing his as he measures his plank or beam,
The mason singing his as he makes ready for work, or leaves off work,
The boatman singing what belongs to him in his boat, the deckhand singing on the steamboat deck,
The shoemaker singing as he sits on his bench, the hatter singing as he stands,
The wood-cutter's song, the ploughboy's on his way in the morning, or at noon intermission or at sundown,
The delicious singing of the mother, or of the young wife at work, or of the girl sewing or washing,
Each singing what belongs to him or her and to none else,
The day what belongs to the day—at night the party of young fellows, robust, friendly,
Singing with open mouths their strong melodious songs.

Our power is going on and off as crews work on the neighborhood down the road from us so I must keep this very brief. We had a very nice Independence Day: got up early because Adam was running in a 5k charity race for Autism Speaks, all had brunch afterward with his girlfriend Maddy. Then we all went to see Brave together, which I loved; the characters were definitely kids-movie depth and Merida's not going to beat out Mulan for me as heroines go, but I loved that the story was entirely about the relationship between the women rather than about anyone's love interest even if the expectations were quite patriarchal, and I adored the setting, the stone circles, the bagpipes, the archery.

In the evening we went to Maddy's house for dinner. Her family still doesn't have power back and has a one-month-old baby, so we had been warned to prepare for mild chaos, but it was very nice and relaxed -- we've really only spent time with her parents while picking up or dropping off kids before. Her father grilled burgers and we wound up trying to put s'mores together by candlelight, though the chocolate was pretty melted and the marshmallows were sticking together. We could partially see the fireworks at Congressional Country Club through the trees -- privately owned fireworks are illegal in Maryland -- but we were happier to see utility trucks working on the power lines! Here are a couple of photos: 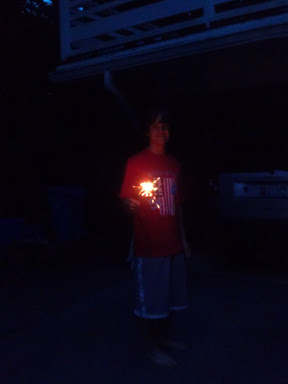 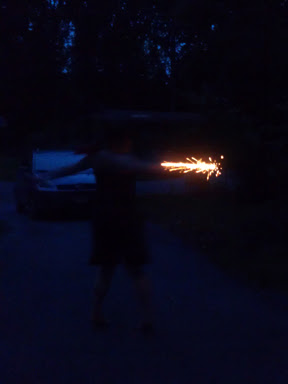 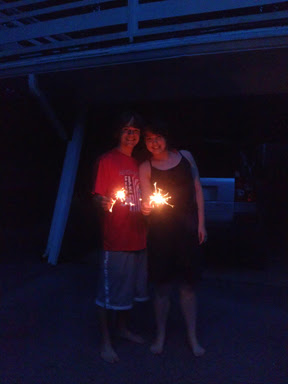