Poem for Wednesday and Birthday Card

For K.R. On Her Sixtieth Birthday
By Richard Wilbur

Blow out the candles of your cake.
They will not leave you in the dark,
Who round with grace this dusky arc
Of the grand tour which souls must take.

You who have sounded William Blake,
And the still pool, to Plato's mark,
Blow out the candles of your cake.
They will not leave you in the dark.

Yet, for your friends' benighted sake,
Detain your upward-flying spark;
Get us that wish, though like the lark
You whet your wings till dawn shall break:
Blow out the candles of your cake.

I had a nice, fairly low-key day, working on holiday cards and doing a bit of shopping at Giant and CVS, which are right near Goldberg's Bagels, from whom I had a coupon for a free bagel and cream cheese for my birthday, so guess what I had for lunch? Paul had offered to take me out but that might have interfered with dinner, since we had to fight Beltway traffic to get to Adam in College Park. We went with him to the fantastic Woodlands Restaurant, which is all-vegetarian Southern Indian food in Langley Park, where we shared a masala dosa and malai kofta plus chana masala and paneer pakora, all exceptional. Birthdays are so fun in the age of Facebook; I am still catching up on posts and comments from people I doubt knew when my birthday was when we were at school or working together!

I did not, however, do a birthday fundraiser, having realized that if I gave everyone's fundraiser a dollar, I'd be out nearly $800 without ever donating to my own causes. We got home in time for most of the Supergirl part of the "Elseworlds" crossover -- not sure exactly which Earth they were on but I liked Kara and Alex's scenes and I liked Clark vs. Clark, though wanted more Lois (and am sorry they didn't play Remy Zero again). Then we Skyped with Daniel, so we missed this week's Black Lightning and decided to catch up on the Doctor Who season finale, which I liked better than the previous episode though it was a little uneven. Paul got me an awesome present, the Norton Facsimile of the First Folio of Shakespeare which we'd seen at the Folger, and he drew me this: 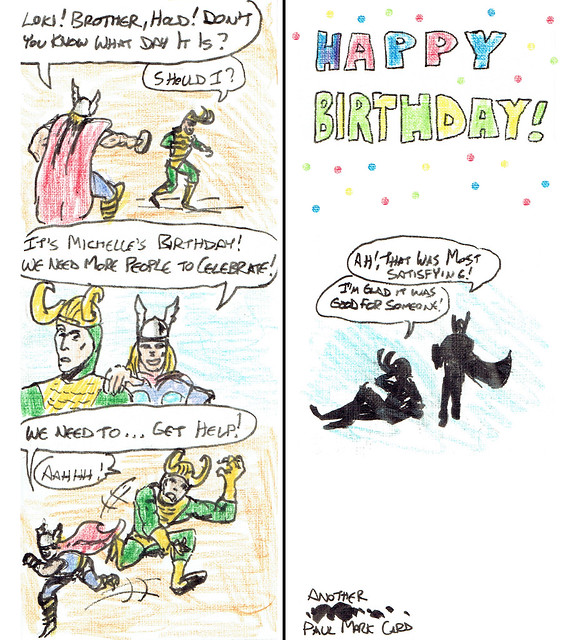