Poem for Tuesday and Jefferson's Birthday

In Otto's Basement
By Louis Simpson

At the meeting of the village board
last night in Otto's basement
when they were discussing a building violation --
Why hasn't the building inspector reported?
The village lawyer is waiting to hear from him.
The inspector has to be told to "get off the pot" --
a picture drifted into my mind
from some Latin American country,
of men tied to posts, about to be shot.
Or perhaps it was Africa, or Afghanistan.
So we endure it. This is what Jefferson
and Lincoln had to endure,
sitting and listening to people
argue . . . the cost of conversion from oil to coal
and the statement by the tree-trimming committee.
If you want to know what freedom cost
look for us here, under the linoleum.
Dig between the end of the table
and the wall of some brown material
grained like wood, with imitation knotholes.

I have spent all day Monday trying unsuccessfully to catch up from a week of spring break -- in my defense, the weather was too gorgeous not to walk outside (bunnies! crab apple blossoms! tulips!) and my father invited me out to lunch, which we ate at Mosaic Cafe which has eggs benedict waffles, one of the best things ever invented (I had mine with feta cheese instead of Canadian bacon, yum). So the laundry is not folded, the request form for extra tickets to son's graduation has not been sent in, and the cats have by their own account been severely neglected. On a positive note, I have discarded nearly 1000 surplus spring break photos.

Adam has only a few days left to make a decision about college -- he is down to Michigan (his first choice, but he'd end up many thousands of dollars in debt), Syracuse (very highly ranked communications but not as highly ranked marketing, though they have offered him a nice scholarship), Indiana (highly ranked marketing but lower rankings overall, though they also offered him a scholarship), and Maryland (much too close to home for his tastes, but it's well-ranked, he got into every honors program they offer, and he has a great scholarship offer there). He is understandably somewhat stressed out about this and so are we!

When we went to the cherry blossom festival the weekend before last, there was a celebration going on at the Jefferson Memorial, which we discovered was to commemorate Jefferson's birthday. I always knew when he died -- the Fourth of July, the same day as John Adams -- yet somehow I had not known when he was born. Here are some photos from after the ceremony, from which we were at too much of a distance to get decent photos! 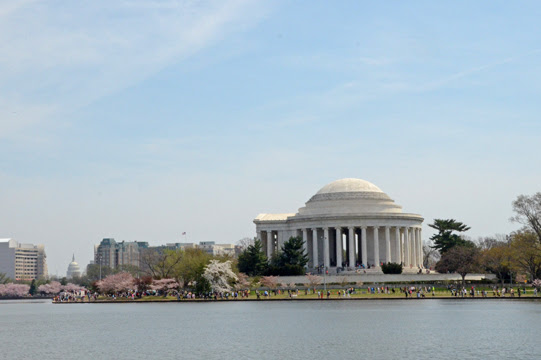 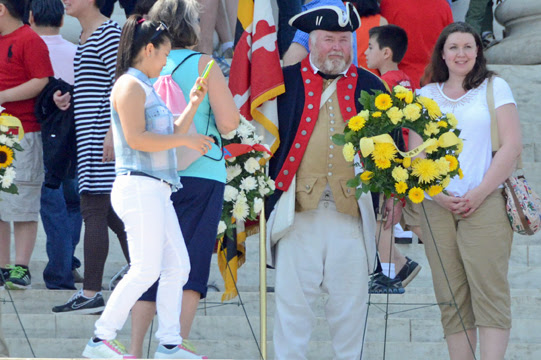 ...while descendants of Jefferson, including at least one current Virginia politician, gathered to celebrate. 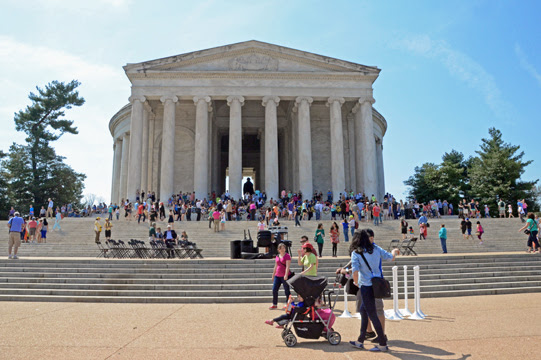 Jefferson had many visitors for his birthday, though even his relative admitted most of them were probably there for the National Cherry Blossom Festival. 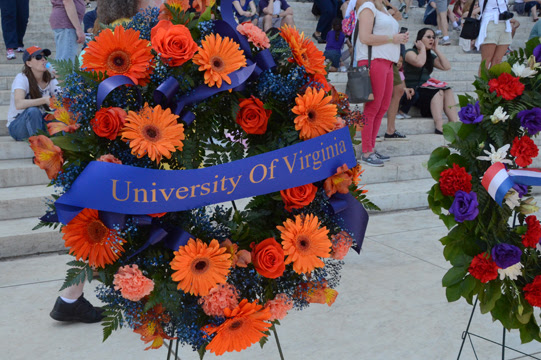 Associations linked to Jefferson honored his life, like the University of Virginia, in Cavaliers orange and blue... 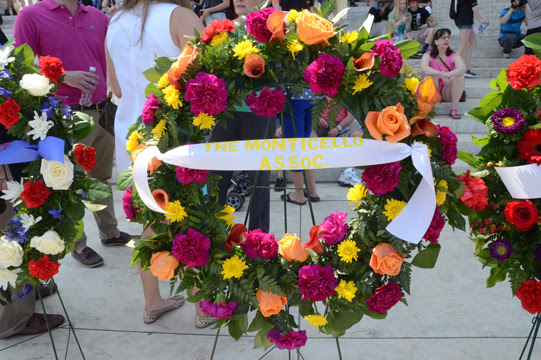 And the association for Monticello, his home in Charlottesville.