Poem for Monday and Countryside Artisans

A pleasant smell of frying sausages
Attacks the sense, along with an old, mostly invisible
Photograph of what seems to be girls lounging around
An old fighter bomber, circa 1942 vintage.
How to explain to these girls, if indeed that’s what they are,
These Ruths, Lindas, Pats and Sheilas,
About the vast change that’s taken place
In the fabric of our society, altering the texture
Of all things in it? And yet
They somehow look as if they knew, except
That it’s so hard to see them, it’s hard to figure out
Exactly what kinds of expressions they’re wearing.
What are your hobbies, girls? Aw nerts,
One of them might say, this guy’s too much for me.
Let’s go on and out, somewhere
Through the canyons of the garment center
To a small cafe and have a cup of coffee.
I am not offended that these creatures (that’s the word)
Of my imagination seem to hold me in such light esteem,
Pay so little heed to me. It’s part of a complicated
Flirtation routine, anyhow, no doubt. But this talk of
The garment center? Surely that’s California sunlight
Belaboring them and the old crate on which they
Have draped themselves, fading its Donald Duck insignia
To the extreme point of legibility.
Maybe they were lying but more likely their
Tiny intelligences cannot retain much information,
Not even one fact, perhaps. That’s why
They think they’re in New York. I like the way
They look and act and feel. I wonder
How they got that way, but am not going to
Waste any more time thinking about them.
I have already forgotten them
Until some day in the not too distant future
When we meet possibly in the lounge of a modern airport,
They looking as astonishingly young and fresh as when this picture was made
But full of contradictory ideas, stupid ones as well as
Worthwhile ones, but all flooding the surface of our minds
As we babble about the sky and the weather and the forests of change.

I spent Sunday morning trying to get caught up on things but hardly made a dent. I have address labels ready to go but not yet printed, I have my new birthday present potion bottle lamp on my desk but not yet hooked up, I have a whole bunch of things rearranged in hope of stopping the kittens from pouncing on them but kittens are more resourceful than I am. Maryland-themed pottery at Something Earthy... 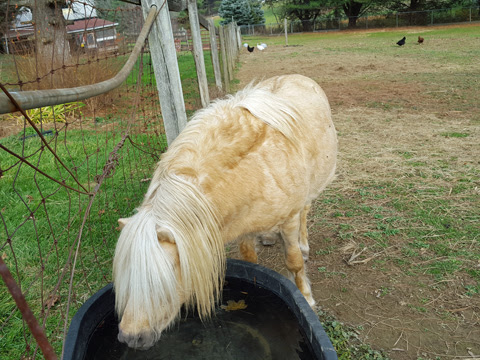 ...a pottery and crafts studio that has chickens, guineafowl, goats, and a pony outside on the farm. 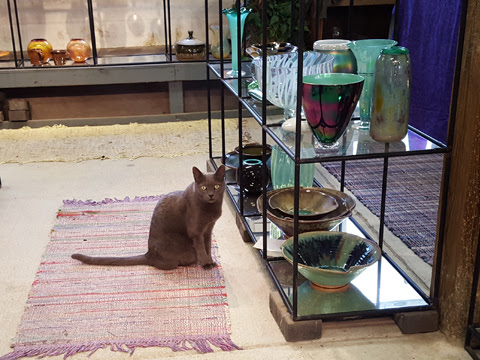 One of the resident cats at Art of Fire glass studio... 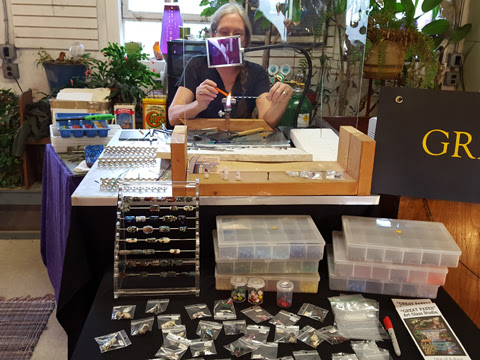 ...which had several visiting artisans, some of whom people may know from the Maryland Renfaire like Allen Ye Printmaker and Tuatha Gallery. 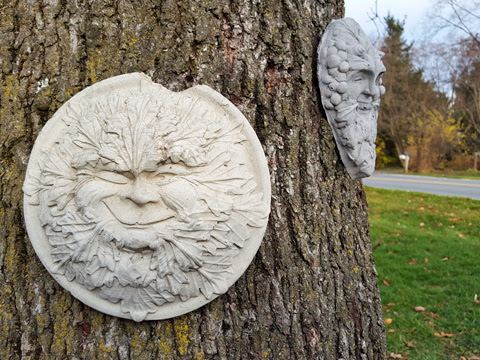 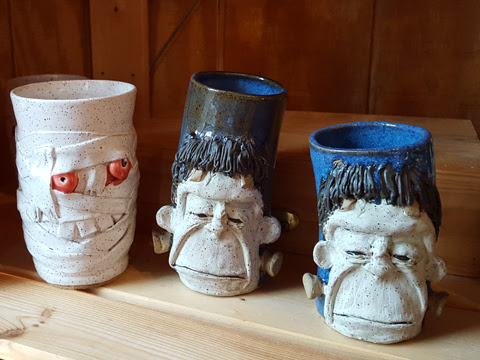 ...as well as goblets, mugs, jugs, tureens, and all sorts of serving dishes. 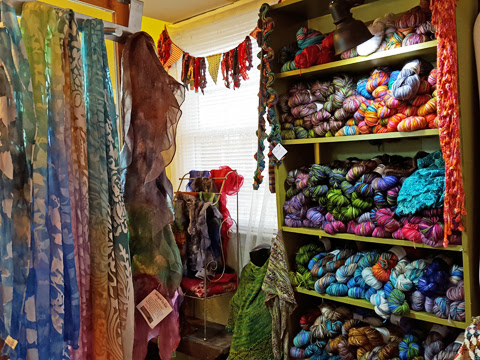 Since I don't knit, I usually end up buying jewelry and decorations at Dancing Leaf Farm, but it's most famous for the felting and yarn... 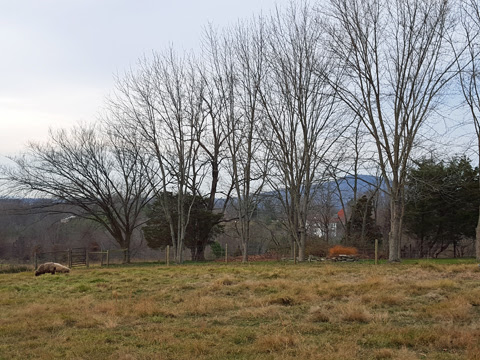 ...made from the wool of these sheep in the shadow of Sugarloaf Mountain.

We stopped at Kohl's on the way home to return something and picked up some food, then had black pepper burgers and macaroni for dinner before watching Madam Secretary, which was stressful, and the New England game, which was anticlimactic (we didn't see any of the Ravens' loss or Washington's win). An old friend lost his husband and a neighbor is ill -- so hard in this season.