The Drunken Boat
By Arthur Rimbaud
Translated by Oliver Bernard

As I was floating down unconcerned Rivers
I no longer felt myself steered by the haulers:
Gaudy Redskins had taken them for targets
Nailing them naked to coloured stakes.

I cared nothing for all my crews,
Carrying Flemish wheat or English cottons.
When, along with my haulers those uproars were done with
The Rivers let me sail downstream where I pleased.

Into the ferocious tide-rips
Last winter, more absorbed than the minds of children,
I ran! And the unmoored Peninsulas
Never endured more triumphant clamourings

The storm made bliss of my sea-borne awakenings.
Lighter than a cork, I danced on the waves
Which men call eternal rollers of victims,
For ten nights, without once missing the foolish eye of the harbor lights!

Sweeter than the flesh of sour apples to children,
The green water penetrated my pinewood hull
And washed me clean of the bluish wine-stains and the splashes of vomit,
Carrying away both rudder and anchor.

And from that time on I bathed in the Poem
Of the Sea, star-infused and churned into milk,
Devouring the green azures; where, entranced in pallid flotsam,
A dreaming drowned man sometimes goes down;

Where, suddenly dyeing the bluenesses, deliriums
And slow rhythms under the gleams of the daylight,
Stronger than alcohol, vaster than music
Ferment the bitter rednesses of love!

I have come to know the skies splitting with lightnings, and the waterspouts
And the breakers and currents; I know the evening,
And Dawn rising up like a flock of doves,
And sometimes I have seen what men have imagined they saw!

I have seen the low-hanging sun speckled with mystic horrors.
Lighting up long violet coagulations,
Like the performers in very-antique dramas
Waves rolling back into the distances their shiverings of venetian blinds!

I have dreamed of the green night of the dazzled snows
The kiss rising slowly to the eyes of the seas,
The circulation of undreamed-of saps,
And the yellow-blue awakenings of singing phosphorus!

I have followed, for whole months on end, the swells
Battering the reefs like hysterical herds of cows,
Never dreaming that the luminous feet of the Marys
Could force back the muzzles of snorting Oceans!

I have struck, do you realize, incredible Floridas
Where mingle with flowers the eyes of panthers
In human skins! Rainbows stretched like bridles
Under the seas' horizon, to glaucous herds!

I have seen the enormous swamps seething, traps
Where a whole leviathan rots in the reeds!
Downfalls of waters in the midst of the calm
And distances cataracting down into abysses!

Glaciers, suns of silver, waves of pearl, skies of red-hot coals!
Hideous wrecks at the bottom of brown gulfs
Where the giant snakes devoured by vermin
Fall from the twisted trees with black odours!

I should have liked to show to children those dolphins
Of the blue wave, those golden, those singing fishes.
- Foam of flowers rocked my driftings
And at times ineffable winds would lend me wings.

Sometimes, a martyr weary of poles and zones,
The sea whose sobs sweetened my rollings
Lifted its shadow-flowers with their yellow sucking disks toward me
And I hung there like a kneeling woman...

Almost an island, tossing on my beaches the brawls
And droppings of pale-eyed, clamouring birds,
And I was scudding along when across my frayed cordage
Drowned men sank backwards into sleep!

But now I, a boat lost under the hair of coves,
Hurled by the hurricane into the birdless ether,
I, whose wreck, dead-drunk and sodden with water,
neither Monitor nor Hanse ships would have fished up;

Free, smoking, risen from violet fogs,
I who bored through the wall of the reddening sky
Which bears a sweetmeat good poets find delicious,
Lichens of sunlight [mixed] with azure snot,

Who ran, speckled with lunula of electricity,
A crazy plank, with black sea-horses for escort,
When Julys were crushing with cudgel blows
Skies of ultramarine into burning funnels;

I who trembled, to feel at fifty leagues' distance
The groans of Behemoth's rutting, and of the dense Maelstroms
Eternal spinner of blue immobilities
I long for Europe with it's aged old parapets!

I have seen archipelagos of stars! and islands
Whose delirious skies are open to sailor:
- Do you sleep, are you exiled in those bottomless nights,
Million golden birds, O Life Force of the future? -

But, truly, I have wept too much! The Dawns are heartbreaking.
Every moon is atrocious and every sun bitter:
Sharp love has swollen me up with heady langours.
O let my keel split! O let me sink to the bottom!

If there is one water in Europe I want, it is the
Black cold pool where into the scented twilight
A child squatting full of sadness, launches
A boat as fragile as a butterfly in May.

I can no more, bathed in your langours, O waves,
Sail in the wake of the carriers of cottons,
Nor undergo the pride of the flags and pennants,
Nor pull past the horrible eyes of the hulks.

It rained all day on Tuesday and was rarely brighter than dark gray. My entire day was about work and chores, enlivened only by having kittens and deciding with Paul, since he was working from home, to watch Exodus: Gods and Kings during lunch and laundry-folding. It was about as terrible as you've heard -- embarrassing brown-face actors playing Egyptians, Sigourney Weaver wasted though the women's roles are marginally better than those in The Ten Commandments, too many orc battles.

I'm enjoying the Flash-Arrow crossover though it's a shame Supergirl can't be involved as well (and thinking Legends of Tomorrow may be overkill on the superhero shows, particularly since Agents of SHIELD was mostly good and unexpected apart from two sexist gimmicks that get used way too often as a catalyst for characters). For everything irritating me about Once Upon a Time this season, at least it refrains from those. Here are some photos from the boat ride at Black Hill Regional Park during the summer: 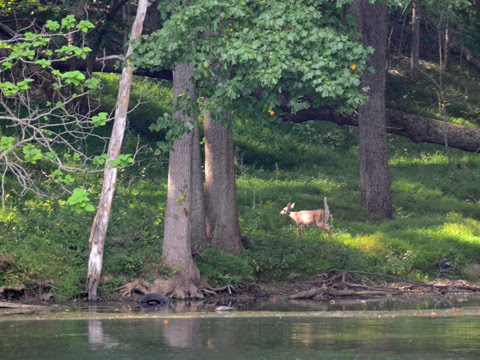 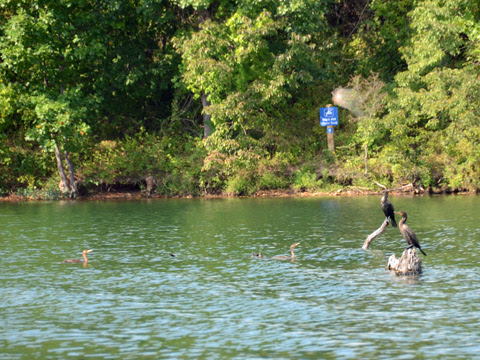 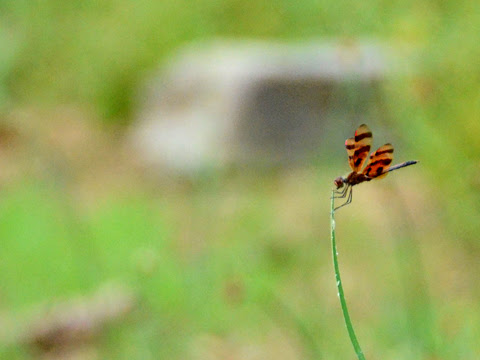 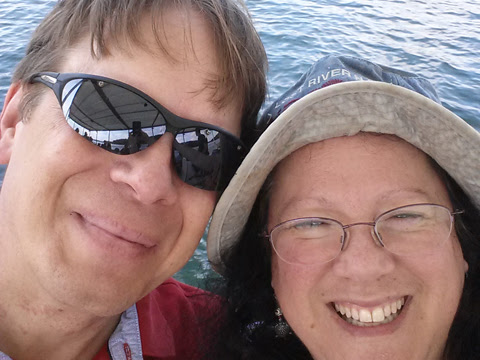 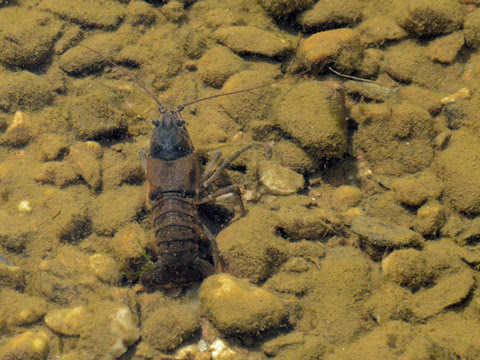 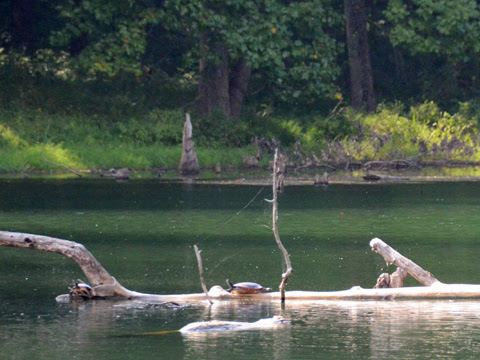 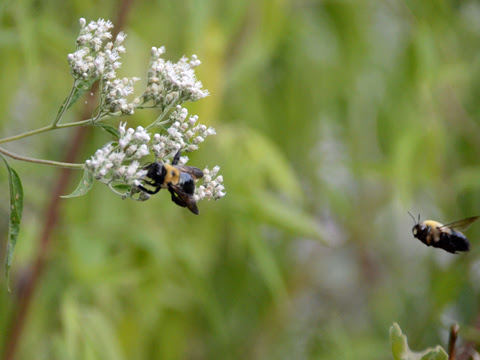 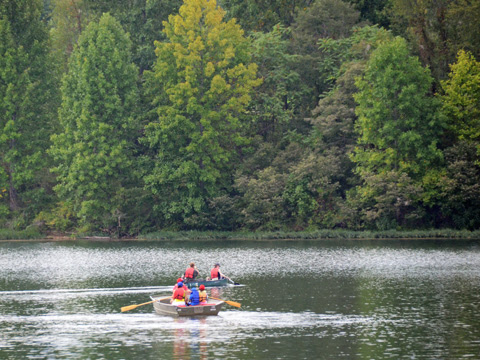